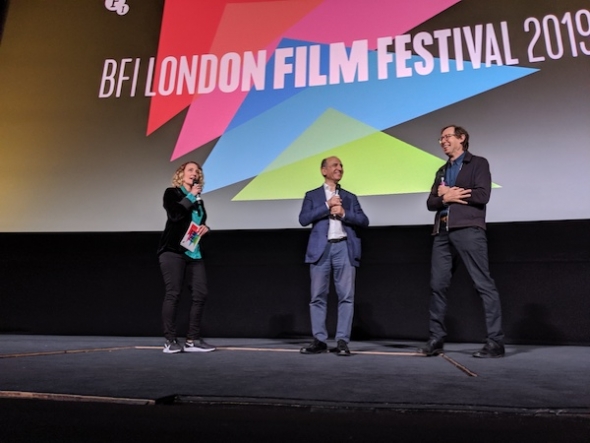 DIRECTOR Armando Iannucci, whose film, ‘The Personal History of David Copperfield’, with Dev Patel in the lead role, and which opens the London Film Festival (LFF) tonight, said in terms of casting the central role, he had no Plan B.

At a press conference in the Odeon Luxe in Leicester Square immediately after the press screening, he said he could think of no better actor to play David Copperfield than Patel himself.

“He is almost in every scene, from slapstick to vulnerable, he is David Copperfield,” Iannucci declared.

He said he had loved Charles Dickens, the author of the novel, ’David Copperfield’ for a long time and had returned to it about ten years ago.

“It seemed very cinematic, modern and experiemental,” he said.

It inspired him to construct a screenplay but focus on what was strong and would work on screen.

“It’s a 900-page novel and we wanted to extract the best and remove what wasn’t.”

He said that the all-star cast which also includes Tilda Swinton, Peter Capaldi, Hugh Laurie, and Ben Whishaw, had got together prior to screening.

“We had two weeks in a church,” he disclosed, “playing the characters off each other.”

He felt that this all helped in what he thought was the biggest challenge of the film as a director – keeping the “musicality of the film”, maintaining its rhythm and getting a sense of a period piece with a difference.

There is indeed a subversive, political element to Iannuccci’s film – it has a diverse cast, led by a British Asian man, playing a quintessentially British/English character. Iannucci has said before he wanted to change the character of these cinematic period pieces for which Britain is famed.

In focusing on comedy, eccentricity, decency and the shape and nature of friendship, Iannucci’s film is an ode to a different kind of Britain: gentler, kinder and funnier.

It does not shy away from the inequalities and injustices of the time and reminds us that the fight against poverty is far from over.

In the closing credits there is a reference to Shelter, the campaigning organisation and charity which seeks to address homelessness and poor housing.

Iannucci said he had researched the subject for the film and had discovered that things had not changed hugely.

“The laws are still heavily in the favour of landlords,” he reflected.

At one point, Copperfield finds himself homeless and has to seek refuge with family.

The Victorian author also raised the spectre of mental illness – another subject that is raised in the film through one of the characters.

In one sense, Iannucci is puncturing the myth that the Victorian age was a golden age – Dickens was one of its sharpest critics – and in doing so, reminds us that he (Dickens) has much to say that remains relevant today.

The film will go on general release in January 2020 – only rush tickets and returns remain for its LFF screenings.

Dev Patel and Armando Iannucci speak to acv on the red carpet for the world premiere of their film, ‘The personal history of David Copperfield’

Preparations under way, got that LFF feeling?