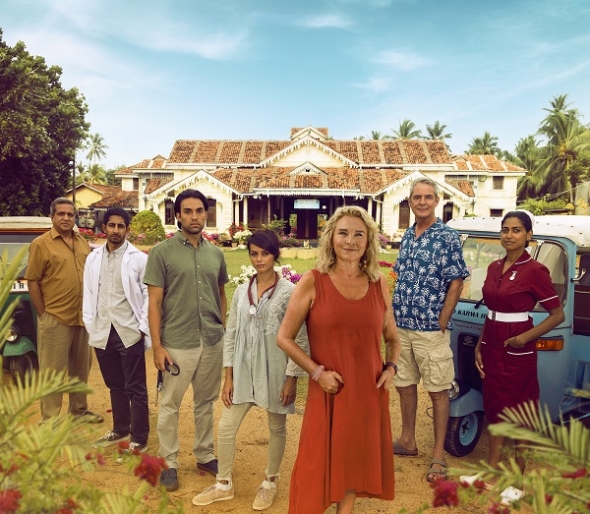 Can we be entertained and diverted by a hospital-based drama (in an exotic location) that had much to recommend it previously…?

Set in India, in the south-western state of Kerala (but shot on location in Sri Lanka), the third series promises an ‘explosion’ between two of its young(ish) central characters, doctors – ‘Ruby Walker’ (Amrita Acharia) and ‘Gabriel Varma’ (James Krishna Floyd).

For many viewers this is the central relationship or ‘non-relationship’ in which all others will constellate (to a lesser or greater degree).

Now in this series, their relationship moves to a new phase – and while it is obvious there is some level of physical heat between the two – the relationship’s development is hampered by a new arrival in the form of another able and glamorous woman doctor – who shares a past with Dr Verma…

As we know Floyd’s character is driven, idealistic and isn’t afraid to speak his mind – and there is a backstory of hurt and emotional bruising, but it has not been much explored or only indirectly, until now…

Acharia’s character is actually returning to the hospital having finally found her Indian family… and it is her sister’s impending birth that forces her to go back to the Good Karma Hospital but will it all end well?

While for many, these two will be the central interest – there is another romantic couple whose lives seemingly hang in the balance.

Actor Neil Morrissey is the slightly dissolute beach bar owner (Greg McConnell), while Dr Lydia Fonesca (Amanda Redman) is one of the founders of the Good Karma Hospital and is dedicated, caring and smart.

These two enjoy an on-off romance and Morrissey’s character is the one keen on commitment and a ring and noble intentions (to a point…), while Redman’s is rather cooler on the idea of commitment – and much preferred to live in the moment and keep the romance at a simmering temperature.

Away from the romantic lives of these characters, there is also the tension between ‘Dr Ram’ (who is the other co-founder of the Good Karma Hospital) and played by Darshan Jariwalla and his on-screen son ‘AJ’ (Sagar Radia).

Radia’s AJ is no longer the playboy character and is returning as a junior doctor to follow in his father’s footsteps. Can he step up to the responsibility and make Dad (Jariwalla) proud?

Over the next six weeks we will find out…

Episode 1 ITV preview
After months away with her family, Ruby returns to the hospital for her pregnant sister to give birth. When a life and death medical crisis unfolds, it will force Ruby to see where her loyalty lies. Plus, Greg gets a surprise family visitor.

Privacy & Cookies: This site uses cookies. By continuing to use this website, you agree to their use.
To find out more, including how to control cookies, see here: Cookie Policy
← ‘La Soiree’ (review) – Variety show that tickles and stimulates… sometimes quite literally!
‘Diversity Not Fascism’ – Artist Manou Marzban’s German war helmet series shows in the UK for the first time… →