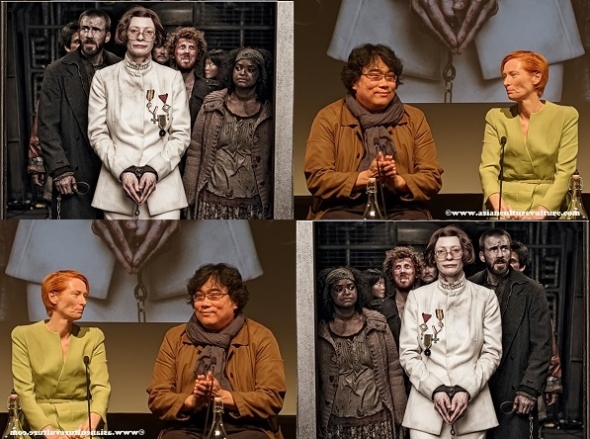 IN A HIGHLY informative and entertaining post screening discussion at the BFI Southbank, newly conferred Oscar-winning director Bong Joon Ho covered his working methods, his professional relationship with British actor Tilda Swinton and had some pithy (and comic) advice for aspiring filmmakers.

He also confessed to proudly lying to disgraced movie mogul and jailed sex offender Harvey Weinstein, who acquired the rights for ‘Snowpiercer’, in the West and wanted changes.

Following the screening of his 2013 Korean-English $40million (£35m) blockbuster ‘Snowpiercer’, director Bong was joined on stage last Sunday (March 1) by Swinton, whose work is the subject of a BFI retrospective this month, moderator and film critic Jonathan Romney and director Bong’s UK English translator.

Swinton has a relatively short but affecting cameo role in ‘Snowpiercer’.
She plays a deranged scientific figure called ‘Mason’ who speaks with a very thick Yorkshire accent and pledges ultimate loyalty to ‘Wilford’ (Ed Harris), the eccentric billionaire who controls the Snowpiercer train.

Set sometime in the near future, the world has become a frozen wasteland and the only thing that remain are old buildings and snow and ice – and crucially a high altitude train track.

Built by Wilford, it is the only place for sentient life and its sprawling train carriages carries an unusual human cargo divided into very distinct compartments – with Wilford himself at the very front and in control of the mythical engine (and nerve centre), while ordinary folks are shunted to the back and force fed a diet of congealed block fish protein.

Basically, the story follows a group of people who want to get to the front and take control of their own destiny but face huge obstacles to do so. There are armed guards blocking their path.

Based on a French graphic novel, the film mashes and mixes up conventional genres, making it virtually unclassifiable.

Swinton is just one of several figures who determines to stop the group in their tracks.

Director Bong (he was on the directors’ jury) and Swinton (who was there with a film) first met at the Cannes Film Festival and immediately struck a rapport.

Originally, Mason was written for a man, but Swinton convinced director Bong she could play the part and added much to it, saying her character was partially based on an outlandish version of one-time British prime minister Margaret Thatcher – no love lost there for Swinton.

Director Bong explained that he wrote his stories in coffee shops and liked to have chatter and people around him. He also said that before he shot any film, he would make extensive storyboards – which narrate the visual sequences. For him, films started with an idea.

Both Bong and Swinton discussed their working method on the film – there were no rehearsals and Bong preferred to let the actors interpret the characters and do what they wanted.

Early in the film, Mason (Swinton) is about to start a speech to the lumpen proletariat (for want of a better a description to describe the revolting group) – that can only be of seven minutes duration (it isn’t explained why), but as she begins, one of her assistants drops a metallic object and there is laudable clang. Director Bong said this was not in the script – but he liked the effect and said it typified his style of shooting and filmmaking – to be in the moment and to capture real expressions and reactions.

Director Bong admitted there were similarities between his Oscar winning film, ‘Parasite’ and ‘Snowpiercer’.

There is a clear interest in the have-nots, or the proletariat and how they want to take the place of those who control them.

While there is a much keener sense of humour and pathos to ‘Parasite’, ‘Snowpiercer’ is rather less sentimental and has far fewer comic touches – though it is not devoid of comedy completely. In many ways it is darker and bleaker but worth your time as you are in the hands of a master (of cinema).

The only questions permitted from the floor were those from BFI Future Film – aspiring filmmakers who had won a competition and were allowed to ask director Bong a question.

One asked for advice as a young filmmaker.

He also generated huge laughs and cheering when he admitted to telling Weinstein a porky.

As well as wanting to cut 25 minutes from the film, Weinstein was adamant that a scene with a fish (a large looking carp) should go.

“I told him we had to keep it – my father was a fisherman. And because it was about family, he left it in. My father’s a graphic designer – it was a f*****g lie,” said a chortling Bong, displaying his trademark charm and affable wit.

‘Snowpiercer’ did not get a cinema release in the UK but can be seen on streaming. But you will miss its exuberance and the force of Bong’s cinematic imagination, if you see it on a small screen. At times, it feels like you are literally walking through director Bong’s wonderous imagination.

Swinton introduced the film at the start of the evening – and spoke warmly about the BFI Southbank and how thrilling it was for her to present ‘Snowpiercer’ there and welcome director Bong in person to the theatre for the post-screening discussion.

*Swinton was presented with a BFI Fellowship award by director Wes Anderson at the Rosewood Hotel in London last Monday (March 2). It was in recognition of her career as an actor of distinction and talent. Earlier in the evening, Anderson and her had been in conversation at the BFI Southbank. Swinton has appeared in Anderson’s ‘The Grand Budapest Hotel’ (2014) and can be seen in the American director’s forthcoming ‘The French Dispatch’ (which incindentally is a film about a newspaper and journalists).