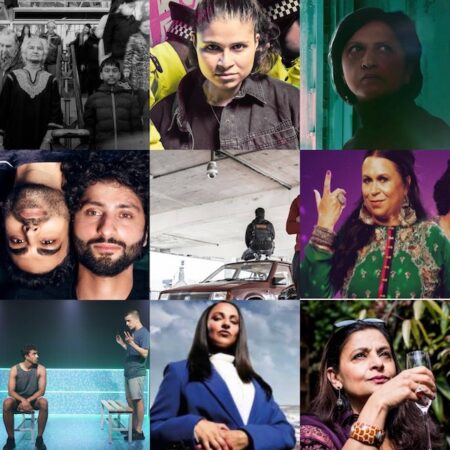 Breaking the taboo after 75 years – Silence

BASED on broadcaster Kavita Puri’s book ‘Partition Voices: Untold British Stories’, the Donmar Warehouse, in paternership with Tara Theatre, is showing this new adaptation ‘Silence’ from this month to mark 75 years of Indian independence. The production starts at the Donmar, in London’s West End, before transferring to Tara Theatre in South London, for the final segment.
Written by a quartet of top theatre writers – Sonali Bhattacharyya, Gurpreet Kaur Bhatti, Ishy Din, and Alexandra Wood – and directed by Tara’s artistic director Abdul Shayek, this is as hot a ticket as there has been in recent times. ‘Silence’ focuses on personal testimonies of people who lived through the 1947 Partition of India and Pakistan and the last days of the British Raj and will be presented via communal storytelling to mark this important anniversary. Puri spoke to www.asianculturevulture.com about updating her original story and the radio broadcast that accompanied hew new work – you can read about that here.
We also spoke to Bhattacharyya about ‘Two Billion Beats’ which was on earlier this year at the Orange Tree Theatre in Richmond, and reviewed her award-winning political drama, ‘Chasing Hares, which featured at the Young Vic last month. In recent times, acv has also covered the work of Bhatti (‘Dishoom’) and Din (‘Approaching Empty’).
The cast includes ‘Good Karma Hospital’s’ Nimmi Harasgama, who acv spoke to about her role in series 4 of the ITV show (see link below).

A RETELLING of Sophocles’ Greek tragedy ‘Antigone’ is to be staged at Regent’s Park Open Air Theatre from today (Saturday, September 3) to September 24, with actor Zainab Hasan in the lead role.
Just like the original tragedy, the play will follow a broken family and sees Antigone as the heroine trying to maintain familial bonds.
Written by British sensation Inua Ellams, the play includes actors Nadeem Islam, Munir Khairdin and Mervin Noronha. Ellams broke through with his seminal ‘Barber Shop Chronicles’ in 2017 and this promises to be equally revealing and relevant. Ellams on his own website said: “I hope my adaptation honours the original and speaks to contemporary England, and present day London.” How cannot it not? Not to be missed…essentially.

Flight of fancy as play transfers to space – The Cherry Orchard

CLASSIC Chekhov tale ‘The Cherry Orchard’ gets an Asian and futuristic makeover in the hands of writer Vinay Patel.
The young talent who so memorably brought Partition to the nation’s drawing rooms through his penning of ‘The Demons of Punjab’ episode of ‘Doctor Who’ in 2018, allows his imagination to take off (again).
Coming to the Yard Theatre from Monday (September 5) and through till October 22, this will have an all South Asian cast. Whoopee!
The play is set in outer space, where inhabitants of a spaceship are desperate to find a new home billions of miles from earth. But when they spot a planet, Captain Ramesh is adamant they shouldn’t leave.

Falling for the other – The P Word

LOVE in the face of racism is the subject of Waleed Akhtar’s play ‘The P Word’, which comes to The Bush’s Holloway Theatre from Friday (September 9) through till October 22.
Zafar (Esh Alladi) flees homophobic persecution in Pakistan by seeking asylum in the UK, whilst Bilal ‘Billy’ (Waleed Akhtar) lives in London and feels the weight of being brown in Britain, until their parallel lives collide in this dynamic drama directed by Anthony Simpson-Pike.

GREENWICH & DOCKLANDS INTERNATIONAL FESTIVAL is hosting Fuel Theatre’s ‘Peaceophobia’ from Wednesday (September 7) until Saturday (September 10) and it explores the rise of Islamophobia around the world – though the setting is a million miles from what you might expect.
Written verbatim by playwright Zia Ahmed, three friends Ali, Sohail and Casper try to take back control through the sub-culture of modified car clubs, which provide a rich vein of freedom of expression. If Islam is peace – how can you fear it, they ask. The young men vent freely over religion, their city and cars. Performed in a car park, the play aims to make use of non traditional spaces and empowers protagonists to say what they really feel. It is a sixty-minute show and involves music and cars.
The festival runs until September 11 and has free, theatre, art, dance and circus.

Reverberations from the pandemic – Final Farewell

MOVING and yet funny and poignant too, Tara Theatre presents its ‘Final Farewell’ also at Greenwich and Docklands Festival – and then it has a two-day run at the Queen’s Theatre in Hornchurch, Essex.
A tribute to those who passed during the pandemic, the first production is four audio stories told in the voice of the departed.
Crafted by writer-actor Sudha Bhuchar, these are accounts of real lives and constructed around the memories of those who have loved and lost. These particular stories are self-play audio as participants are guided by a map through the Isle of Dogs, before meeting at a final installation in Island Gardens. In Hornchurch, you will hear about Shahin, Baby Han, Ann and Oberon and walk a local route, which ends up back at the theatre.
ACV saw this in its original as another self-play audio walking tour around Tara Theatre’s home in Earlsfield, South London in July last year – and found it utterly life-affirming, uplifting and very memorable, despite its slightly grim undertones – don’t be deterred, it’s wonderful! (See the final brief in this story for more). (SR).

YOU wouldn’t think Bhangra and Shirley Bassey go together – but in Sonia’s Glitterball world they most certainly do.
Asian theatre outfit Rifco mounts writer-performer Yasmin Wilde’s musical comedy at its permanent home at Watford Palace Theatre initially before taking it on tour.
Sonia (Wilde) is in the midst of a mid-life crisis with her overbearing mother’s memory haunting her, when the half-brother she never knew arrives out of the blue and turns her world upside down – to say nothing about what that does to Sonia’s Bassey tribute act either.
The play is a musical extravaganza that mixes Bassey and Bhangra and a whole lot of laughs and sequins in between. Directed by Rifco’s founder and artistic director Pravesh Kumar, this can’t be anything other than a delicious hoot! You have been warned!

FRESH from its award-winning run at the Edinburgh Fringe comes Karim Khan’s tender and wonderous, ‘Brown Boys Swim’.
It transfers to the North Wall Arts Centre in Oxford on Thursday (September 22) to Saturday (September 24).
When two friends Mohsen and Kash are invited to the biggest party of their lives they realise they can’t swim, they throw themselves in the deep end to teach themselves – but obviously it’s about a lot more than simply that.
Set in Oxford itself, the play garnered rave reviews in Edinburgh and ended up winning the Popcorn Writing Award for Best New Play at the fringe this year.

ALSO riding its Edinburgh Fringe buzz is this political satire.
‘Exodus’, written by Uma Nada-Rajah, who is based in Scotland and of Sri Lankan heritage, the play is a political satire exploring systematic deception and an indifference to human suffering.
It follows Home Secretary Asiya Rao as she plans a publicity stunt that she hopes will put her in the running to be the next Prime Minister.
The play is now on tour until September 21 around various locations in Scotland.

Chewing the Millennial cud: a mother and her dual heritage sons – Evening Conversations

ONE-WOMAN SHOW ‘Evening Conversations’ starring the award-winning actor-writer Sudha Bhuchar is showing on Friday (September 30) at Watermans Arts Centre, followed by a Q&A.
Inspired by Bhuchar’s dual heritage sons who have grown up in Wimbledon, she investigates her own sense of home, which spans three continents, living in a household of two different faiths, as well as whether her sons view their ethnicity as a place of strength or an unwelcome inheritance. “You’re the one with the identity crises, not us!” they tell her as she invites her sons to “crack open a cold one” and shoot the breeze.
Directed by Kristine Landon-Smith, this is dedicated to the late Philip Osment (director, writer and dramaturg) who inspired Bhuchar and directed the original iteration of this show. This is an entertaining, witty, poignant, and wide-ranging show that reflects a new Britain emerging from those for whom identity is not – and can never be – a simple tick-box exercise. Bhuchar received the Tongues on Fire Flame Award 2018 for her contribution to Stage & Television, now runs theatre outfit, Bhuchar Boulevard and appears in Riz Ahmed’s Oscar-winning short, ‘The Long Goodbye’ and his co-written first feature film, ‘Mogul Mowgli’ (2018). (SR)

Privacy & Cookies: This site uses cookies. By continuing to use this website, you agree to their use.
To find out more, including how to control cookies, see here: Cookie Policy
← Darbar Music 2019 to end on high note with Pandit Budhaditya Mukherjee (sitar) and Pandit Shiv Kumar and son Rahul Sharma (santoor)
London Film Festival 2019: Greed – Red carpet glamour, Dinita Gohil, Steve Coogan, David Mitchell and others… (review of film as well) →