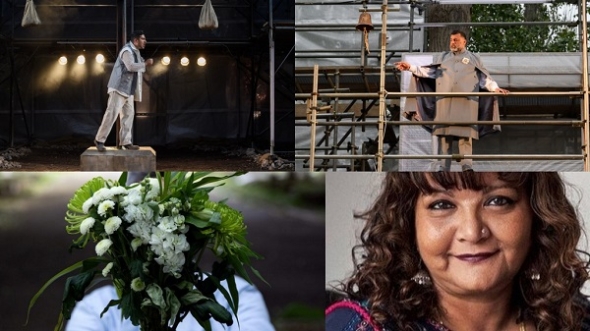 IT’S JUST been announced (July 19) that Tanika Gupta has been appointed an Artistic Associate at the Lyric Theatre in Hammersmith, London.
Gupta, one of Britain’s most successful playwrights, joins other Lyric Artistic Associates, Tinuke Craig, Philip McMahon and Nina Steiger. Gupta’s appointment comes as the theatre announced other leadership team appointments and now has an expanded leadership board.
Gupta will now team up more regularly with Rachel O’Riordan, artistic director and chief executive of the Lyric.
The pair put on the hugely popular and much acclaimed adaptation of Ibsen’s ‘Doll House’ in 2019, with Gupta transposing the setting to colonial Kolkata (Calcutta).
Gupta’s latest play, ‘The Overseas Student’ about a young Gandhi closes on Saturday, (July 24) and is part of the three-bill shorts, Out West series which has three plays all set in West London.
Esh Alladi plays an 18-yeard-old Gandhi who is rather tempted by the delights of London life: money, girls and a meat-rich diet.
The other two productions in the line up of Out West are ‘Blue Water and Cold and Fresh’ by Simon Stephens – a play about a white man who looks back at his life, as the city goes into lockdown and ‘Go Girl’ by Roy Williams, which explores the mother-daughter relationship between two black woman Londoners.
Tickets/Info (till July 24): https://lyric.co.uk/shows/out-west/#performance

FAST-PACED, modern and dynamic, Kimberley Sykes’ version of Shakespeare’s classic ‘Romeo and Juliet’ is well worth catching before the curtain falls for the last time at Regent’s Park Open Air Theatre in London on Saturday (July 24).
“Rather than being the full four-hour version, she (Sykes) has cut it down so that we get the substance of the story,” Irvine Iqbal told acv.
Priyank Morjaria, who plays Sampson, and is not long out of the Royal Central School of Speech and Drama, told acv: “This is my first Shakespeare and it’s fun, I am on first.”
The young actor was lined up to play the part last year, as was everyone else, but lockdown came and it only opened this June when the Government lifted restrictions on theatre re-openings.
Face masks were mandatory for the audience (before government regulations changed) – even though the stage is in the open air.
The return was remarkable for both these actors whose experience contrasts somewhat – Iqbal was a mainstay of Disney’s ‘Aladdin’ in 2019 and was also in the Royal Shakespeare Company’s (in Stratford-Upon-Avon) ‘The Boy in the Dress’ which ended just before the first lockdown.
Iqbal told acv: “It was great to be back on the stage and being among the first post-lockdown productions. We had been rehearsing with face masks and keeping social distances – except for Romeo and Juliet. It was wonderful to be in this modern production with a diverse cast.”
Morjaria: “The first two nights got rained off – so it was a bit peculiar and but on press night it was somewhat back to normal and remembering what it was like (before lockdown).”
Sykes transposes Shakespeare’s story of boy meets girl, and everything falls apart, because the families don’t want the two to be together with gusto.
It is set some time in the near future and the land has been ravaged by a brutal earthquake some 10 years earlier – there is a reference to this in the original.
The production is marvellous and makes full use of the space.
It’s a diverse cast and Juliet is played by Isabel Adomakoh Young, whose youthful energy and passion sometimes seems too much for the rather unremarkable boy next door type that is Joel McCormack as Romeo – still it hurtles along at a fair old pace and doesn’t disappoint.
If the weather is good, and you are in good company (partner or otherwise), it’s glorious.
Info/tickets: https://openairtheatre.com/production/romeo-juliet

The poetry of quiet existences – joy and celebration in South London

IF YOU ARE still a bit apprehensive about being in an enclosed space with strangers and want something a bit different and unusual but no less a theatre experience – acv recommends ‘Final Farewell’ which closes next Saturday (July 31).
It is essentially an audio play and a consists of a good walk around the park areas close to Tara Theatre in Earlsfield, South London.
There are six, intimate, affecting monologues (more or less) celebrating the lives of five people and one dog – all of whom died over the last year and lived locally.
Inevitably, covid rears its ugly head but don’t let any of this put you off – these are wonderful lives and well worth celebrating and learning more about.
Voiced by a distinguished diverse cast of actors, and written by Sudha Bhuchar, it’s a wonderful snapshot of South London lives and one hopes the stories, contained within, will live on perhaps in a more traditional stage format at some point.
Particularly moving and appealing was the story of Shahin, in ‘Buseh Gondeh’ – which in the language of Iran, Farsi, means ‘Big Kiss’.
This one-time photographer chronicled social developments in his homeland, but the government hit this poet, street philosopher, social activist and gay man rather hard.
His life in London was very rich in most ways, other than the material – he worked on the counter at the local Sainsbury’s and yet and yet… utterly beautiful, moving and uplifting.
People like Shahin make London what it is today.
You, sir, should not be forgotten or recounted as just a statistic and one of those near 130,000, who, officially, have died from that merciless, useless bug. No.
This is the poetry of quiet existences – if it can be termed like that.
Hats off to all – especially those who shared their stories making this production possible in the first place – from the darkest times, a slither of light opens into something wholly else.
Tickets/Info: https://taratheatre.com/whats-on/final-farewell/

Privacy & Cookies: This site uses cookies. By continuing to use this website, you agree to their use.
To find out more, including how to control cookies, see here: Cookie Policy
← ‘Cake’ film (review) – Caring for elderly parents, love across a religious divide and feudalism and modernity…
UK Asian Film Festival 2018: It’s a wrap as stars turn out for feel-good closing film ‘Boogie Man’ and festival awards presented… →