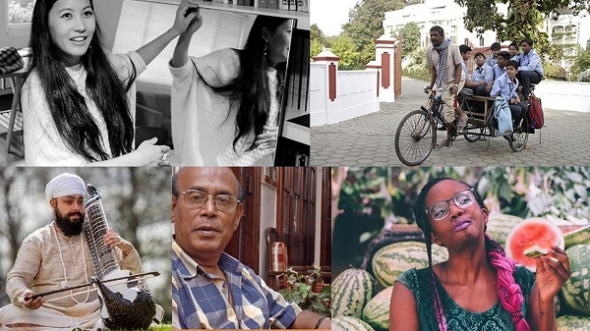 Eagle eyes on what’s out there online…

Visiting an art gallery still isn’t possible in many parts of the world and in a spirit of inquiry and curiosity, the Bagri Foundation is conducting a new digital series, known as ‘Open Up’ – and the charity is also marking 30 years of its own work.
On its Instagram feed, the charitable arts foundation is quizzing artists from around the globe. On Wednesday (June 24), it will be talking to Taiwanese-born Charwei Tsai (pictured by Roy Hoy), who now lives in Paris but continues to work in Taipei too.
Much of her work is centred around social, political and spiritual concerns and the idea of impermanence. She works across a number of different mediums – including photography, film and painting, as well as conceptual art. Inspired by Buddhist ideas and its practice in Tibet and Bhutan, she also has a lot to say about how humans shape and try to control Nature.
She often refers to these ideas in relation to Taiwan and is particularly interested in indigenous communities in the region. She also spent time in Nepal after the earthquake there in 2015. She is well-known also for her artist’s journal, ‘Lovely Daze’.
A graduate of the Rhode Island School of Design, she also trained at the L’Ecole Nationale Supérieure des Beaux-Arts in Paris and has had her work displayed all over the world.
The series ‘Open Up’ began with a tour of the studio of Shezad Dawood and some questions which went to the heart of the artist’s practice. The charity is marking 30 years with 30 artists interviews. You can see this here https://www.instagram.com/tv/CBQh8piFgTj/ Join Chelsea Pettitt, head of Arts at Bagri, quiz Charwei Tsai at 3pm (British Summer Time/10am New York, Eastern Daily Time/EDT/7.30pm Indian Summer Time/IST) on Bagri’s Instagram feed (Live) https://www.instagram.com/bagrifoundation/

Just being finalised is the full programme for the first ever digital version of the London Indian Film Festival (LIFF) which is set to be from Thursday, June 25 to Sunday, July 5.
We can, however, reveal exclusively (!) that the festival will open with a conversation with Ayushmann Khurrana next Thursday. And two films not screened in the UK will drop on Friday and Saturday next week – ‘Moothon’ and ‘Pareeksha’ (pictured with Adil Hussein as the cycle rickshaw) respectively. There will also be a post screening chat with star Adil Hussain as part of the Bagri Foundation LIFF ‘At Home’ series talks – ACV spoke to Hussain about the film at IFFI50/Film Bazaar last year.
There will be more on the festival next week including exciting announcements about other stars to be featured in LIFF’s ‘At Home’ talks. There’s also likely to be a screening, director talk and discussion with issues relating to Black Lives Matter. Stay tuned for news on on LIFF with www.asianculturevulture.com
The films available from tomorrow include ‘Hank and Asha’ which enjoyed its European premiere at LIFF in July 2014 and acv hosted a post screening Q&A and also a reception for the filmmakers and friends of acv – to mark the festival’s 5th birthday. Last year, we hosted a pre-screening reception for the film, ‘Sir’, to mark the festival’s 10th birthday.
One of the other films in this series is one of the best independent films to come out of India in recent times, ‘Ship of Theseus’ by Anand Gandhi. The director spoke to acv before the launch of the acv and was the subject of its first ever live story – see here.
The other films in the list are ‘Songs of Lahore’ (director Sharmeen Obaid-Chinoy ); ‘Runway’; ‘Flying with one wing’; ‘Monsoon’; ‘The Last Adieu’; ‘Elippathayam’ (‘Rat-Trap’) – winner of the Sutherland Trophy at the London Film Festival in 1982 and screened at LIFF in 2014 – read our interview with director, Adoor Gopalakrishnan. For details of the films dropping tomorrow, please see Liff’s social media channels, especially Instagram.

Staying on the film front, one part of the Cannes Film Festival has gone digital this year – the Marché Du Film (Film Market). It runs from June 18-22. The market is for film professionals and is mostly about buying, selling and the financing of films – all the business sides of the industry. We talk about the Cannes market in our own acv films, in Cannes Reflections 2020 (in this segment) and again in this. You can see the UK Film Cannes 2020 film schedule here.

Prolific creator Neil Gaiman (pictured) will be in conversation with Nilanjana S Roy about his book and TV series, ‘Good Omens’ on Saturday.
The Jaipur Literature Festival, which announced that it will host its London edition in partnership with the British Library from September 11-13 online, continues its ‘Brave New World’ series of talks with leading authors.
British Gaiman, who co-wrote the original novel of with Terry Pratchett 30 years ago, has just received a Nebula Award – which recognises works of science fiction – for his own TV adaptation which dropped on Amazon Prime last year and was also screened on BBC2 earlier this year. Starring Michael Sheen, it is about a battle fought between the forces of heaven and hell. Gaiman’s work includes novels, films, TV, comics, graphic novels, theatre and journalism. He was supposed to attend the Jaipur Literature Festival last year but had to drop out due to a scheduling clash.
The Brave New World talk with Gaiman on Saturday (June 20) starts at 2.30pm (BST) /9.30am EDT/7pm IST and you can view it on the festival’s Youtube channel.

Concluding on Saturday (June 20) is Refugee Week and there have been a number of events and initatives marking the week out. One of these is Migration Matters Festival which hosts a closing party and brings a curtain down on the week and what is World Refugee Day. The closing party will be headlined by Kampire (pictured) – one of East Africa’s most dynamic and well-known DJs.
Entitled, ‘Global Adventures in Bass’, it will include a feast of sound and images to get you up off your feet and shuffle and sing!
A host of online offerings about dance, art, film, music, spoken word, theatre, talk and workshops continue with Migration Matters Festival that began on Monday (June 15) and viewing details to what has already taken place is available from its website. One of the talks you can view is ‘Indian Migrant Women’s Contribution to the Suffragette Movement and World 2‘ hosted by Dr Stella Mascarenhas-Keyes. The policy advisor talks about the role of such women as Sophia Duleep Singh and Noor Inayat Khan and you can view it here. Refugee Week is a UK-wide festival celebrating the contributions, creativity and resilience of refugees and was founded in 1998.
The closing party starts at 9pm and goes onto 1am – you can view it here.

Launching an all-nighter this weekend is the South Asian Asian Arts uk group – featuring 10 musicians – playing what it describes as “eight hours of celestial music” to mark the summer solstice.
It’s the group’s 9th Summer Solstice Festival dedicated to Indian classical music. “We have an incredible line-up of instrumentalists, creating music that has no borders and reaches the mind, body and soul. The performances this year will include early instruments like the rabab from Afghanistan, the melodious santoor from the family of Hammer Dulcimer, the sitar made famous by Pandit Ravi Shankar, and more,” say the organisers.
Among the musicians playing are Kitha Balakrishnan, Adnan Khan & Zuheb Ahmed Khan, Kamaljeet Kaur, Ramana Balachandhran, Kirpal Singh Panesar (pictured), Qais Essar, Paaras Nath, Priyank & PT Ram Krishna.
The group is looking to raise £5,000 by the end of the concert in the morning – but it is free to view on the group’s Youtube Channel (see below). South Asian Arts UK – Summer Solstice Festival from Saturday (June 20) 9pm- Sunday (June 21) 5am. See here.

Talking about his poetry and his filmmaking is Buddhadeb Dasgupta (pictured), who is the subject of a conversation with The Gronthee, a literary platform, dedicated to experimental writing. Dasgupta’s films have screened as part of the London Film Festival and he is best known for his cinamatic imagination and lyricism. He also has a following as a poet and will be in conversation on Saturday (June 20). The Gronthee is also behind a discussion about contemporary reading and writing with Shree Ganguly, Miles Salter and Claire Potter, discussing their work on Monday (June 22). The platform, meaning bridge, was created almost 30 years ago and specialises in experimental writing and has an interest in non-conformist ideas and was initially founded by Shamim Shahan. These events are hosted by Saudha, Society of Poetry and Indian Music which has been conducting its own popular online concerts. On Sunday (June 21), this continues with ‘An Interpretation of Issac Levitan Through Indian Classical Music‘. Levitan (1860-1900) was a classical landscape painter of Russian heritage, whose work is most closely associated with the idea of mood landscapes.
For Gronthee talk times and further details see here https://www.facebook.com/events/365243311116299/ For Saudha’s next concert – https://facebook.com/events/s/interpreting-isaac-levitan-thr/263727431409190/?ti=cl

You can now watch ‘Druv’s Magical Land’ as part of Spark Arts for Children’s ‘Stories for Home Series’ These are tales created by storytellers in their own homes and were chosen by families based in Leicester.
“These stories will transport children into other dimensions and take them back in time and find new friendships in the strangest of places,” says the group.
Their latest tale by Santoshi Bobby Mann dropped yesterday (June 17) and these stories continue this month.
To watch see here – https://youtu.be/2MyulVhA0cE

POSTSCRIPT: July 1 – minor amendments were made to the entry about The Gronthee and Buddhadeb Dasgupta – the talk had to be res-scheduled and can be viewed – here.

Privacy & Cookies: This site uses cookies. By continuing to use this website, you agree to their use.
To find out more, including how to control cookies, see here: Cookie Policy
← ‘The 47th’ (review) – America on the brink in a new play that dissects divisions and has Donald Trump and Kamala Harris in combat…
Kiran Sachdev – Bollywood singer rising to the occasion in Women in the Arts Festival closing →