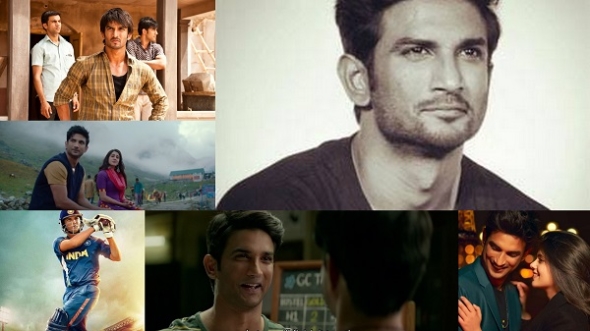 MUCH OF BOLLYWOOD remains in a state of shock and mourning following the suicide of up and coming star, Sushant Singh Rajput.

His most recent co-star Sanjana Sanghi who acted with him in his last film – ‘Dil Bechare’ left a heartfelt message about her co-star, which had been viewed almost a million times this afternoon. The film is a remake of the US-made hit film, ‘The fault in our stars’, about two young cancer sufferers experiencing first love.

This afternoon (June 15) Sushant Singh Rajput’s funeral took place in Mumbai and his immediate family flew in from Bihar and they were joined by stars, Shraddha Kapoor, Kriti Sanon, and Abhishek Kapoor.

A provisional post-mortem report released by the police stated that the death was asphyxia due to hanging and it is understood that the star was suffering from Depression, was on medication – and took his own life yesterday.

He appeared to call his sister in the morning at 9am (Indian Standard Time) but didn’t respond to his cook knocking on his bedroom door to his Bandra flat to find out about his lunch preferences sometime later.

Two flatmates and the cook reached out to his sister who lives in the Mumbai suburb of Goregaon and with the help of a key-cutter they got into the room before his sister made it to his residence. He was taken to nearby Cooper Hospital in Juhu and was pronounced dead at 4pm.

Police are continuing to investigate the circumstances around his demise – medical records showed he was undergoing psychiatric treatment. Rajput’s sister and manager confirmed this and said he had stopped taking medication for his illness a while back.

There has been speculation in some circles that there is more to his death and have called for the CBI – India’s national sleuths – to investigate, while a few have suggested that he was driven to suicide as a talented outsider, shunned by mainstream Bollywood and struggling with the pressures – in a country notorious for its general lack of empathy, and understanding and provision towards those suffering from mental illnesses and related issues. On a further sad note, his former manager Disha Salian had met with a similar fate a week earlier at her home in Malad and was also said to be suffering from Depression.

In his last film, ‘Chhichhore’, his character dispensed some sage advice on dealing with suicidal thoughts, stating that suicide was not a solution.

As the country tries to reaches for answers, there is an inspirational tale about the young man who came from nowhere to be one of Bollywood’s most impressive young talents.

Rajput was born to Krishna Kumar Singh and Usha Singh on January 21, 1986 in Bihar.

After schooling in Patna and Delhi, he studied mechanical engineering in Delhi and his path to a career in entertainment was laid by an early enthusiasm for dancing.

He started taking lessons from well-known choreographer Shiamak Davar. Dancing was also the reason why he backed out of the engineering course in the third year.

Rajput was also fascinated by stars, galaxies and constellations as a kid and even wanted to become an astronaut. His bio on Twitter and Instagram reads, ‘Photon in a double-slit’, a reference to Thomas Young’s double-slit experiment.

Dancing was Rajput’s stepping stone to the entertainment world. He performed at the 2006 Commonwealth Games in Australia along with Aishwarya Rai Bachchan and at the Filmfare Awards. He also learnt acting at the Barry John school.

He also joined Ashley Lobo’s dance classes and learned martial arts at Allan Amin’s studio. He then shot into limelight after featuring in an ad for Nestle Munch.

His first big break came in 2008, when a member of Balaji Telefilms saw him perform for Ekjute on stage. Impressed with his acting skills, Balaji offered him the role of ‘Preet Juneja’ in the show ‘Kis Desh Mein Hai Mera Dil’.

The following year, Rajput got to play ‘Manav Deshmukh’ in the daily soap ‘Pavitra Rishta’, which made him a household name.

This is when he started dating his co-star Ankita Lokhande. There was not stopping Rajput at this point – in 2010, he joined the Mast Kalandar Boys Team in the dance reality show ‘Zara Nachke Dikha 2’ followed by ‘Jhalak Dikhhla Jaa 4’, where he paired up with choreographer Shampa Sonthalia.

In 2011, he quit ‘Pavitra Rishta’ to pursue a filmmaking course abroad. Before moving abroad, he had auditioned for Abhishek Kapoor’s ‘Kai Po Che’.

As destiny would have it, he was selected to play the lead in the film, which set the ball rolling as far his breakthrough into films and Bollywood was concerned.

The same year he was offered ‘Shuddh Desi Romance’ but none of the big female names were willing to play his opposite – he didn’t have the requisite standing at that time, critics believed.

Parineeti Chopra and Vaani Kapoor were eventually chosen as his female leads.

In 2014, he played a small but significant role in ‘PK’, which turned out to be one of India’s highest grossing films.

In 2015, he displayed his acting prowess in Dibakar Banerjee’s ‘Detective Byomkesh Bakshy’, his only film that year.

Rajput got the much need boost to his career in the form of Neeraj Pandey’s biographical drama ‘MS Dhoni: The Untold Story’, where he played the much admired Indian cricketer and captain Mahendra Singh Dhoni.

That year too it was announced that Rajput would be part of the science-fiction space film, ‘Chanda Mama Door Ke’; he later withdrew from the film due to scheduling issues. This was also the year Rajput parted ways with Lokhande. He was understood to be dating Rhea Chakraborty at the time of his passing.

In 2017 and 2018, he co-starred with Kriti Sanon in ‘Raabta’ and with Sara Ali Khan and to popular acclaim in ‘Kedarnath’ respectively.

Last year, he featured in Abhishek Chaubey’s ‘Sonchiriya’ opposite Bhumi Pednekar, in Nitesh Tiwari’s ‘Chhichhore’ alongside Shraddha Kapoor and in Netflix’s ‘Drive’ with Jacqueline Fernandez. It was an action caper and was Johar’s first film that went straight to Netflix.

Rajput’s movie ‘Dil Bechara’, which was slated to release on May 8, this year, and has stalled because of the Covid-19 crisis.

Adapted from the 2014 film, it marks the debut of casting Mukesh Chhabra as a film director.

Earlier in the year, Rajput had posted on social media that he would feature in ‘Rifleman’, which is currently in a legal tangle over its rights.

Rajput’s loss will be felt keenly in Bollywood circles, where he was known to be a soft spoken outsider, who never took sides or was part of any camp.

Through his decade long foray in Bollywood, Rajput will live in people’s memories as a 34-year-old with roots in a small village, who climbed the ladder in filmdom without a helping hand from Bollywood’s mighty.

Privacy & Cookies: This site uses cookies. By continuing to use this website, you agree to their use.
To find out more, including how to control cookies, see here: Cookie Policy
← ‘White Riot’ by Rubika Shah wins Grierson – top documentary award at the the BFI London Film Festival 2019
Darbar Music 2019 to end on high note with Pandit Budhaditya Mukherjee (sitar) and Pandit Shiv Kumar and son Rahul Sharma (santoor) →