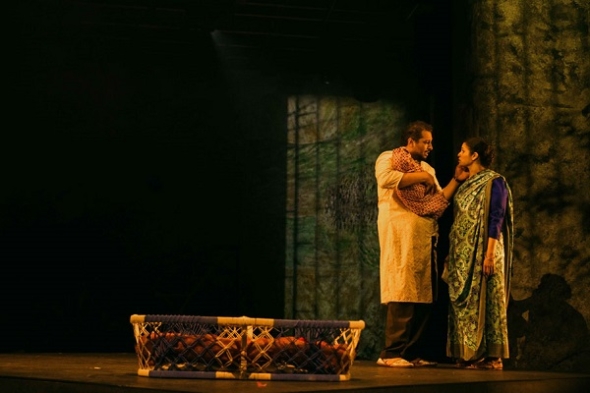 Loosely based on family experiences, this is a play that should resonate with anyone keen to see change within the world of work but doesn’t really know how to go about it…yet…

POLITICAL plays are hard sells at the best of times – but some playwrights will say that nearly all serious drama has a political dimension – subtle or not.

Directed by Milli Bhatia, this is a production with a surfeit of talent, both established and emerging.

Bhattacharyya is herself one of the most exciting writers to have emerged in recent times. Her ‘Two Billion Beats’ which played earlier this year at Orange Tree Theatre is also a fine piece of work and asks searching and vital questions about sibling relationships, intra-community engagement and bullying, to be brief.

Bhatia is another major developing talent whose direction of The Royal Court’s ‘Seven Methods of Killing Kylie Jenner’ by debutant Jasmine Lee-Jones, caused a huge splash for its exploration of Black identity, racism and the sometimes toxic nature of millennials and social media.

Essentially, ‘Chasing Hares’ looks backwards and forwards and starts with a gentle scene of domesticity, as a new young mother (Amba – Saroja Lily Ratnavel) cradles a young child and a proud grandfather looks on in modern contemporary Britain. She has work as a delivery person and isn’t altogether sure what her future holds because of it.

Then we are back in the 2000s in Kolkata and our grandfather is Prab (Irfan Shamji) – a young father trying to make a living as a factory manager.

With a loving and caring wife, Kajol (Zainab Hasan), they are on their way up in the world: Prab has been promoted and has more money but there is a distinct sense of unease.

His place of employment has been suffering and his employers have been taking shortcuts and have started to employ boys as young as 14 – there are suggestions that some are even younger.
Prab has a conscience and increasingly finds himself at odds with his rich and unscrupulous bosses.

The precariousness of existence for most of his contemporaries and the use of child labour weighs heavily on him and he pours his frustration out in the traditional form of drama – known in Bengali society as a ‘Jatra’ – a form of street and village theatre that began with tales of daring-do from ‘The Mahabharata’ and ‘The Ramayana’.

This is basically the set-up and the first half of the play Is very much rooted in Prab and Kajol’s management of their situation.

They get by – but know others are struggling and finding it increasingly difficult to even put food on the table.

Prab’s writing of a play and his involvement in the local Jatra group presents another dimension to ‘Chasing Hares’ and there are characters there – who also have less than noble aspirations, shall we say.

This section is a little dense and isn’t as focused as it might be on the huge pressures Prab is experiencing. In some ways, there is too much going on and Prab seems somwhat conflicted – though that may be true to his character.

In the second half, this all becomes far more obvious and a particular incident shows that he can no longer continue to exist in the way that he has been – ie, crudely turning a blind eye.

Everything explodes and Prab and Kajol’s lives are forever changed – just how would be to tell too much and goes to the very heart of this drama.

Bhattacharyya’s undoubted skill is to weave a family story that connects the contemporary to the past, illustrating in a sense, how little has changed and asks how long can we continue like this without accepting that this is not doing anyone – except the rich and already comfortable – much good.

It’s great to see a play with a political purpose and energy – and this has much to recommend it – but don’t get worn down or lost by the middle section which is a tad stodgy – stay with it, and you will be rewarded.

Pictures: Courtesy of the Young Vic

Privacy & Cookies: This site uses cookies. By continuing to use this website, you agree to their use.
To find out more, including how to control cookies, see here: Cookie Policy
← ‘Eaten by Lions’ – Big heart, laughs and some true English eccentrics… 😉 (London Indian Film Festival)
Suriya and other South Indian film stars in London for puja and launch of new blockbuster film →