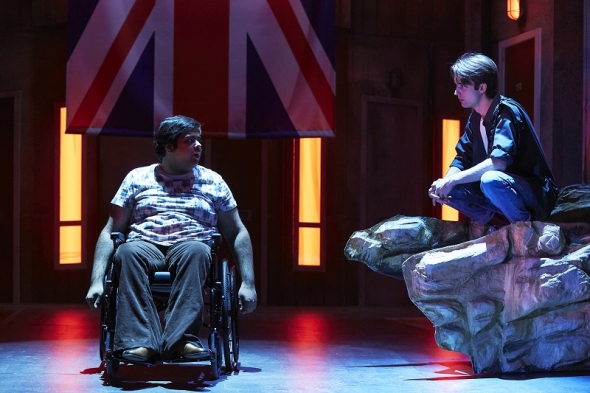 COMEDY and laughter are not your first thoughts when you hear Gurpreet Kaur Bhatti has a new play out.

“I’d describe it as a funny, theatrical piece of work that hopefully packs an emotional punch,” she said.

‘Dishoom!’ is a sort of Hindi/Bollywood term like the word, ‘POW’ you might see in English language comics.

There is an element of fun and irreverence and the music and accompanying dance also form a part of the narration.

“There is a lot of movement and dance. The title refers to the masala movies of the 1970s but it’s also about power and one of the important themes of the show is empowerment,” Bhatti stated.

Set in the summer of 1978, ‘Dishoom!’ centres around an Asian family caught up in the tumult of the times and a certain Bollywood classic – ‘Sholay’.

‘Simon’ (Bilal Khan) should be looking forward to the summer holidays but his sister is unimpressed by his general outlook, and his Dad is hiding from family issues in the pub and the Far Right Fascist National Front are on the streets and demanding non whites leave Britain. Simon is confined to a wheelchair and isn’t a confident soul.

When a cousin ‘Baljit’ (Gurkiran Kaur) from India comes to stay with Simon and his family, and introduces him to the iconic film which stars Indian cinema legend, Amitabh Bachchan, there is a change in mood.

Simon and Baljit stand tall and proud – like Bachchan’s character, Jai, in the film and friend, Veeru (Dharmendra), who fight injustice, even though they are both petty criminals themselves – and face up to the racism of the times with a new boldness and courage.

Bhatti said ‘Sholay’ and the music from the film made a lasting impression on her and many of those around her and there are action and fantasy sequences in the play.

“‘Sholay’ is the most iconic film of Bollywood. It is a film that inspired many of my generation and generations to come at the time.

“I remember it very well! As well as the songs and buddy story it’s also about a village rising up to defend itself. That sense of defiance was really what we wanted to encapsulate,” she disclosed in an email exchange.

The inspiration for writing this play came from old acting colleague Pravesh Kumar, who is now the artistic director of theatre company, Rifco and also directs ‘Dishoom’.

Bhatti was part of a theatre group that included the younger Kumar.

Gurkiran Kaur and Omar IBrahim in one of the fantasy sequences in Dishoom! Photo: Richard Lakos

“It’s great to be working together after many years.

“Pravesh approached me with the idea. 1978 was a crucial time in British history – the Far Right was rising, Margaret Thatcher was capitalising on anti-immigrant feeling and opportunities for young people were scarce. We felt these elements resonated heavily today,” Bhatti revealed.

Both Bachchan and Dharmendra in ‘Sholay’ are figures of masculinity and gave birth to the idea of the ‘Angry Young Man’ which permeated Indian cinema for a time and helped to make Bachchan a standout figure among his peers.

Bhatti often writes strong female characters who defy convention and tradition and create their own path and Baljit is very much in that mould.

“Baljit wants to continue her studies rather than be married off. She’s an example of a girl who recognises she has her own choices and finds the courage to choose her own destiny,” declared Bhatti.

So, while on the surface there are laughs and japes, underneath Bhatti is asking more difficult questions about the world and how it is currently ordered.

“Getting the laughs is great but I am hoping it says something about choice and power and hypocrisy.

“I hope it’s an entertaining night but a thought-provoking one also. In my view, theatre should be provocative.”