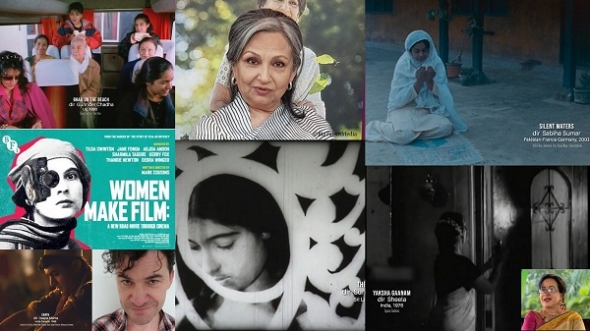 BOLLYWOOD icon Sharmila Tagore is just one of seven women who narrate the contribution of women behind the camera in a remarkable documentary.

Assembled by filmmaker Mark Cousins, the epic 14-hour work has just dropped in its entire five parts on the BFI Player this week (June 15) and is available from several other platforms too (see below). There is also a special British Film Institute (BFI) 4 disc Blu-ray box set with special features to buy (see below for more detail).

Tagore joins Tilda Swinton, Jane Fonda, Adjoa Andoh, Kerry Fox, Thandie Newton and Debra Winger as one of the commentary voices you can hear in the film which is, in essence, a very thematic study of women behind the camera.

The film is split into subject themes such as bodies, politics, religion, sex, framing, gear change and comedy, among others – and there 42 of these subjects in all.

Divided into bite-size chunks by subject and woven together as a road movie with the camera moving along different roads and landscapes – some of the narrators can be seen either driving themselves or being driven. There are also excerpts from the films of black women, including Mati Diop, ‘A Thousand Suns’ (2013), and Ava DuVernay, ‘Selma’, (2014), and several Iranians. And British actors Thandie Newton and Adjoa Andoh also narrate.

Tagore, who lives in Delhi, did not respond to our inquiries but Cousins did tell us why he wanted her to be part of this project.

A former film journalist and critic and now filmmaker and film programmer, he made the equally ambitious ‘The History of Film’ (900 minutes of it) in 2011.

That project clearly gave him a template of how to put ‘WMF’ together and it was also how he came to work with Tagore who was first discovered by India’s best-known director in the west, Satyajit Ray and cast in his ‘Apur Sansar’ (1959).

She starred in several of Ray’s films and then went onto become one of India’s biggest film stars and married the equally glamourous Mansoor Ali Khan Pataudi, descended from Indian royalty and one-time captain of the Indian cricket team. Her husband, known more commonly as ‘Tiger Pataudi’ died in 2011. She is the mother too of Bollywood hunk Saif Ali Khan and writer and indie actor Soha Ali Khan.

Cousins, who grew up in Northern Ireland, has a long and personal history, both with Indian cinema and the country itself – he travelled in a campervan from his home in Scotland to India in 2001 – making the final leg on a ship from Iran to Mumbai – and has long championed Indian filmmakers such as Ray (1921-1992), Ritwik Ghatak (1925-1976), and Guru Dutt (1925-1964) – and also contemporary documentary maker, Anand Patwardhan.

“I wanted Sharmila in ‘WMF’ because she is one of the greats. She has real creative credibility.

“I worked with Sharmila Tagore before. She’s in ‘The Story of Film’. For that, we filmed in her house in Delhi and I got to know her and her husband,” he told www.asianculturevulture.com.

Cousins has not chosen the obvious – and while there are excerpts from filmmakers you would expect – Agnes Varda, Jane Campion, Kathryn Bigelow, Catherine Breillat and Sofia Coppola, to name just a few – there are lesser known directors whose countries are not normally represented on the filmmaking global map – there is a film from Myanmar (Burma). ‘Now I am Thirteen’ is a documentary film by Shin Daewe and appears in The Meaning of Life section.

“For a long time now, I’ve been looking at film as a global artform, and calling out those who are eurocentric or anglo-centric.

“Part of me thinks that you need to make a lot of effort not to see that cinema is global!

“There’s a wilful blindness in the western world.

“In Europe there’s a bit of a neo-colonial superiority complex. Europe assumes that since it ruled a lot of the world and invented cinema, that it must be the centre of filmic creativity. It isn’t,” he said passionately in an email exchange for acv.

He is particularly proud of identifying a film made by Sheela – who was best known for appearing on the other side of the camera – she was a huge star of Malayalam cinema and has a huge range of credits from 1962 and continues to act to this day – as a 75-year-old.

Sheela’s film ‘Yaksha Gaanam’ (also written, ‘Yakshagaanam’), appears in the section on Meet Cute in ‘WMF’. It is the story of a man who falls in love with an ethereal being who doesn’t really comprehend human love.

“We were pleased to have Sheela in there – not many people knew that she directed!”

Also featured is Sumitra Peries – Sri Lankan and the wife of the better-known director Lester.

Cousins admits his research method wasn’t so sophisticated in this instance.

“I had seen her husband Lester’s films, but I googled “great Sri lankan female filmmakers”, and came across her film ‘The Girls’ (1978), which I thought was a masterpiece.

“Stylistically bold, tonally distinct, thematically relevant. I did online research on her, read a lot and came to realise what a remarkable filmmaker she is.

Cousins was ably assisted on the South Asian front by Sonali Bhattacharaya, who also worked on ‘The History of Film’. She also watched some of the Hungarian films that appear in ‘WMF’.

Cousins admires veteran Indian documentary filmmaker Anand Patwardhan and has two tattoos dedicated to filmmakers Ray and Dutt – in another interview, he recounted how as a journalist, Amitabh Bachchan gave him more time when he told the Indian icon his favourite Indian film director was Dutt.

The film, ‘WMF’ enjoyed a world premiere at the Toronto International Film Festival last year and was set to release at the BFI Southbank in May (along with screenings of some of the filmmakers featured) but now is likely to be screened there later this year – so you can watch it on the big screen!

There’s little doubt that ‘WMF’ is a labour of love and highlights the brilliance of women directors – many of whom have been overlooked, neglected or not considered worthy (enough).

“I try to work more innovatively and focus on a filmmaker’s work, their visual thinking. This is the best way to respect them,” concluded Cousins.

Also available on Curzon Home Cinema, i-Tunes, Amazon Prime (download to own and on demand)

Blue-ray £49.99 features ‘The Making of…’, a new video essay by Mark Cousins in which he discusses his influences, motivations and methodology of WMF, and a Q&A with documentary maker Barbara Kopple (18 mins) that took place at TIFF in September 2019. The first pressing will contain an illustrated booklet with an introduction by Ceri Beauchamp, new writing by Mark Cousins, assorted biographies and full credits. Purchase here https://shop.bfi.org.uk/

Cousins is also set to curate a dozen films on BFI player with a note on why each is an essential watch. https://player.bfi.org.uk/