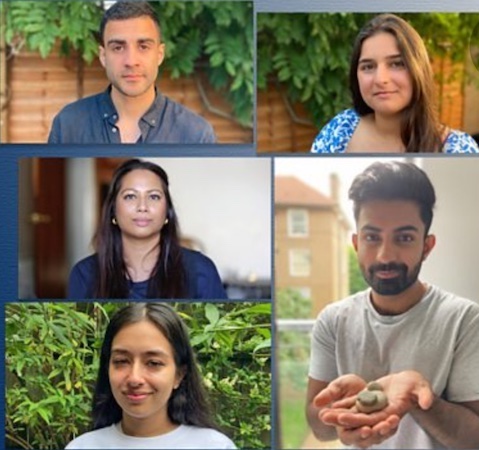 Her journalism has charted the history of South Asian communities in Britain in the post-war period to the near present, and now in the month of the year of anniversaries, she talks to acv about what people are telling her about their family histories...

TRAUMA is not something that can be passed down generation from generation – or can it?

Author and broadcaster Kavita Puri might well have the evidence to suggest that it does and if not trauma exactly, then the need to find out about one’s family history.

Her radio documentary, ‘Partition Voices‘ in 2019 and book of the same title broke new ground, when it got the survivors of those horrors now living in Britain to speak candidly about what they went through.

Now to mark the 75th anniversary of Partition, she has returned to the subject with both an updated version of her seminal work and a new radio documentary entitled, ‘Inheritors of Partition’ which will be broadcast on BBC Radio 4 on Monday (August 8). See listing below

There is also a new stage version of these stories coming to the Donmar Warehouse theatre in London in what in a joint production with Tara Theatre. Called ‘Silence’ it has a powerhouse of South Asian talent behind it and will open next month.

Puri, the journalist behind the critically-acclaimed ‘Three Pounds in My Pocket’ Radio 4 series, that is a social history of British South Asians in the post-war years, senses something has shifted in the culture to make everyone more receptive to these stories.

“I am looking at the inheritance of the third generation – both the trauma and nostalgia,” she told www.asianculturevulture.com just before the latest edition of ‘Partition Voices: Untold British Stories’ hit the shelves towards the end of the last month.

It is perhaps clearer now that Puri has uncovered a significant chapter in British post-war history and more people recognise her work is important, not just to those of South Asian origin, but to the wider population and is part of the fabric of what makes a modern UK.

‘Britain is trying to understand its past and that has become a big part of our national conversation – it’s becoming wider and more urgent,” Puri reflected.

Colonisation, Empire, Race and Identity have all become topics of everyday conversation in a way that they weren’t even five years ago.

“It feels like there has been a shift – the 70th anniversary was a really critical moment – the Partition generation began to break the silence, and family members started asking their families about what happened,” Puri told acv.

Her first book on this subject and the radio programme arguably opened up the topic.

“I didn’t know what to expect after it – I was touched by the response. These are British stories – and something that everyone should know about; it’s what their neighbours may have experienced and it’s been hidden for a long time.”

Families have different ways of coping with pain and trauma – many of a certain generation just wanted to forget the horrors which saw some 15 million people being displaced and an estimated million people losing their lives to mob violence following Partition. After 200 years or so of British rule, the land mass of India was carved up according to religious majorities in certain regions.

“Some people contacted me after ‘Partition Stories’ and wanted to share their story or ask more about the subject. For some it’s a very quiet thing within their own families; there are others who talked about it openly; and some for whom it remains very difficult.”

The new stories in the latest book really pick up on a third generation that are further removed from the original trauma.

“They are talking about their grandparents, both alive or passed. One is about a man going to Pakistan to see his grandfather’s ancestral home; the other is about a British Pakistani who does a DNA test and makes a surprising discovery. She hadn’t come across the word Partition before the 70th anniversary.

“The third story is one of dual heritages – it’s a beautiful love story and a lot more complicated than meets the eye. It involves a couple with both Hindu and Muslim ancestry. It’s a love story across borders.”

It’s an intriguing and fascinating mix and given added impetus by the latest anniversary.

“It really matters to them – they want to know more, they were never told about it at school and they are educating themselves and playing detectives with their own family histories and trying to work out what and who they are. One of the contributors says: ‘I am not going to tell the story I was told to tell my children. I will tell their long history’. These are quite stark stories and just a few of many.”

Radio Times described Puri “as one of the foremost chroniclers of the South Asian diaspora”. Her original three part series, ‘Partition Voices‘ for BBC Radio 4 won the the Royal Historical Society’s Radio and Podcast Award and its overall Public History Prize. Kavita works as an executive producer in BBC TV Current Affairs where her projects have been recognised by the Royal Television Society and the Foreign Press Association. Prior to this, she worked at Newsnight. She graduated with a degree in law from Cambridge and moved into journalism and broadcast production.

More on the production of ‘Silence’ soon…