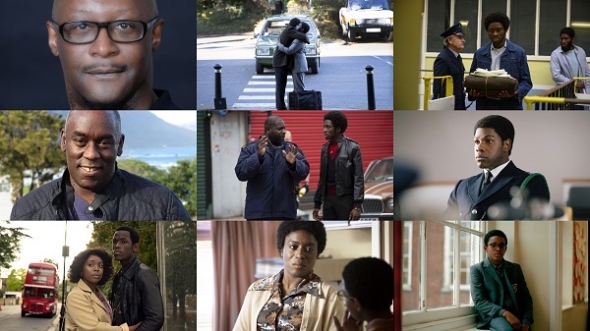 SMALL AXE has been nothing short of an absolute revelation as a BBC series screened on prime-time Sundays – and isn’t it something that the two best drama series of the year have come from the initiatives of two stupendously gifted black creatives.

Today (December 11) both series, with black protagonists at the heart of each, were revealed to have topped respective polls in influential film magazine, Sight & Sound.

Oscar winner Sir Steve McQueen and Courttia Newland’s ‘Lovers Rock’ was named film of the year in the poll of films of 2020, while Michaela Coel’s ‘I may destroy you’ also screened on the BBC earlier this year, topped the TV poll for the year.

And so, this Sunday (December 13) sees the curtain fall on the final of Sir Steve McQueen’s five films in the Small Axe series with the film, ‘Education’.

McQueen told the magazine: “The response to ‘Lovers Rock’ has been quite overwhelming; I feel and hope it’s being embraced because it is a reflection of who we are as a people: joy, pain and love.”

Our reviews of the films we haven’t reviewed to date and links to the interviews and a series wrap and comment – below.

‘KINGSLEY’ (Kenyah Sandy) is a bright, star-gazing 12-year-old and a little bit cheeky and this is misconstrued as insolence and his boredom at school is not helped by teachers, who have no sympathy or understanding of his particular challenges.
While McQueen and Alastair Siddons, the co-writers to this particular screenplay, do not give any obvious nods to dyslexia and/or autism, it is clear Kingsley’s needs can’t be accommodated by a 1970s London comprehensive.
His head teacher decides to send him to a ‘special school’ – that phrase understood, as it is through a modern lens – is thoroughly filleted in this very tight 60-minute drama.
It is not special in any way – and most children are simply dumped there to be forgotten and quite possibly institutionalised for the rest of their lives.

How Kinglsey is rescued from this nightmarish scenario lies at the very heart of all the action.
In a slight change of perspective from previous Small Axe episodes, we see Kingsley’s predicament very sharply through his mother’s eyes (Sharlene Whyte) and it is the women in this episode who ring the important and positive changes. Kingsley’s sister – Stephanie (Tamara Lawrence) is also a strong and benign force as she matures.
Whyte’s character, weighed down by two jobs and one as a nurse, takes solace in the idea that her son is supposedly being helped by this special school – but later comes to realise his situation is serious and hopeless and with the help of two very smart and focused black educationalists – Lydia Thomas (Josette Simon) and Hazel (Naomi Ackie), Kingsley’s plight is addressed.
Like all the Small Axe films, it’s intense, powerful and emotional – and yes, unmissable!
ACV rating: ****½ (out of five)

FIRST screened on the BBC last week and like all the Small Axe series, available too on Amazon Prime, in some countries, this film is essentially an underdog story of triumph and hope.
Alex Wheatle is today a best selling and award-winning novelist, but started life in care, was bullied and humiliated there and then found himself trying to establish himself in Brixton, an inner south London suburb hit hard by both social deprivation and police brutality in the 1980s. That Brixton erupted in riots in 1981 is subtly charted in a film with a screenplay by McQueen and Siddons – and Wheatle himself was a writing consultant to the whole series. (Read our interview with Wheatle).

The shadow of the horrific Newham house party fire, in the early part of 1981, and which claimed 13 young black lives, rightly haunts sections of this film and to this day no one has been charged and investigations never went anywhere.
A spell in prison and a meeting there with a Rastafarian, ‘Simeon’ (Robbie Gee), allows the young Wheatle (Sheyi Cole) to begin to find himself and right the wrongs so viciously inflicted on him throughout his early, difficult life.
Wheatle told acv he remained in touch with Simeon until his death four years ago in the Caribbean and that every book published by Wheatle (14 listed on his website) was the subject of at least a 10-page critical analysis by his former cellmate.
The Guardian Children’s Literature prize winner of 2016 for ‘Crongton Knights’ also told us that reuniting with his family in the US and Jamaica helped him to overcome the trauma he had endured as a boy and teenager. He had been taken into care as a baby as the film depicts.
Today, Wheatle is a father of three and much in demand, after this TV drama biopic about his early life.
It’s another salutary reminder that for every Alex Wheatle, there are hundreds, possibly even thousands, who fell by the wayside because we as a society failed them.
ACV star rating: ***** (five out of five)

IT IS SHOCKING to think this story almost went untold.
‘Star Wars’ icon John Boyega plays Leroy Logan – Britain’s first black Metropolitan Police officer who joins the force in the 1970s and is very nearly hounded out of it – by racism.
That Logan’s father (played by Steve Toussaint) was stitched up by the same force some years earlier only adds to the complexity and rich interplay of motivations superbly delineated in this affecting dramatisation of a real life.
The father and son dynamic is key and powerful – Ken Logan displays a dignity and poise that gives Leroy a moral centre and deep courage.
Rich in period detail and beautifully shot and acted, it’s another important slice of British life served up by an amazing ensemble production team.
ACV rating: ***** (five out of five)

You will find reviews of ‘Mangrove’ and ‘Lovers Rock’ which both played at the London Film Festival (and were originally selected for the Cannes Film Festival as well).

Editor’s note: McQueen has redefined a sense of British history – giving us all a glimpse into a time some would quietly and conveniently consign to a different age. But if we have learnt anything, anything at all, in the wake of George Floyd’s grisly and ugly death and the Black Lives Matter agenda that followed – it is that as a society, we keep missing black people – no longer, no more – no excuses. And where one minority community has endured systematic abuse and discrimination, another has been, though perhaps not on anywhere the same scale – and we must call out and fight the common enemy – and together, for each other and everyone.
Thank you, Steve McQueen and all involved in Small Axe.

Privacy & Cookies: This site uses cookies. By continuing to use this website, you agree to their use.
To find out more, including how to control cookies, see here: Cookie Policy
← Lola Arias interview London Film Festival 2018 – ‘Theatre of War’ about the Falklands conflict (and a Gurkha story)
Namdev Bhau In Search of Silence – director Dar Gai talks about her film about a Mumbai driver escaping noise for the Himalayas (London Film Festival) Click below for video →