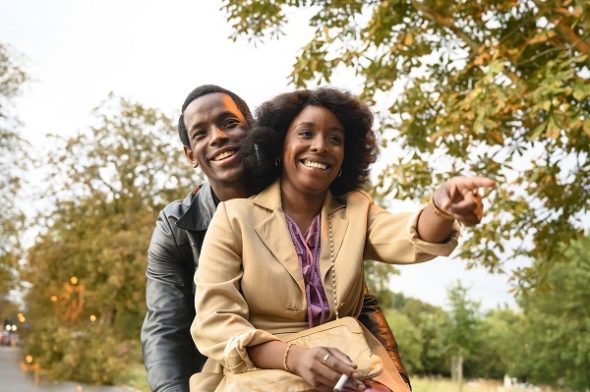 Oscar winning director Steve McQueen goes back to the 1980s for this charming romantic production which hits the bullseye!

AN INTRIGUING title, ‘Lovers Rock’ (signifying the musical style) and one that conjured up the heady days of my youth – though I was more partial to Dub and Roots Reggae.

Director Steve McQueen’s celebratory slice of life – for his forthcoming BBC One ‘Small Axe’ series (starts November 15*) and screened at the London Film Festival (October 7-18) as one of its last films – is hugely enjoyable, observational and insightful.

Set during an evening at a house party in Ladbroke Grove, west London, in 1980, it begins with a sofa being moved out into the garden, the sound system being set up, while women in the kitchen make food and sing along to ‘Silly Games’, a song by Janet Kay – which features again later in the evening.

Meanwhile a young woman, ‘Martha’ (Amarah-Jae St Aubyn) climbs down the drainpipe, shoes in hand, having sneaked out of her house to enjoy an evening with a friend.

She and her companion, ‘Patty’ (Shaniqua Okwok) have come to the house party.

Written by Courttia Newland, and captured by cinematographer Shabier Kirchner, ‘Lovers Rock’ shows everything during the course of this particular evening – from queuing at the door to pay to get inside, to dancing, to the music and being decked out in the clothes of the 1980s, to queuing for the loo – every detail is here.

The atmosphere is beautiful, authentic and attractive and the mood is amply set by Mica Levi’s music compositions.

Martha meets ‘Franklyn’ (Michael Ward) and the two begin to dance and chat on the sofa outside.

Her friend ‘Patty’ is introduced to his friend Reggie (Francis Lovehall) but nothing sparks.

Meanwhile, ‘Bammy’ (Daniel Francis-Swaby) is a menacing presence dressed sharp, chatting up women and turning nasty when refused and there is a sexual assault – and this just adds to the heightened drama depicted on the one night.

The outside world is shut out for the most part – but every so often, you hear a police siren and so you know that Babylon is not so far away and this is the night to party and have the time of your life.

At one point the DJ plays, ‘Kung Fu Fighting’ by Carl Douglas and the whole room goes into a synchronised Kung Fu dance.

The choreography is superb and the sound works incredibly well and the whole quality of this film puts you right into this house and you are intimately aware of its ‘bacchanal’ leanings.

Franklyn and Martha get together and he walks her home via the garage where he works and his boss tells him “Franklyn you don’t need to bring your Doris here,” he says.

It’s interesting to see how she takes note of the number of the local phone box and tells him that she will call him at precisely five o clock and he should be at the phone box, (can’t imagine that today!)

Then it ends with her climbing back up to her room and pretending to be asleep as her mum knocks on the door and tells her to get up for the new day.

It’s a real hedonistic, immersive experience watching this film and you want to be on the dance floor inhaling the wacky baccy and drinking your rum n coke!

*Director Steve McQueen Small Axe series broadcasts on BBC One (in the UK only) from November 15 with ‘Mangrove’ which opened the London Film Festival. Lovers Rock goes out the following Sunday on November 22.

Both ‘Mangrove’ and ‘Lovers Rock’ were selected toscreen as world premieres at the Cannes Film Festival this year, before the festival was cancelled due to the global coronavirus pandemic.
Look out for our interviews about Small Axe coming to http://www.asianculturevulture.com soon!