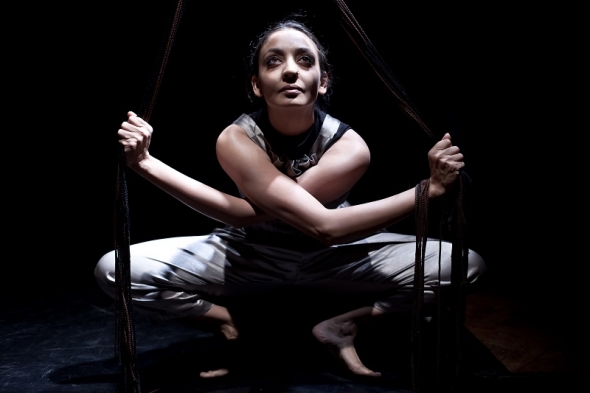 Radically different from what you might know of bharatanatyam, this award-winning work is a major production and a starting off point for discussions about politics, colonial history and telling it like it is…

IT’S HARD to think of Bharatanatyam “getting in your face” – but this is how dancer Seeta Patel (pictured above) described her forthcoming, ‘Not Today’s Yesterday’ to acv.

A solo work developed with Australian choreographer and dancer Lina Limosani (pictured below), it’s probably fair to say this is not Bharatanatyam as you know it.

Part of the inspiration for the work initially came from Patel’s research into the origins of bharatanatyam itself and discovering it had been whitewashed and its origins as an ancient dance form were not as clear-cut as is commonly presented.

“It made me think what other histories had been whitewashed,” she told acv.

‘Not Today’s Yesterday’ opens tomorrow (October 3) in London, at The Place, a premiere dance venue that often hosts new and original work and the production then goes on a short nationwide UK tour this month (see dates and venues below).

There will also be post show discussions with Patel and leading lights of the stage, dance, and academia at The Place. (See below for more).

Patel told www.asianculturevulture.com: “ ‘Not Today’s Yesterday’ is about other stories that we’ve been told not being true or not being entirely truthful, so it is not the history of yesterday as we know it today.”

It has a strong political dimension and centres around an understanding of the colonial enterprise as it might have been originally constituted.

Patel understandably didn’t want to be drawn into specifics or a clear narrative – though unlike some Western contemporary dance, this does have a story and a narrative and it isn’t classical Bharatanatyam by anyone’s definition of it.

For example, you would never hear a traditional Bharatanatyam performer speak.

“It’s not geographically located or connected to a group or groups of people – it’s a creative metaphor and an allegory for colonisation,” elaborated Patel.

She stressed the visual nature of the work too – and the set design also plays an important part in conveying mood and meaning.

“There are two different elements of the set – which have two very different effects and feelings,” she further articulated. “It’s also like a fairy tale.”

“You’ve got these really different textures and elements and the story is told through these elements.”

Patel said the initial inspiration for the piece, which has been in development for some years and performed in more experimental forms before in the UK, came from a one-woman show she saw at the Edinburgh Fringe Festival in 2015 called ‘The Soaking of Vera Shrimp’.

Written and performed by Alison Carr, it is primarily about a teenager’s response to grief.

“I was so moved by it and what she did in that show in a small, intimate space. I was interested in seeing if I could hold a story of some sort that wasn’t Bharatanatyam like my own solo work, but have speaking in it.”

So, while she leans on her training and style influenced heavily by her own bharatanatyam repertoire, she has opened up the form to practices and disciplines more to be found in theatre – such as soundscapes, narration and voiceover.

Her desire to do something different with bharatanatyam also came from a deeper understanding of the form itself and its origins. It was banned by the British under colonial rule but enjoyed a revival at the beginning of the last century and was an act of defiance in some circles.

Patel said the story has depth and darkness – Limosani’s influence as a choreographer is clear.

“She likes delving into the dark, macabre side of things, so between us, we came upon the idea of working on it as a fairy tale, and fairy tales are often double-edged,” explained Patel.

She argues the history of bharatanatyam has a more radical edge which appears to have become lost in time.

“It’s been repackaged to make it this exotic, thousands of years old temple dance form and it never felt right and I never felt comfortable when people referred to me as someone doing that kind of thing.”

It also links to her and Limosani’s themes of ‘whitewashed’ history and clearly informs ‘Not Today’s Yesterday’.

The 50-minute performance enjoyed a run at the Adelaide Fringe Festival earlier this year and was garlanded with two awards – both the Dance Award at the fringe and a Peace Foundation accolade – and was greeted with huge acclaim.

“People were a bit nervous. Australia has a difficult relationship with its indigenous communities and we were not sure how people were going to react.

“It really gets in your face by the end of the show, but people really took to it,” Patel revealed.

*Among those speaking at the post show discussions are Tanika Gupta (chair), one of Britain’s top playwrights and recently awarded the prestigious James Tait Black prize for her pre-Independence drama, ‘Lions and Tigers’. (See link about that production below); She is joined by Gurminder K Bhamra, professor of postcolonial and decolonial studies in the school of global studies at the University of Sussex; Alice A Procter, an Australian art historian and museum educator.
On the second evening, Kenneth Tharp OBE, one of Britain’s best-known figures in the dance world and former chief executive of The Place between 2007-2016 chairs a panel with Inua Ellams, an exciting and still emerging playwright and spoken word artist, whose first play, ‘The Barber Shop’ chronicles played to packed houses at the National Theatre last year; and Tobi Kyeremateng, a theatre festival and live performance producer, who is much involved in education and theatre and getting more young black people into theatre through an organisation called Black Ticket Project.

‘Sigma’ – Bharatanatyam and juggling meet and have a ball…