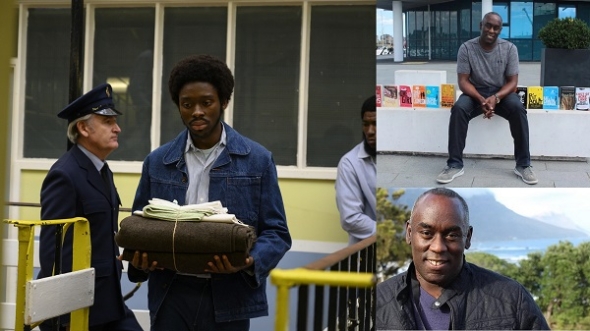 IN THESE difficult times, it’s important to remind ourselves about the resilience and strength we can show in the face of adversity and enormous challenges.

Later today, (Sunday, December 6) the fourth of the five special films Sir Steve McQueen has made for the BBC, all under the banner of Small Axe, will be broadcast on prime time national TV.

This episode is entitled, ‘Alex Wheatle’ and is all about the early life of a black Londoner called Alex Wheatle.

It is a mini biopic – and about the way Wheatle pretty much rebuilt himself from orphan, care home cruelty, wayward teenager, who gets mixed up with the wrong crowd, and ends up in prison – to becoming an award-winning author, who has an MBE (2008), 14 novels to his name, was the winner of the Guardian’s Children’s Fiction Prize in 2016 for ‘Crongton Knights’ and is now also a lecturer in creative writing at Manchester Metropolitan University.

If you need inspiration and a reminder that some people have it much tougher and still live to flourish and prosper, watch ‘Alex Wheatle’ tonight and be in awe of McQueen, the writer himself and everyone who worked on this film – for it is an ultimately joyous ride and a tale of redemption, hope and discovery.

At the heart of it is a search for belonging, for family, for acceptance, and respect – and there is much drama along the way.

“I needed to ground myself and belong to something and that is what I think the drama about my life is about – wanting to belong and wanting to be part of something,” Wheatle told www.asianculturevulture.com. “Even now, on the odd or bad day, I carry this outsider feeling inside of me.”

He was first drafted into McQueen’s writers’ room alongside Courttia Newland – who co-wrote last week’s ‘Red, White and Blue’ and Alastair Siddons who with McQueen also penned ‘Mangrove’ which opened the series, and next week’s ‘Education’ which completes the Small Axe series – in 2015.

“I didn’t know Steve McQueen. My agent had sent his office some of my books and we knew about the project – charting West Indian life in Britain from about 1960s to the 1980s, it was right up my bag.”

Wheatle didn’t know Siddons, who had a background in documentary filmmaking, but he and Newland had known each other since around 1995. Both were emerging novelists at this time and had community recognition, excavating similar themes.

Wheatle has been a general writing consultant to the whole Small Axe series and there was no initial plan to write about his life.

“Mid-way through the creative process talking about themes and ideas, Steve said he wanted to explore the idea of a young black male who had been through institutions. Alastair Siddons pointed at me and said, ‘your story is perfect’.

Abandoned by his parents, the baby Wheatle is put into care in 1963 and grows up in the notorious Shirley Oaks, Croydon, Surrey care home. In recent years, it has been the subject of multiple child care abuse cases.

Wheatle was bullied and beaten and routinely humiliated there, as a little boy and was schooled locally. From this, he moved to Brixton and an independent life, but that it had its own challenges and he ends up in prison before turning his life around through stable employment and writing.

“At first, I did hesitate – everyone’s going to see my most dramatic and vulnerable moments, but as the process went along, I embraced it and I realised it could be inspiring for many youngsters.

Siddons and McQueen both wrote ‘Alex Wheatle’ after Wheatle had spent hours talking to Siddons about his life. With another writer, Wheatle had a necessary and safe certain distance – he had developed a one-man show with then Tara Arts director Jatinder Verma in 2011, but it was not an easy task for Wheatle.

He told acv: “My young life especially was very traumatic; it triggered a lot of stuff for me to deal with – and most of it was about my Brixton experience (talking about the one-man show) but Alistair was good at picking out what was important.”

It’s been a long journey from Wheatle’s debut novel, ‘Brixton Rock’ in 1999.

Without wanting to spoil tonight’s episode, it was an unlikely figure who put him onto writing and thereby changed his life. You will see tonight who that person is – and yes, he remained in touch with Wheatle until his own death four years ago.

“I had been crying out all my life for someone to mentor and believe in me and that was the important thing, he actually saw something good in me.”

After prison, he continued to read voraciously and began to write poetry at first and then started to appear at poetry slams and slowly, he moved onto short stories, notes, diaries and various longer miscellaneous prose pieces that would feed into ‘Brixton Rock’.

In the drama, there are early signs of his talent as he creates song lyrics and performs in community settings as a teenager, but arguably the macho world around him checks this and puts him on another path that led to prison.

For ‘Brixton Rock’, he got 27 rejections and his initial submissions to literary agents and prospective publishers were in his own longhand writing.

“I didn’t know anything about the business, I had no idea I had to type it,” he chuckled.

“It was after ‘East of Acre Lane’ (his second novel and about two young men faced with difficult options as Brixton simmers during the 1980s) – and it was critically acclaimed everywhere – that really set me up for my career and when I had started to appear in the media then, I thought I could do this (for a living).”

By this time, he was a skilled machine operator on an engineering shop floor and was raising a young family – but the sales of his book and media interest meant he could move to the next chapter of his life – as a full-time writer.

He hopes the Small Axe series will leave a legacy and inspire others.

He told acv: “I really see this as an opportunity for the black diaspora here in the UK and further afield, to tell our stories and for them to be seen and have value.

“I want to see, in the near future, all our narratives come to the screen, whether it be in comedy, sci-fi, or whatever genre.

“Our stories are as important and as valuable as anyone else’s. I want to put on notice you can’t be dismissive because it’s not your culture.”

While he was feted within the black community and known to parts of the creative establishment, he didn’t become a name in the way that Zadie Smith or Andrea Levy became in the late 1990s.

Class played its part, he feels.

“Obviously I am not Oxbridge, I just emerged out of nowhere and because of that, they (the literary establishment) don’t see me in the same light as others who have – and they can’t imagine anyone outside of that being their equal.”

He believes Small Axe has turned the dial and hopes it now can’t be turned back.

“I want others to be inspired and to write their particular narratives or stories and I want them to get it out and onto Amazon Prime or Sky, or the BBC, ITV or Channel 4 or whoever.”

And so, what does the future post Small Axe, which ends next week, hold for him?

“My success can’t just be for me. I have got to pass it on somehow – otherwise what does success mean – someone pulled down a ladder for me, I want to elevate whoever is coming after me.

“I am not ready for my memoir yet – maybe when I have run out of fiction,” he teased.

“I do like collaborating,” he said, clearly bitten by his experiences on Small Axe. “I’d like to build a creative hub to bring ideas to the screen or stage.”