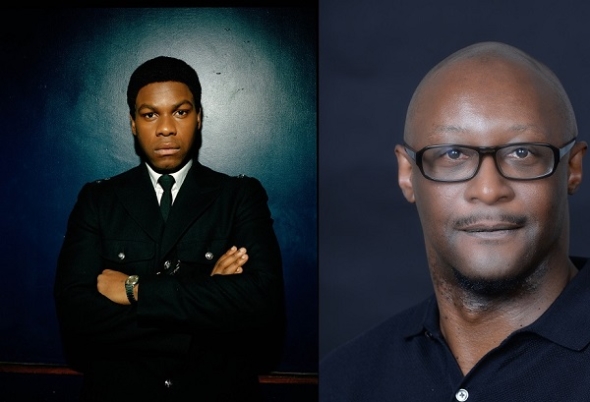 WE HOPE you have had the chance of watching at least one of Sir Steve McQueen’s BBC Small Axe series now. It is available in the US on Amazon Prime and some other territories.

‘Mangrove’ and ‘Lovers Rock’ were screened for the first time on previous Sundays (November 15 & 22) on the BBC. And of course, you’ve read our reviews and/or our interview with ‘Lovers Rock’ co-writer Courttia Newland who wrote it alongside Sir Steve McQueen.

This coming Sunday (November 29) in the third of the Small Axe series of five, is ‘Red, White and Blue’ (‘RWB’), which is also co-written by Newland and in the acv interview, he talks about the Leroy Logan story almost going untold.

Leroy Logan was the first black police office in the Metropolitan Police Force. It’s a story about acceptance in many ways and all these films are simply brilliant and very enjoyable, though not always an easy watch.

The lead role in ‘RWB’ is played by Star Wars icon John Boyega (there’s a great line in ‘RWB’ about ‘The Force’ – Newland told acv, it was there long before they knew who was going to play that part…haha). It will make you smile. And it’s entirely in keeping with the dialogue and the times – being set in the 1970s.

Courttia and myself go back a way – to a hilly top somewhere in the north of England (Shropshire Hills to be more precise).

We were both on an Arvon residential writing course – he was one of the tutors and I was a pupil, along with a dozen or so others trying to perfect our craft as creative storytellers.

I remember Courttia and myself chatting and feeling all slightly awkward and sharing our sense of dislocation – as blokes from the city and outnumbered by the predominantly white, middle class, female quinquagenarians (50-59) and even older. Lots of blue rinse, if you get my drift. Haha.

But we had a decent time – and Courttia has been a regular on Avron and said it was the students that kept him going back.

Fast forward quite a few years and we reconnected, thanks to Joy Francis, the founder and director of Words of Colour (WoC).

Courttia and I were both on the steering advisory board of this writers’ development agency (by this time, my own novel for teenagers had been published ‘Asian Triangle’).

It was great to see him again and though, he had to drop out of WoC due to work commitments (hmm, yes Small Axe and Sir Steve McQueen calling, though I didn’t know any of that…), I continued to watch his development from first time novelist at Arvon in 1997/98 to becoming a major British voice…and then in March of this year or thereabouts, and just as Covid was making its horrible presence felt, news came through that two British TV films had been selected to appear at the Cannes Film Festival in May of this year – ‘Mangrove’ and ‘Lovers Rock’ – yes, by you know whom.

We were actually prepping our own trip to cover the Cannes Film Festival 2020 – as you may know it’s become something of a fixture for acv since 2014. (Seen our video about coving the festival on our ACV Youtube Channel?)

I had been going myself since 2009 and was there in more of a personal capacity, and filing what I wanted as editor of Eastern Eye (2009-12). How I got to my first Cannes Film Festival is another story – and for another time.

Veteran Eastern Eye columnist Amit Roy had been going many years and would do more news style stories. I tended to watch more films and review – these days with acv, I hardly see more than a handful – I am in full presenter/producer mode with the video team now and don’t get much chance either to watch or write as much I might like. And we sometimes have sponsors and commercial work too – which helps to pay our way to cover the festival.

But back to the Cannes 2020 that wasn’t – it would have been fantastic to cover both ‘Mangrove’ and ‘Lovers Rock’ playing at the Grand Lumiere (capacity: 2,000) and it would have been a real highlight and something really special to have interviewed Courttia and others in Cannes (whether we would have done, considering the media demands and our relative size is an open question), but the personal connection was strong and perhaps the beeb would have seen it as Brits helping Brits. I hope so.

If you’ve read ‘The Scholar’, Courttia’s first novel, you will know that his own life wasn’t hugely different to that portrayed in the novel’s pages, if I recall, correctly, there is a young guy, smart, ambitious, studious, growing up in a tough and deprived part of London, trying to become a writer and no one gives him much hope – in fact some laugh, some don’t understand and a few think he is just a hopeless case – as Sarfraz Manzoor’s dad (Kulvinder Ghir) tells the young Sarfraz (‘Greetings from from Bury Park’) in Gurinder Chadha’s 2019 film, ‘Blinded by the Light’ – “Writing is a career for white people” – stop being silly and think about a proper job.

Courttia says Cannes would have been “the icing on the cake”.

It’s a shame I didn’t get to tell you all this in Cannes myself this year; and there’s a part of me that would have loved to have seen the world watching ‘Mangrove’ and ‘Lovers Rock’ and going gaga as they did over ‘BlackKklansmann’ (Spike Lee) in 2018 or ‘Diego Maradona’ (Asif Kapadia) in 2019, and which has more added poignancy since the footballer’s sudden demise on Wednesday (November 25).

Next week, you can read acv’s interview with Alex Wheatle, who had a whole film made about his early life and how he became a writer – taken into a cruel care home as an abandoned orphan, then raised in Brixton and imprisoned later, his early young adult prospects didn’t look great, but he is now is one of the country’s most successful writers for young adults.

Sir Steve McQueen chose him to be one of the writers on Small Axe and decided to make a whole film about that tough early life.

I’ve got to know him a bit too, thanks to Joy and Words of Colour. Alex is also a steering advisory member of WoC. She certainly knows how to pick em’. Haha.

And I am very, very privileged to know both writers personally and find them and their respective works, hugely inspiring. They are not just brilliant writers, but wonderful men and their success and recognition now is much, much deserved and must be celebrated!