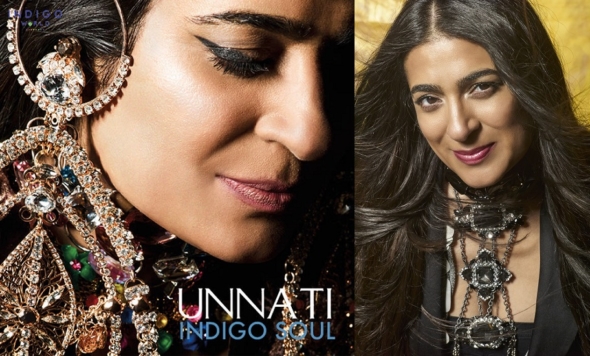 COMING from a classical Indian musical background, singer Unnati Dasgupta is attempting to break down genre barriers and prove that styles and traditions are there to be imaginatively rendered.

Her first ten-track solo album, ‘Indigo Soul’ – released almost exactly a month ago, mixes religious Bhajan (devotional song) style with Jazz or Latin and has also Bollywood elements and features of western pop to it.

Unnati also told www.asianculturevulture.com perhaps a little tongue-in-cheek that it also has “a London circuit sound”.

‘Indigo Soul’ has attracted the attention of the popular African music streaming site Boomplay. It selected six of the tracks from ‘Indigo Soul’ for two curated playlists, in Weekly New Music and Monday Tunes; it has some 62 million users.

Hungama, one of India’s most popular entertainment sites, has selected ‘Indigo Soul’ in its Top Hindi Album list. Her Spotify analytics reveal a global listening audience.

Last year, she played at The Pheasantry in Chelsea – a prestigious and popular jazz venue and she also performed a free evening spot at the Darbar Festival, the country’s biggest celebration of Indian classical music annually at the Southbank Centre. In November, she sang tracks from her album as part of a debut at the London Jazz Festival.

In 2015, she sang at the funeral of Sir Richard Attenborough, the director of the Oscar-winning film, ‘Gandhi’ and believes she is the first person ever to sign a bhajan inside Westminster Abbey.

Raised in North London, and mentored by her late father, Nitai, she grew up in a household where Indian classical music was the foundation for a life devoted widely to art and culture.

She has been a professional musician for some years now, recording, performing and teaching.

Her father, who died in 2003 from cancer, was also an Indian vocalist and was one of the pioneers of the Indian classical musical scene in Britain.

He left Kolkata and performed and taught here from the 1960s onwards. Nitai trained under Ustad Amir Khan (1912-74) who was a legendary figure and honoured by the Indian government for his contribution to music, and Nitai was among the first to popularise Indian classical concerts in the UK.

Unnati, who first began performing with her father as a young girl, still remembers concerts where all the audience sat on the floor and were far more demonstrative than they are today.

Nitai also accompanied the legendary Ravi Shankar when he performed in Britain and Europe.

Last year Nitai’s own debut album was re-released on vinyl for the first time. ‘Songs of India’ was originally published by Mushroom Records in 1972 as part of an album featuring other musicians. There’s been a recent revival of interest in the style of music he produced – it was described by one music website as “Indian pop meets classical and psychedelia”.

“He was very open-minded,” said Unnati talking more generally about her father’s influence. “It was great to have him as my mentor and he always said music should come from your soul and be a representation of your identity.”

It was her father who encouraged her to write her own songs and express herself freely.

There was also a procession of famous names from the Indian classical scene who stayed at the family home when they came to perform in Britain and Unnati was deeply inspired by this upbringing and environment.

“I feel blessed – many people still come up to me and talk about my father and say he was the best vocalist,” Unnati remembered.

What is most noticeable about ‘Indigo Soul’ is its range of styles and sounds and the different arrangements – all inspired by Raags – Indian classical melodies.

“I see myself as crossing genres,” Unnati told acv on the phone last week. “I don’t see myself in one – there’s so much amazing, influential music around, and I don’t neatly slot into one category.

“It is world music, Indo-Jazz and Indo-pop; I am doing music that is both English and Indian and which reflects my history, ethnicity and background.”

‘Indigo Soul’ took three years to produce and is guided by Unnati’s musical gut, if we can put it like that.

In the ancient Indian system of dividing the body into ‘chakras’, Indigo represents the sixth chakra, referred to as ‘Ajna’ – the third eye in more common parlance.

“The title is about spirituality and intuition,” Unnati explained.

You could say it is music that comes from a deep place and is the product of a good many years studying, performing and teaching – and life itself in between.

She freely admits she is not a purist – nor was her father or her great inspiration Ravi Shankarji, as she calls him.

“People say Indian classical music is niche, but Ravi Shankarji took it around the world; he too was open-minded and I’ve heard it said he liked Lady Gaga,” she chuckled.

For this album and possibly only this one – all the tracks are sung in Indian languages – Hindi, Gujarati, Hindustani, but have a very discernible influence.

“There’s a lot of classical influence, based on a lot of Raags and melodies steeped in Raags but the arrangement is jazz, pop, it’s not a purist type of album. I wanted it to be an album accessible to all.”

She’s using the present time under the Coronavirus lockdown to write more songs – and in English; and develop her commercial interests too, in doing events, film music and also championing other artists under own label, Indigo World which she created to release her first album.