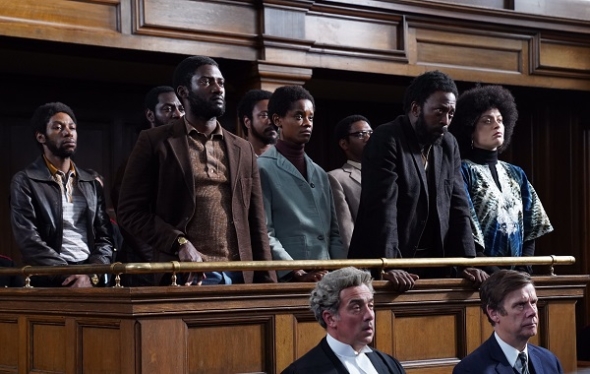 VITAL, urgent and moving – ‘Mangrove’ is the quite brilliant new film from Oscar winner Steve McQueen (‘12 Years A Slave’ – Best Picture in 2014).

This is history – British history like you have never seen before.

It has been a long time coming and is a magnificent tribute to a generation that suffered and toiled; and now must be seen as absolute heroes of this island’s long and unfolding story.

‘Mangrove’ screened last night at the London Film Festival (LFF) and will screen on BBC One on November 15 – make a note in your diary! It will be one of a series of five films that McQueen has made for the BBC called, ‘Small Axe‘. (See below)

It is unfortunate in some respects that it did not have its world premiere at the Cannes Film Festival this year. It was selected to play in the main section and when you want to announce a film to the world – Cannes is the place. For this critic, it would have been utterly fitting for the world to appreciate this film at the same time – and for the talent behind it to bask in the glory of their achievement.

The story is quite simple and based on true events – ‘Mangrove’ is the name of a restaurant in Notting Hill, west London.

It is run by Frank Crichlow (Shaun Parkes), a gregarious, friendly man who is ground down by the system and its glaring injustices.

Mangrove makes great roti (!) and the restaurant becomes a focal point for the local community and in doing so attracts the attention and ire of PC Pulley (Sam Spruell).

He is a local copper who likes throwing his weight around and is a bully as well as a racist; he simply can’t abide the idea of a black man owning a restaurant and making it in Britain.

The police are constantly harassing Crichlow and his patrons.

He just wants to run a successful business and had the means to do so – but the police and the authorities had other ideas.

Crichlow doesn’t really know what to do and there is tension among the community in how to respond to the provocations.

Of course, many folks are doling out advice, but perhaps the most cogent and intelligent comes from Darcus Howe (Malachi Kirby). For those of us who seen the real Howe – Kirby is uncanny in voice and intonation. It’s a brilliant portrayal. Howe was an intellectual and much in the media in later years. He had a brilliant mind and knew how to organise and attract attention.

A very inspiring group of people led by Howe, and a new political grouping – the Black Panthers – agree to meet the prejudice head on and decide that ‘the softly, softly, keep your head down approach’ (of Crichlow) is no good, because the police just keep coming back for more and more and that change can only come through organisation and being strong together.

A demonstration turns into a ‘riot’ – the police have it in for the marchers from the outset and the nine – who come to be known as the ‘Mangrove Nine’, are charged. The story behind this trial has not really been told, until now.

The case is sent to the Old Bailey – which was absurd even then. For the Old Bailey usually hears only the gravest of cases – the demonstration ended with some scuffles and had the police tactics not been so aggressive and hostile, it seems unlikely to have become anything – except a demonstration of hope.

Jail seems the likely outcome with everything weighed against the Nine; but the intelligence and dignity of the group in the face of overwhelming hostility and prejudice is moving and what gives this film its strong emotional core – especially as Crichlow is such a genuine and likeable individual who is denied justice. It is shame he didn’t live to see this film – he died in 2010.

The acting is also fantastic – expect Parkes as Crichlow, Letitia Wright as Altheia Jones LeCointe and one of the leaders of The Black Panthers, and Kirby to be up for awards this year. Rochendra Sandall, in a supporting role, is also excellent as Howe’s partner Barbara Beese. It’s a briliant ensemble effort.

McQueen’s direction is pitch perfect. He tells this story through these captivating characters and the setting and atmosphere all add to a film that stays with you and will pass through the generations, as a story of power and hope – and it couldn’t be more timely.

A warning though – don’t watch this film if you are hungry and are a bit partial to stewed chicken with rice and peas or West Indian roti!

‘Lovers Rock’ another one of the BBC One Small Axe series screens at the London Film Festival on the last day, October 18. Check returns and day tickets – see https://whatson.bfi.org.uk/lff/Online/default.asp

Lookout for our interviews about the Small Axe series – coming to www.asianculturevulture.com