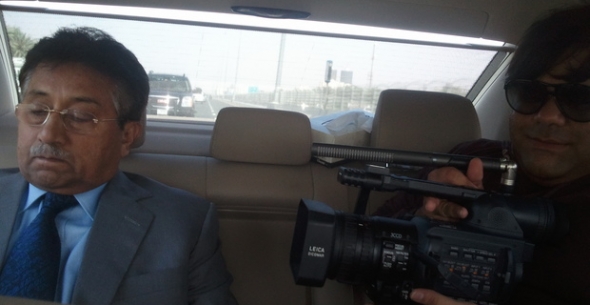 FOR ANYONE interested in contemporary politics in Pakistan this is a must watch – but it is also much more and offers a deeper and more balanced perspective on the wider geo-political currents that shape that country’s internal affairs.

Entertaining, and enlightening, and even very funny in places, director Mohammed ‘Mo’ Naqvi’s film, ‘Insha’Allah Democracy’ is one part exploration of former Pakistan military dictator, Pervez Musharraf, and another, an examination of democracy in Pakistan.

Covering a period of some five years, it starts with ‘Mo’, the filmmaker as he is known to the Musharrafs (Pervez’s mother included), shadowing the former dictator, as he reinvents himself in Dubai, and prepares to return to his homeland to fight an election as plain old Pervez.

Naqvi is upfront and explicit at the beginning, he adores Musharraf.

The man who took control of the country in a bloodless coup in 1999 was a saviour and hero to Naqvi.

As a Shia minority, he looked upon the growing sectarian violence in Pakistan, with increasing horror and trepidation.

Musharraf tightened security and maintained a level of order and discipline that brought benefits: the economy improved, the media wasn’t much shackled and people felt safer and securer.

It wasn’t all sweetness of course and the Army could just about do anything and get away with it; and the courts were stifled at the highest level.

At first, Naqvi accepts this, as the price to pay for stability and order, but the film shows the flaws and the contradictions and well…

Let’s say he ends up in quite a different place.

Musharraf is an engaging character in his own right, and the opening is funny, and telling in its own way. Soon enough Naqvi or ‘Mo’ becomes another character in the former dictator’s Dubai constellation.

“I never intended to put myself into the film,” Naqvi tells www.asianculturevulture.com following the world premiere screening at Sheffield Doc Fest 2017. “But it was an important political journey that I was going on and it wasn’t just me – it was other Pakistanis too, in that sense.”

Indeed. But you have to watch the film to understand and truly appreciate that.

Engaged, but not preachy, Naqvi’s style of filmmaking has a lot going for it.

He’s open, friendly and not tied down by labels or rigid political positions and it shows in the film he has made.

“I wanted to take a geo-political situation that is happening all over the world, especially with a country, like Pakistan, which is mired in so many different complex political worlds and I wanted to distil into a very relatable humanistic way, so a lay person could actually understand it – and that is why I put myself into it.”

Forget the party politics for a moment, Musharraf represents the middle class of Pakistan, he’s comfortable talking in English, is liberal and comes over as a not unreasonable person, just a shade (?) consumed by his own ego.

The other two political figures in this film do appear albeit briefly, the current prime minister, Nawaz Sharif and former cricketer now campaigner and MP Imran Khan.

Both are more sympathetic to religious elements in Pakistan and may not have backed former US President Bush’s war on terror, post 9/11.

Musharraf argues he had little choice but to go along with it – and the consequences for locals has been devastating, some would posit – and Naqvi does too.

“The reality is that the US has a huge influence in where we are right now (in Pakistan), it has affected us adversely and perpetuated terrorism and extremism in a country like Pakistan rather than curtail it,” stated Naqvi to www.asianculturevulture.com

This film isn’t really about that – though it does suggest that many (bad) things stem from the war on terror and that Pakistan continues to have a foot in both camps (because of what it perceives as a constant threat in the form of India).

It’s complicated, but what is refreshing about Naqvi’s film is that it does offer some answers…

The film was financed through a number of sources and is co-produced by documentary specialists, Impact Partners in New York and Tribeca Film Institute, as well as through Naqvi’s own sources.

It has only just been completed and he is talking to potential distributors.