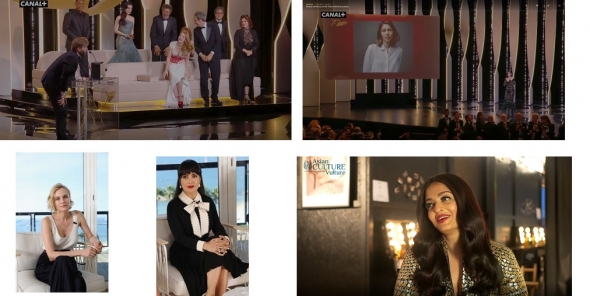 A general wrap – the winners and the Bollywood contribution…

IT WAS A GOOD night for women at last night’s awards ceremony, bringing the curtain down on 70th Cannes Film Festival (May 17-28).

Director Sofia Coppola won the best director award for her ‘The Beguiled’, a drama set during the American Civil War and starring Colin Farrell, and Nicole Kidman. Coppola became only the second woman to win the best director award at Cannes. She said one of her heroes was Jane Campion who is a previous winner and was there with a TV project this year. Coppola could not attend the awards ceremony.

Diane Kruger took the best actress prize for a role in the highly topical, ‘In the Fade’ by Turkish director Fatih Akin. Kruger plays a widow trying to pick up the pieces after a Neo-Nazi terrorist attack claims her Kurdish husband and son.

Sofia Coppola with her mainly female cast in ‘The Beguiled’

British director Lynne Ramsay shared the best screenplay award along with Yorgos Lanthimos for ‘You were never really here’, a sex trafficking drama and ‘The Killing of a Sacred Deer’, a macabre chronicling of a family breaking down under a ton of secrets, respectively. (Our reviews page is here).

Kidman won her own special prize – the 70th anniversary prize. She was in three films which screened at the festival and a TV show exhibiting there. She sent a video message of thanks having already left Cannes before the final awards ceremony.

The top award, the Palme d’Or, went to ‘The Square’, directed by Swede Ruben Östlund.

A film about the art world and an exhibition named after the title of this film, it is a biting satire on artistic pretentions and media hyperbole – a PR agency has a prominent role in promoting the exhibition and an ‘ape performance artist’ causes embarrassment and awe in equal measure at a fancy dinner of patrons and supporters.

Pedro Almódovar, chairman of the jury, said: “The film looks at the dictatorship of political correctness.

“It offers several examples of this. It is a very funny film, the actors are excellent and we considered giving the lead actor (Claes Bang) a Best Actor Award.”

Director Ruben Östlund reacted: “We worked so hard and fought to make this film. I come from a long line of Swedish filmmakers who have had their films screened in Cannes.

“So, it’s no coincidence that my film was selected here.

“I think it is important to draw the audience’s attention to the content of the film. When I see the directors I have been in competition with, it is an even greater honour for me to have won this award. If we want to keep cinema alive, we must talk about things that are complex.

Other notable winners were the Grand Prix award (a runners-up spot for the Palme) for ‘120 beats per minute’ which www.asianculturevulture.com saw.

Almódovar summed up the mood of pretty much anyone who saw this film and praised director Robin Campillo.

He said: “I was very moved by the scenes in this film, from the beginning to the end, and even afterwards.

“The overwhelming majority loved Campillo’s film. I’m sure it will be well received. Campillo tells the story of heroes who saved many lives, and he brought this to our attention.”

It’s a little dry and hard-going in places but once Moroccan-born filmmaker Campillo focuses on his central couple, the film really begins to gather emotional impact and ends on a very powerful note.

The Jury prize, which is akin to a 3rd place, went to Russian director Andrey Zvyagintsev’s ‘Loveless’.

Women remained a theme throughout – India L’Oreal Paris ambassador Sonam Kapoor called out the “rampant sexism” in India preventing women directors from getting their dues and talked to www.asianculturevulture.com and acv’s special presenter Attika Choudhary about her latest film projects and the women angle on them.

Aishwarya Rai Bachchan, another L’Oreal Paris ambassador, presented the Bollywood film ‘Devdas’ at a special screening organised by her sponsors on Saturday (May 21). L’Oreal were celebrating 20 years of its partnership with Cannes.

The film directed by Sanjay Leela Bhansali and starring Aishwarya and Shah Rukh Khan premiered at Cannes in 2002, but out of competition. It was one of the first films to appear in an official selection since the days of Satyajit Ray in the 1950s. India has enjoyed more official entries since, but only in the Un Certain Regard section (the second most prominent sidebar), and not the main competition.

You can see Ash talk to Attika about the experience of ‘Devdas now and then, in our interview, shot just moments after presenting the film at the L’Oreal beach cinema there.

Will Smith was a star of the festival

Kruger and Hollywood star Salma Hayek Pinault appeared at the women in motion talks, which are hosted by another of Cannes’ big sponsors, Kering – (a high end clothes group, made up of brands Gucci, Stella McCartney and Puma, among others and Hayek’s husband is Kering CEO François-Henri).

We were there on Tuesday (May 23) when Hayek expressed her deep anxiety about the terrorist attack on the Ariana Grande pop concert in Manchester, and while those comments made headlines around the world, she also spoke about the wider case for women in film.

Kruger whose film is about the subject of terrorism and coming to terms with its destructive consequences, also voiced her experience of sexism in the industry.

The festival began for us in earnest, on the sides of the Jury press conference. There is no doubt that Hollywood megastar Will Smith brought his own infectious energy and enthusiasm anywhere he went in Cannes as a jury member.

A surprise choice for the jury, he made a big impression and appeared to enjoy the experience thoroughly.

At the closing awards ceremony, he declared: “As Jury members, we talked a lot about the future of the Festival de Cannes, building bridges with films from communities all over the world. With Park Chan-wook, we are keen to work with Thierry Frémaux (festival director) and Pierre Lescure (chairman) to create a kind of board that would build bridges between films from remote communities and Cannes, so they could be better represented.”

So maybe there is some hope for South Asia and India which was not represented at all in the official selections this year.

Last year, Indian indie icon director Anurag Kashyap’s crime fable, ‘Raman Raghav 2.0’ appeared in one of the official sidebar dimensions of the fest – the Director’s Fortnight. You can see our 2016 interview here.

Aishwarya Rai Bachchan in the interview

For previous coverage of the Cannes Film Festival 2017 (use Cannes 2017 in our search bar); for social media coverage look up #cannesacv17.

FROM TOMORROW – Aishwarya Rai Bachchan, Sonam Kapoor, and Satinder Sartaaj (The forthcoming ‘The Black Prince’) on YOUTUBE – make sure you’ve subscribed to know when they are out!

The videos will be here as well – make sure you’re following us on TWITTER/FACEBOOK.

With your help, we can make more videos like the above…