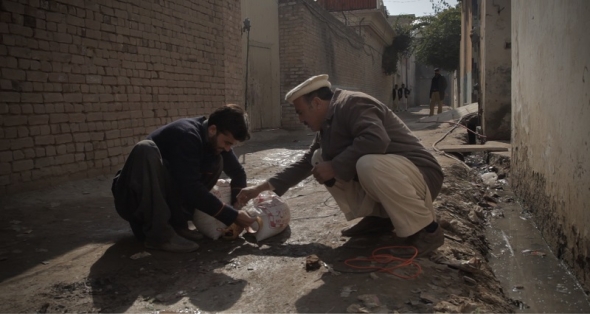 DON’T watch this film if you’re a little squeamish.

It’s not graphic in its coverage of what the bomb disposal squad, in Khyber Pakhtunkhwa Province (KPP), a region that straddles Afghanistan and Pakistan, actually do – but there’s a constant fear (even while watching) that you are going to witness something really quite gruesome.

Everywhere the camera goes, you go and that means approaching devices and watching a member of the bomb squad defuse or detonate it safely.

You know from quite early on, it doesn’t always go to plan…

Thankfully director and principal cinematographer, Asad Faruqi, was at Sheffield Doc Fest 2017 (June 9-14), for the world premiere of ‘Armed with Faith’.

“I lived in that area,” Faruqi told www.asianculturevulture.com. “My family is from there and I was reading a newspaper report about the bomb disposal squad and it was reporting the death of one their men, who had defused so many bombs.”

Produced by documentary Oscar winner, Sharmeen Obaid-Chinoy, and co-directed and co-produced by Geeta Gandbhir – who was also in Sheffield – this documentary takes us right into the very battleground of the war on terror and its impact on communities on the front line.

But don’t worry (if you are) – this no polemic and isn’t overtly political – in fact it is a very human story and more powerful for it.

Faruqi embeds himself with the KPP bomb squad and films several key personnel going about their work – it is often dangerous and unpredictable – and hence the title.

What helps to put this film on quite another level is that Faruqi befriends the families of the men – and gets them to speak about their loved ones and the job they are doing.

There are touching scenes with young and older children and you get to know three of the men – the commander and two experienced bomb disposal experts quite well through the course of the film.

“It’s intimate,” described Gandbhir. “We do it for a lot of our films.”

Faruqi, Gandbhir and editor Flavia de Souza (another editor also in Sheffield) have all worked with Obaid-Chinoy on some of her previous documentaries and are part of her team.

Gandhbir said that they often get asked by the professional people they are filming – why do you want to talk to our families?

The answer seems obvious when you watch a film such as ‘Armed with Faith’.

You get a fully rounded picture of the people and the society and it articulates an often different point of view to the western mass media narratives.

In ‘Armed with Faith’, the three men are from very different social strata.

You have the urbane, sophisticated, liberal commander, who speaks to the camera mostly in English. At home, his wife and daughter are filmed talking to him, all quite naturally.

But when it comes to filming two of his officers – one nicknamed ‘Tiger’ for his bravery – both have wives who wear traditional dress and address the camera more formally.

“Access to the families wasn’t easy,” conceded Faruqi. “They are conservative and we used a female cinematographer (for the interviews).”

But the result is very powerful – more so perhaps for a western audience that may never have seen a woman in a niqab express any sort of opinion, really.

This film goes to the very heart of the war on terror and asks what is really happening?

Practically, every day there are suicide bombings and improvised explosive devices left around places where people gather in this region. The war is vicious and unrelenting.

“It’s important for the world to know what they are doing – there is a narrative that says they (Pakistanis) are complicit – that they are not doing anything (against terrorism), that is not true,” asserted Gandbhir. “It is Muslims who suffer the most – that’s why it’s important for filmmakers from that region to come out and tell our stories…”

Like much of Obaid-Chinoy’s previous work, this is compelling and moving, and a just tribute to the work and bravery of men who go about their duty without much recognition or applause.