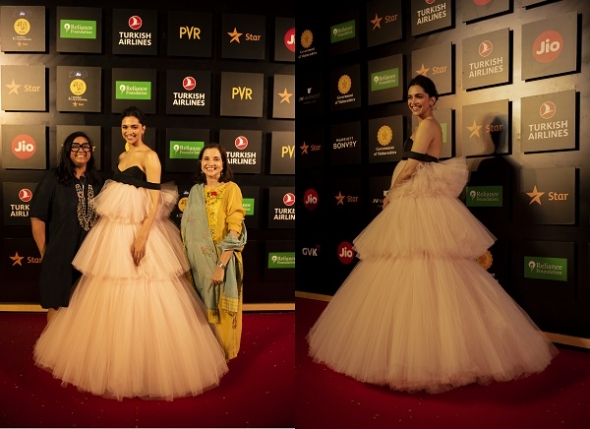 A gathering of the great and the good in celebration of independent Indian cinema, it is currently in full swing…

THERE was glamour and much excitement in Mumbai as its 21st film festival (October 17-24) got underway – with Bollywood superstar Deepika Padukone attracting much attention.

Singh came to international prominence in 2015 when his feature ‘Chauthi Koot’ (‘The Fourth Direction’) had its world premiere in Cannes. Acv covered it.

Last night, many celebrities headed to a party at London’s famous members’ club Soho House in Mumbai. It occupies an 11-storey building in Juhu.

Padukone didn’t surface there – but she certainly got the shutterbugs excited when she walked the red carpet for the opening ceremony on Thursday (October 17).

She had already created a buzz by posting her look for the opening on Instagram before heading to the theatre.

Padukone is chair person of Mami and took over from Kiran Rao (who is working on a film and is the wife of Bollywood megastar Aamir Khan) last year.

Speaking about her appointment, Padukone said that cinema has the power to evoke empathy, foster kindness, and that there can be an innocence of expression when it comes to cinema. She said festivals like Mami bind us without boundaries.

She said it was cinema that helped to give her a sense of identity and purpose and she was now returning the favour through her work with Mami.

Among the international guests is Franklin Leonard – the founder of the Black List, a website which allows scriptwriters and filmmakers to connect and produce new work. He is serving on the India Gold Jury, along with Col Needham, the founder and CEO of IMDB. Cristian Jeune, director of the film department and deputy general delegate of the Cannes Film Festival (Un Certain Regard) and Grainne Humphreys, director of the Dublin Film Festival all make up the jury in this section.

The main international competition jury is headed up by Palestinian-born Hany Abu-Assad, a director best known for ‘Omar’ (2013) and ‘The mountain between us’ (2017) starring Kate Winslet and Idris Elba. The other jury members for this section are Mark Adams, Edinburgh International Film Festival artistic director and Vetri Maaran, an Indian screenwriter, director and producer from the Tamil film industry and Julia Huntsinger, c-director Telluride Film Festival (US). Among those on the Dimensions Mumbai Jury are author and screenwriter Kanika Dhillon (‘Manmarziyaan’) and Bollywood actor Taapse Pannu.

On the night, Deepti Naval was awarded a Excellence in Cinema Award for her outstanding contribution to Cinema with Padukone and autuer director Vishal Bhardwaj handing over the prize.

Naval made her acting debut in 1978 and appeared in more than 60 films, including the iconic, ‘Kamla’, ‘Chashme Baddoor’, ‘Mirch Masala’, ‘Leela’ and ‘Memories in March ’ , among others. She was last seen in Zoya Akhtar’s Amazon Studio-series ‘Made in Heaven ’.

The festival officially got into its groove on Friday (October 18) with the screening of ‘Moothon’ by Geethu Mohandas. It stars Sobhita Dhulipala and Jim Sarbh (the stars of ‘Made in Heaven’) and Nivin Pauly. Indian animation feature ‘Bombay Rose’ screened on the third day of the festival and has previously played at LFF and Toronto International Film Festival, as did ‘Moothon’ .

The festival is screening 190 films in all, with 13 world premieres and 50 debut films. Among the notable international films are ‘The Irishman’, ‘Atlantics ’ ( ‘Atlantique’), ‘Ad Astra’ and ‘Pain and Glory’ and ‘The Report’.

The festival is formally known as JIO Mami with Star; Jio is a mobile telephone company owned by India’s richest man, Mukesh Ambani is a sponsor as is Star.

THIS second feature by actor-director Geethu Mohandas (her first was ‘Liar’s Dice’ and India’s official Oscar entry in 2015) starts off on an island just off the coast of her native Kerala and winds up on the streets of Mumbai.
We are in Lakshadweep – among the turquoise waters of the Indian Ocean – and under the canopy of thick palm trees is an orphaned teenager by the name of ‘Mulla’ (Sanjana Dipu) who misses his elder brother. He has left for Mumbai but there has been no trace or sign of him for some time.
Mulla’s fisherman-guardian often mistreats him and fed-up by this, the young boy steals a boat and heads for Mumbai. He doesn’t make it there the way he expected and lands up in the hands of a criminal fraternity.
We should have seen more of life on the island, more about his big brother (a talented folk dancer) and more about a delicate, forbidden love story which is not properly explored. Despite these reservations, ‘Moothon’ benefits from strong performances, especially by its male leads, Nivin Pauly as ‘Akhbar Bhai’ and briefly Shashank Arora (also ‘Made in Heaven’), as his companion in crime. It also has an amazing cinematographer in Rajeev Ravi and production designer, Abid TP, whose skills would be more appreciable, if the story had more focus and the film had slowed down for its action scenes. (TR)
ACV rating: ** (out of five)

Privacy & Cookies: This site uses cookies. By continuing to use this website, you agree to their use.
To find out more, including how to control cookies, see here: Cookie Policy
← Controversial ‘Hitler film’ wins top Grolsch People’s Award at Toronto International Film Festival (TIFF) and our TIFF 2019 (Dev Patel, Riz Ahmed, Farhan Akhtar and Priyanka Chopra, Jennifer Lopez, Natalie Portman and Adam Sandler)
Farhan Akhtar talks to acv about ‘The Sky is Pink’ film at TIFF, says it is an important film for him… →