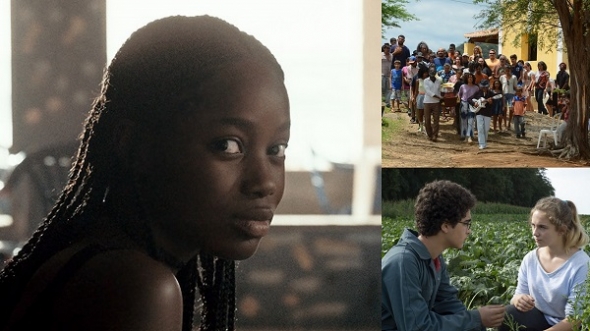 Remembrance of Things past, hauntings and modern migration…

THE NOW-AWARD winning ‘Atlantique’ (‘Atlantics’) is an assured debut by Mati Diop, the first black woman in the Festival’s main competition section and also the first to win a prize*. It shared the Grand Jury Prize with ‘Bacurau’.

This romance evokes colonialism, slavery and boat crossings (and now the worldwide rights have been acquired by Netflix).

A group of young men at a construction site argue with the foreman as they have not been paid for three months.

It’s a great edifice in the suburbs of Dakar, Senegal, and then one of them, Souleimane (Ibrahim Traore) goes to visit his sweetheart, seventeen-year-old, Ada (Mama Sané) who’s engaged to another.

He then disappears as do all the other young men who’ve sailed away across the Atlantic to seek their fortune in Europe while the women wait at the local bar hoping that the boys will return to breathe life into the place.

Meanwhile, Ada marries Omar (Babar Sylla) a wealthy young man and the couple go for a day out at a posh beach, and she also shows her friends her new home. (There is a great scene here when the girls are sitting on the marital bed and taking selfies). The film shows us the position of the women in Senegalese society and as someone says: “the beauty of a woman comes through marriage”.

The cinematography captures a city under construction with images of sand flying over the place and waves of the North Atlantic Ocean getting ever bigger, with evocative music floating through the background.

Told partly as a ghostly narrative mixed in with realism, it’s not difficult to see the echoes of slave trade seeping through the narrative. The film features local actors who speak in Wolof, the dominant local language and the film has an original score, by Fatima al Qadiri, while Diop is the niece of the late, great Senegalese cinema pioneer, Djibril Diop Mambéty and daughter of jazz musician, Wasis Diop. As the film says “memories are omens” and this film has made history already. (SB)
ACV rating:**** (out of five)

Tender and surprisingly even-handed, it has a powerful message…

THIS also picked up a prize in Cannes – winning The Dardenne brothers (Jean-Pierre and Luc), the best director prize.
For some critics, this film, ‘Young Ahmed’ was a little underwhelming. Its subject matter is essentially about grooming and religious radicalisation.

Considering this, the Dardennes keep things relatively low key and situate these topics within a relatively unremarkable young man,
Ahmed (Idir Ben Addi) is hugely influenced by the imam of his local mosque, especially as his father has abandoned him and the rest of his family.

Youssouf (Othmane Moumen) is already spouting lines about a coming Jihad, but warns the teenager that he must not press to early. Both revere a cousin who has gone to Syria and perished.

The tensions are well covered here – Ahmed’s mother is European and Christian – and his sister is more integrated (or less religious depending on your point of view). The process of alienation and distance – separating someone from their family and creating a new authority structure is subtly portrayed and so powerful that Ahmed decides to take matters into his own hands. He attacks his liberal Muslim female teacher, believing her to be an apostate and a living affront to his own values and morals. (She has a Jewish boyfriend, it is rumoured in the film).

His subsequent detention after the assault, shows him being pushed this way and that – and is further complicated when he has a very brief kiss with Louise (Victoria Black) at her instigation. Detainees are required to work on a nearby farm and that is where their friendship unfurls. Of course Ahmed is horrified by his very human reaction to this cute and endearing display of affection and regard – but therein lies an essential point – radicalisation is about an internal process, shedding one skin for another and giving yourself up to those who proclaim to be doing God’s work, but are principally stepped in the love of their own power and egotism – and that has really very little do with religion or faith at all – and it is merely a vehicle for power and control.

The Dardennes may not be espousing an original line in that, but it is a timely remainder and their film is steeped in a Liberal Humanism, we should all aim to re-assert and the Cannes prize seems to be saying that. (SR)
ACV rating: *** ½

SET IN BRAZIL, in an area called Bacurau (fictional or not, it does not matter), this film isn’t for the feint hearted. That apart, it’s a great ride and all the more enjoyable for wearing its politics very firmly on its sleeve.

In what might be termed the Brazilian outback, a small mixed community is getting on with the simple business of living – and dying – the film starts with a woman returning there to pay respects to her departed grandmother.

A much-revered pillar of the community, she draws people from surrounding parts together.

It quickly becomes apparent though, after the violent murders of two water tanker drivers – that not all is well. The water tanker is covered in bullet-holes, so robbery is not the motive.

It has a causal menacing tone until the last 40 minutes when everything becomes that much clearer and there is the build-up to a powerful showdown, where no one will be spared (as you would fully expect).

There are hints of other things – extra-terrestrial beings, spaceships and a sinister controlling other-worldly power that never quite reveals itself.

You can quite understand its Cannes jury prize – polemical, pithy and entertaining, it deserves a wide viewing and hopefully will encourage Dornelles and Filho to be yet more daring and imaginative next time around.

Quite enjoyable if you’re not much of a Donald Trump or Jair Bolsanaro fan but they should watch this! (SR)
ACV rating: ****

Privacy & Cookies: This site uses cookies. By continuing to use this website, you agree to their use.
To find out more, including how to control cookies, see here: Cookie Policy
← Directors get London Indian Film Festival icon awards; mid fest pictures & videos special (all on one page 😉)
‘Combustion’ – final chance to see new play that has got everyone talking… →