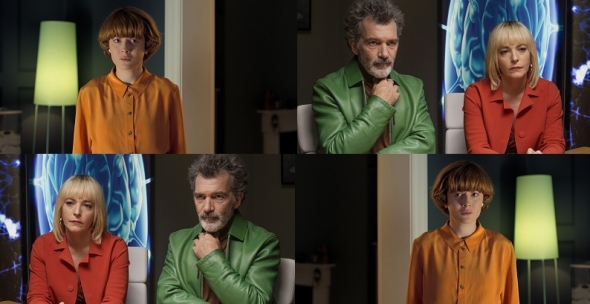 FEATURING Antonio Banderas (as Salvador) and the winner of the best actor prize in Cannes, Penélope Cruz (Jacinta) and Julieta Serrano as the older Jacinta and Leonardo Sbaraglia (Federico) and Asier Etxeandia (Alberto), this is a beautifully shot film.

Cinematographer José Luis Alcaine is in his element in this film about a world weary film director, Salvador Salvo Mallo, who is plagued by aches, depression and anxiety and the film is very much a meditation on art and life.

Salvo is played with great sincerity by Banderas and it begins with a man in a swimming pool, and it appears he’s about to drown but lo, the film gives us a voiceover and begins to flashback to his life – beginning with a bucolic scene of his mother, Jacinta (a wonderful Penélope Cruz), by the river washing and drying clothes while singing.

It’s clearly the most important relationship of his life, and this mother has ambitions for her son to escape their poverty by ensuring he gets a scholarship to go to seminary where he can get a free education. (Later the older mum is played by Julieta Serrano), who categorically tells her son not to use her life as ‘art’.

You sense that the story has parallels with the director’s own life and is ‘auto-fiction’ to a certain degree.

Almodóvar or is it Salvo talks about his childhood, adulthood, loves and movies. He is materially well off, but dissatisfied and suffering from writer’s bloc and he has not made a movie for a while.

The film has some amusing lines: “When pains coincide, I believe in God, otherwise, I am an atheist.”

Salvo learnt geography through travelling with his films and anatomy through his own aches and pains. There is a lovely bit about when he lived in a cave as a child and falls in desire with a young builder.

For the present day, Salvo is about to have a retrospective screening of his 32 year old film and he hasn’t spoken to the lead actor, Alberto (Asier Etxeandia) since the original premiere when they fell out, so he goes to see him and as they begin to reconnect, the friend introduces him to heroin which leads to introspection, discussion and resolution.

This is a film about the big things in life such as acknowledging your past mistakes, reconciliation, forgiveness, grief, getting your mojo back and mortality. (SB)
ACV rating: **** (out of five)
The film will release on August 23 in the UK and the UK premiere will be at Film 4 Summer Screen Somerset House on August 8 with the director present http://www.somersethouse.org.uk/whats-on/film4-summer-screen/pain-and-glory

EMILY BEECHAM’S win in the actress category at the Cannes Film Festival 2019 was something of a surprise – pleasant, but a little unexpected.

She’s certainly good and a lesser light might not have carried this film so ably on her shoulders.

This is the director’s first film in English and it is part backed by BBC Films.

Set in what appears to be – or near – contemporary times, Beecham plays Alice, a rather dull and plain single mother who lives for her work.

Her ex-husband and father of her child is in the distance and contrastingly lives in the countryside and we do see him, though he somewhat bookends the film.

Beecham’s character has genetically engineered a plant which has a beautiful fragrance and in the chemicals it emits makes people happy. So far, so good – and that is her bosses’ aim all along. However, the plant can’t reproduce – as all species must, according to our laws of nature.

There are some interesting ideas here, and the more cerebral you are, perhaps the more enjoyable you will find the moral dilemmas posed in ‘Little Joe’. (The plant is named after her own son). With good supporting performances – Ben Whishaw among them, it holds your attention adequately enough.

The central problem for this critic, is not anything to with the production – which is superb in many ways – but the central conceit of the film itself.

In an old school sort of way (that Hausner is perhaps seeking to debunk?), you don’t really feel for any of these characters, even Beecham’s. Therefore, when it comes to their rather unpalatable futures and some big questions, you might think, good riddance and the film leaves you a little cold. But perhaps, I am the fuddy-duddy here. (SR).
ACV rating: ** ½

These films were seen between May 15-21 at the Cannes Film Festival and reviewed by Sailesh Ram (SR) and Suman Bhuchar (SB).