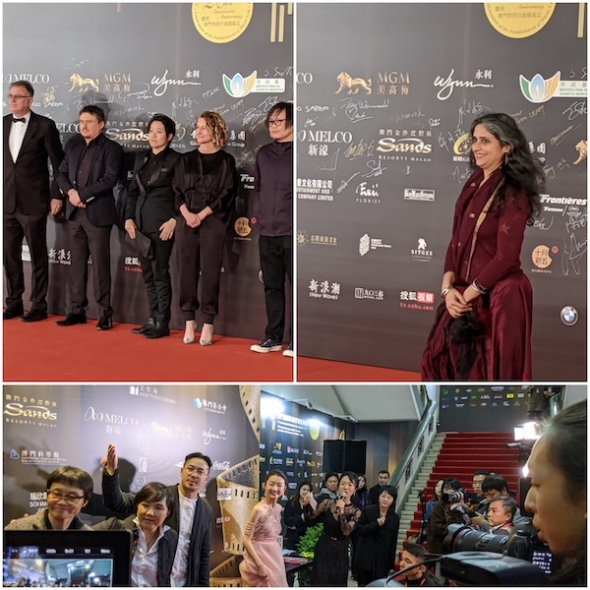 A GALAXY of stars from Asian (Chinese) cinema descended on the red carpet as the International Film Festival and Awards Macao got under way last night (December 5).

For six days (December 5-10), the tiny island state now part of China and run under the same system as in Hong Kong (one country, two systems) becomes a hub for film lovers all over the region and indeed globally.

There are some 50 film features on offer and various stands showcasing both new Chinese cinema and films from Macau itself as it marks 20 years of being part of China and ending its some 400-year association with Portugal (as a colony).

We will be looking at points of interest for South Asian film lovers – ‘Bombay Rose’ – which premiered in Venice and came to London Film Festival is in the international competition. Director Gitanjali Rao walked the red carpet last night. She spoke to us in London, so we will be looking at new films and personalities we haven’t covered at previous festivals.

We will also be looking at British points of interest and watching films from the New Chinese Cinema section.

Last night we saw the Chinese smash and critically acclaimed ‘Better Days’. More on this to follow, laters…

Privacy & Cookies: This site uses cookies. By continuing to use this website, you agree to their use.
To find out more, including how to control cookies, see here: Cookie Policy
← ‘The Massacre that shook the Empire’ – Sathnam Sanghera says the country should apologise for Jallianwala Bagh killings and examine Empire more…
UK Asian Film Festival 2019: Legendary ‘Sholay’ director Ramesh Sippy says next challenge is webseries, curtain comes down – London, Radhika Apte on power, Shabana Azmi on women taking helm and awards… →