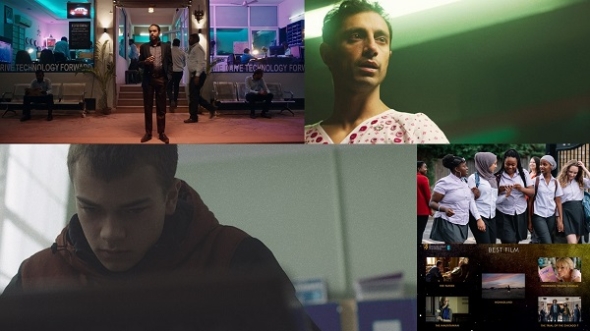 ACTORS Riz Ahmed and newcomer Adarsh Gourav have both reacted powerfully to being nominated in the Leading Actor category at the EE British Academy of Film and Television Arts (EE Bafta) awards announced yesterday (March 9).

Ahmed was nominated for his role in ‘Sound of Metal’ – a story about a heavy metal drummer who loses his hearing. The film had a limited release (because of lockdown) in the UK and is currently available on Amazon Prime in the US.

The film also has nominations in the Supporting Actor category – Paul Racci plays the leader and mentor of a deaf community group that welcomes Ruben (Ahmed) to his new world; and for Sound – the film really encapsulates what it is like being unable to hear. The film is directed by first-time narrative feature filmmaker Darius Marder.

Ahmed, who is currently in the US filming, also had further cause for cheer – his first co-scripted and very personal feature, ‘Mogul Mowgli’ was also nominated in the Outstanding British Film category.

In this very person film, Ahmed – who co-scripted it with US-based director Bassam Tariq – plays the lead character, Zed, a rapper who ravaged by an auto-immune disease has to return from the US to UK for treatment and misses out on a massive career breakthrough. The film deals with the fallout as Zed battles both real and imaginary afflictions at home in the UK.

Ahmed said about both films yesterday: “Thank you Bafta for the nominations for Sound of Metal and Mogul Mowgli. Both these stories are so close to my heart I can’t even explain. We made them against the odds with a lot of love, and to see that love coming back is an incredible feeling. ” (See links below).

Gourav was also nominated in the Leading Actor category for his role in ‘The White Tiger’ – a screen adaptation of the 2008 Booker Prize winning novel of the same name by Arvind Adiga and directed by his friend and college mate Ramin Bahrami. The film also got a Best Adapted Screenplay nomination for Bahrami. It is the tale of a village boy who rises out of poverty to become a wealthy entreprenuer. It is a rags to riches tale but with a lot of uncomfortable twists.

Posting to Instagram, Gourav said: “Holy S**t. Thank you Ramin for trusting me to play the character that has given me more than anything I’ve ever experienced. Congratulations to the team for two Bafta nominations!” (see below for link).

The film, which also stars Priyanka Chopra Jonas and Rajkummar Rao is available on Netflix. Chopra Jonas said she was proud to have executively produced the film. (See below).

Both Gourav and Ahmed are up against Chadwick Boseman in ‘Ma Rainey’s Black Bottom’, Anthony Hopkins in ‘The Father’, Mads Mikkelsen in ‘Another Round’ and Tahar Rahim (‘The Mauritanian’).

Elsewhere, there were seven nominations for the British coming of age drama, ‘Rocks’ and director Chloé Zhao’s indie hit, ‘Nomadland’ also landed the same number. She became the first Asian director (Chinese-born) and only the second to win a Golden Globe earlier this month.

‘Rocks’ tells the story of a teenage girl, Shola ‘Rocks’ Omotose, played by Bukky Bakray, who has to grow up fast when her mother mysteriously abandons her and younger brother. Rocks is still going to school and has to lean on her friends for support and the film explores her relationships, especially that with her best friend Sumaya (Kosar Ali). The film is directed by Sarah Gavron, who also made ‘Brick Lane’ (2007).

Bakray features in the Leading Actress category, and Ali in the Supporting Actress category. Gavron is one of four women in the Director section along with Zhao, Jasmila Žbanić (‘Quo Vadis’), Shannon Murphy (‘Babyteeth’) and Thomas Vinterberg (‘Another Round’) and Lee Issac Chung (‘Minari’). Three of these film also feature in the best film, Not in the English language category – ‘Quo Vadis’; ‘Another Round’ and ‘Minari’. This category also features ‘Dear Comrades’; and ‘Les Misérables’.

For the first time there are 10 films in the Outstanding British Film section, usually there are only six.

Along with ‘Mogul Mowgli’, there is ‘Calm with Horses’; ‘The Dig’; ‘The Father’; ‘His House’; ‘Limbo’ (see review); ‘The Mauritanian’; ‘Promising Young Woman’; ‘Rocks’; and ‘Saint Maud’. Three of these also feature in the Best Film section.

The BBC reported that 16 of the 24 nominations for individuals were from an ethnic minority background.

Krishnendu Majumdar, chair of Bafta, said that the increase in diversity reflected efforts made by the organisation to address criticism levelled at it about its lack of recognition of diverse talent.

“This year’s nominations showcase and celebrate the remarkable range of performances and nominees behind the camera from 50 films and we’re delighted to recognise such high-quality work.

“We are also delighted to see the strength of British film shine through in all categories.

“After last year’s nominations, we started the Bafta Review process with the intention of levelling the playing field and introduced a range of measures to ensure that all entered films were seen by our members and judged on merit. We hope today you can see some of those changes reflected in the breadth and depth of those nominated and we congratulate all our nominees.”

The EE Bafta nominations were announced by comedian Aisling Bea and actor Susan Wokoma at an empty Royal Albert Hall in a Youtube broadcast yesterday afternoon.

Last week, nominees for the EE Rising Star Award were announced – Bakray, Kingsley-Ben-Adir, Morfydd Clark, and Ṣọpẹ Dìrísù and Conrad Khan were nominated. This award is the only one voted on by the public.

Khan features in the searing drama, ‘County Lines’ by debut filmmaker Henry Blake. ACV saw the film at the BFI London Film Festival in 2019 and hailed the director and Khan as talents to monitor. It is the story of Tyler (Khan) and based on true events, whereby a schoolboy gets involved in running drugs (across County Lines) and deals with the terrible changes in his life thereafter. The film, like ‘Mogul Mowgli’ is a BFI release. Here is our short review.

You can vote here http://www.ee.co.uk/bafta

This year’s Baftas will compromise of two shows broadcast on the BBC over the weekend of April 10 and 11.

In the first there will a broadcast look at the very best of film over the year and it will be broadcast from the Royal Albert Hall.

The second show on the Sunday will be the Baftas themselves.

Last year Bafta launched a review looking at how it could better reflect the diversity of talent in the creative community. (For more see here) – https://www.bafta.org/about/mission/the-bafta-2020-review.

The awards are sponsored by EE, a mobile service network provider.

‘Sound of Metal’ enjoyed its world premiere at the Toronto Film Festival (TIFF) in September 2019, where www.asianculturevulture.com spoke to Ahmed and director Darius Marder and others about the film. https://youtu.be/MDpKe8B5FxU
We also reviewed it http://asianculturevulture.com/portfolios/riz-ahmed-in-sound-of-metal-has-depth-and-power-toronto-international-film-festival-2019-premiere/
At the same TIFF, we also spoke to Clark about her role in the Dev Patel starrer, ‘The Personal History of David Copperfield’ – you can see our interviews with Patel, director Armando Iannucci (https://youtu.be/y8nhW0_PAA8) and with her specifically from – https://youtu.be/y8nhW0_PAA8?t=188
The film was released in the UK last year and is available on Amazon Prime.