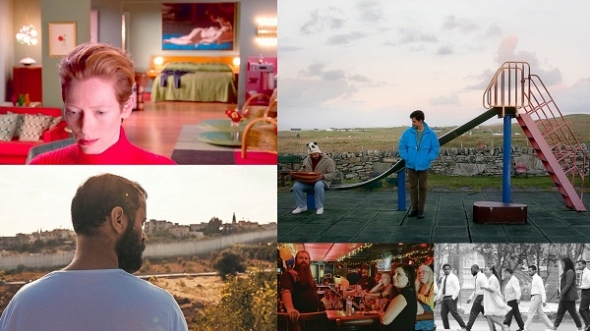 More reviews from London Film Festival by the acv team…*

The Human Voice
Director: Pedro Almodovar
30 minutes
ONE OF THE WORLD’S leading film auteurs takes on his first English language film and in such glorious technicolour, you cannot help but feel seduced.
Based on French artist Jean Cocteau’s (1889-1963) original play of the same title (‘La Voix Humaine’), this is a film made during lockdown and with a discernible theme of communication and absence.
Tilda Swinton is the only character – that and her dog, or her lover’s dog.
Both are waiting for him and brilliant.
The lover’s presence is everywhere though – and in Swinton’s rambling spacious apartment (and set), she finds things to do to pass the time and wait for him.
She does snap and readies for him in a chilling manner… the fun is all, will he, won’t he appear?
We won’t spoil it for you….it’s a great diversion in these torrid times. If you like Almodóvar, this has all his trademark talent and more, and is really unmissable and a very entertaining and beautiful 30 minutes with which to divert yourself. (SR)
ACV rating **** (out of five)

Strong lead in must watch

200 Meters
Ameen Nayfeh
1 hour 36 mins
DEPICTING the complexities of Palestinian life in an Occupied Territory is no easy feat but debut Director Ameen Nayfeh cleverly manages to construct a multi-layered tale that blends politics with emotion. What starts as a predictable storyline, ends up as a well-rounded, depiction of struggle, hope, and resistance.
Mustafa (Ali Suliman) lives on one side of the territory walls while his wife and children reside on the other side, just 200 meters away. When his son has an accident, the only way he can reach the hospital is to be smuggled across in the boot of a car. He’s joined on this adventure by a motley crew of fellow passengers including a young Palestinian boy and a German filmmaker, whose camera eventually lands the group in trouble.
Largely a road trip movie, each character reflects on their reasons for making the dangerous crossing, and as they come up against collective hurdles, their companionship strengthens.
Nayfeh has a knack for portraying tenderness and tension simultaneously and there are many moments that show this flair, but the biggest appeal is lead Suliman. He commands attention in every shot and his strong, sincere performance elevates the film from watchable to a must-watch; well that and the closing scene which will make your heart melt. (MBH)
ACV rating: ****

Tale of hope and humour

Limbo
Ben Sharrock
1 hour 43 mins
AMIR El-Masry shines as Omar, a Syrian refugee who is awaiting asylum on a remote Scottish island in this thoughtful comedy-drama. Whilst in ‘limbo’ he and his fellow companions adjust to life in a bleak, yet bizarre village. They pass the time by attending lessons on how to assimilate into British society while observing the eccentricities of the local community. The postman’s erratic driving, being of particular amusement.
Director Ben Sharrock’s take on the refugee experience as a ‘lonely, unknown existence’ is reflected in the stark grey landscapes the characters reside in. Moments of sadness like when Omar reminisces about his past are balanced by the tenderness of the relationships he builds with his comrades. Sharrock paints their isolated world with such intricacy that when it snows on screen, you can feel the draft in your own home.
He cleverly switches between sensitive scenes that move you, with moments that make you chuckle, and it’s this unexpected style of storytelling at a leisurely pace, with sudden moments that throw you off- kilter, that make for such extraordinary viewing. (MBH)
ACV rating: ***¾

Bloody Nose, Empty Pockets (documentary)
Bill Ross IV & Turner Ross
1 hour 38 minutes
A WORK of improvisation, ‘Bloody Nose, Empty Pockets’ appears to depict a Las Vegas bar on its closing night. As it happens, the venue isn’t in Vegas, but New Orleans, and these aren’t in fact regulars, but drinkers the directors scouted in other watering holes, before letting them take their barstools, and seeing what unfurled. This could seem like prime fakery then, but ‘BNEP’ plays out like authentic observation, capturing a matrix of encounters between people whose connections are as natural and well-worn as its decor. While not without their tensions, so convivial do the bonds seem that the film engenders a deep affection for these characters and curiosity about their lives when they go home. It also lets you escape for 98 minutes into the kind of lived-in 20th century bars now on their way out, sites of nostalgia you might wish you could wander into, particularly in these times of pandemic-induced bar closures and uncertain futures. (SC)
Acv rating: ****

Time (documentary)
Garrett Bradley
1 hour 21 mins
LIKE a microcosmic spin on Ava DuVernay’s ‘The 13th’, Garrett Bradley’s Time picks up a strand of that film’s remit – the disproportionate sentencing doled out to African-Americans, and brings it to life via Fox Rich, wife to a man currently serving a sentence for a bank robbery committed during a desperate point in their marriage. Bradley doesn’t dwell on the crime, but through a wealth of archive footage, shows what it’s like to wait in pain for a loved one to arrive home. Rich is an extraordinary gift of a character, but Bradley resists shaping Time into an inspirational tale of exceptional womanhood. Instead, it’s an intimate testament to her devotion as a spouse and determination to keep their family of six boys afloat. Stitching her story together with a blues and classical score, it affords Time a lyrical quality that few documentaries possess. (SC)
ACV rating: ****