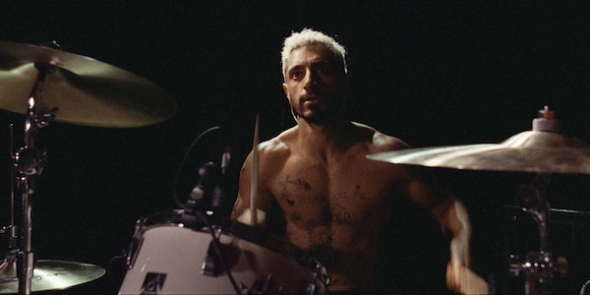 REFLECTIVE and gentle (not always), ‘Sound of Metal’ is an intimate and affecting portrait of a young man in crisis.

Playing that man – ‘Ruben Stone’ – is Riz Ahmed. It’s not like he hasn’t been here before – four years from when the movie is set, Ruben successfully kicked his heroin habit.

But as the film begins, the heavy metal drummer is losing it again – this time not through anything he can control – but his hearing is going and within hours – gone completely.

The prognosis is not good – his hearing loss is very profound and the only solution is implants behind both his ears. This isn’t what Ruben wants to hear and the $40,000-80,000 price tag for the implants presents another challenge.

Ruben is understandably freaked out by the whole experience – the life he has with girlfriend and fellow band member – as a singer – is crumbling before him.

‘Lou/Lulu’ played by fellow Brit Olivia Cooke is equally disconcerted, but approaches the issue more rationally and reaches out to someone who helped both Ruben and her kick the heroin habit (yes, she has issues of her own as we learn later).

Their fixer sends them to a community of deaf people – there are strict rules, no phones and very clear lines of authority. It is self sufficient and cut off from the outside world – no one is allowed a mobile phone.

Ruben has to deal with his issues on his own and Lou heads off back home to her native Paris and her father – though you wouldn’t know it because she speaks with an American accent. There is no hint, indirect or otherwise, of her French background.

Ruben establishes good relationships in the community – after the initial difficulties. He helps young primary schoolchildren learn to play the drums at a deaf school and forms a connection with an attractive female deaf teacher in charge there.

However, director Darius Marder is not interested in the new relationships as much as the old ones – and lets his camera and soundscape do the work. Ruben’s world is actually silent and Marder takes you into a world that is hard to imagine.

These scenes are quietly powerful and at one level, we believe Ruben is coping and getting on with his new life – but at another level, not very obviously delineated, he is making plans to connect with his previous life.

Without wanting to give the whole plot away, Ruben follows Lou to Paris and there, there are further revelations.

Marder makes few, if any, value judgements over Ruben’s choices – in fact he shows a degree of sympathy that isn’t really warranted.

Ahmed plays Ruben powerfully and you can see why he liked the script and the director to make this film. Really it’s a film he carries on his own shoulders and it works.

Marder told us on the red carpet that it is about two people – and yes, it’s a love story of sorts… and very much about how people want to preserve things that cannot be maintained… at some level, we will all face physical deterioration – and how we cope with it will define our lives and our relationships and Marder seems to be asking us more pointed questions about what we should keep and what should we let go – not just ideas and ambitions – but more about the people around us and our understanding of ourselves. Acv rating: ***1/2 (out of five).

Seen our video interviews with Riz Ahmed and Darius Marder…

Privacy & Cookies: This site uses cookies. By continuing to use this website, you agree to their use.
To find out more, including how to control cookies, see here: Cookie Policy
← UK Asian Film Festival 2019: ‘Evening Shadows’ (review) – Parents take centre stage in coming out drama…
UK Asian Film Festival 2019: Struggle not submission – Southall Black Sisters 40 years and drawing the dots between then and now… →