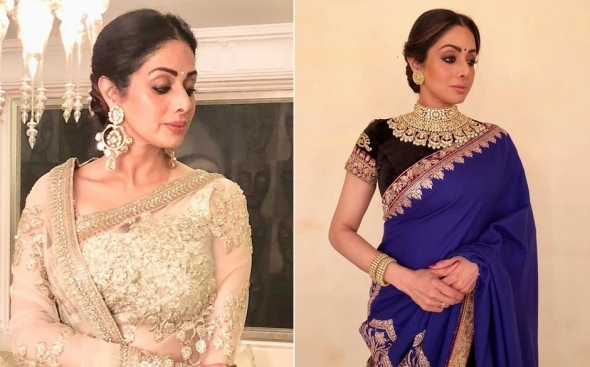 SHE IS OFTEN referred to as the first female superstar of Bollywood films.

Her career spanned a lifetime – from child actor to a starring role in a film last year. She won a legion of new fans as the step mother of a rape victim who fights back and one by one disposes of her stepdaughter’s attackers after the legal case collapses.

Sridevi was much loved and news of her death in the night (UK time) yesterday (February 24), sent a lot of India and the wider world that loves Indian cinema into deep shock and mourning.

She was just 54. Dubai police said she had died from accidental drowning. Her body has been released and it reached Mumbai on Tuesday evening. Her funeral will take place tomorrow (February 28).

She posted quite a few shots from the wedding celebrations on her Instagram. (https://www.instagram.com/sridevi.kapoor/) account. The actual wedding had taken place on Wednesday.

One of her best known co-stars Rishi Kapoor told the Hindustan Times: “I don’t think there has ever been a female actor in Bollywood who attained such glory and marvellous heights.”

He said that he and Amitabh Bachchan, another big star who had featured in films with Sridevi also, did not shoot a dance scene for their forthcoming film, ‘102 Not Out’ in tribute. Both felt it didn’t feel right.

Reports state that Sridevi’s body is expected to be flown back to her Mumbai home early tomorrow (February 26) and her funeral is likely to be conducted shortly after. Some reports state that it will be around lunchtime in India (about 4.30am in the UK)

ACV’s Suman Bhuchar looks at Sridevi’s stellar career… and below are some of the reactions of those who worked with her and knew her well.

Sridevi began as a child artist, making her appearance with Sivaji Ganesan in the Tamil language ‘Kandan Karunai’ (1967) directed by AP Nagarajan and then in the film, ‘Poombatta’ (1971), directed by BK Pottekkad – in this, she appears as a deity and her performance won her Kerala State Film Award for Best Child Artist.

It was later remade in Hindi as ‘Solva Sawan’ (‘Sixteenth Summer’) by the same director who introduced her as a heroine in Hindi cinema.

Prior to this she had also appeared as a child actor in the Hindi film, ‘Julie’ (1975), playing younger sister to Lakshmi (another South Indian actress) played the title role and it is a remake of a Malayalam film, ‘Chattakari’ (1974) about an Anglo-Indian girl who falls in love with a Hindu boy. Both the films were directed by KS Sethumadhavan.

Her career in the South Indian film industry continued as an adult and she worked with many of the top actors, and then in Hindi cinema alongside Jeetendra with whom she appeared in 19 films – including the 1983 blockbuster, ‘Himmatwalla’ that established her in Hindi cinema or Bollywood, as it is known today.

‘Himmatwalla’ meaning ‘Brave Man’ is a comedy drama directed by K Raghavendra Rao (who worked mainly in Telegu and Kannada films) and ‘Himmatwalla’ is a remake of his 1981 Telegu Drama, ‘Ooruki Monagadu’.

Other notable roles in Hindi cinema were ‘Nagina’, (1986) with Rishi Kapoor and directed by Harmesh Malhotra. She plays, ‘Rajni’ – a shape shifting snake woman and the film was the biggest blockbuster of that year.

Her dance number ‘Mein Teri Dushman’ from ‘Nagina’ is regarded as one of the best and a Bollywood classic.

Sridevi and another leading contemporary name Anil Kapoor appeared together in 14 films including the most famous, ‘Mr India’ (1987). It was directed by Shekhar Kapur (of Elizabeth fame) and written by Salim-Javed. It is a sci-fi superhero film and was the highest growing film of that year and to this day remains a cult classic.

As well as Sridevi and Anil Kapoor, it features Amrish Puri in the lead. He reprises the role of the villainous ‘Mogambo’ whose immortal line ‘Mogambo Khush Hua’ (Mogambo is Happy) is uttered even today.

Kapoor plays ‘Arun Verma’, an orphan who looks after other orphan children, until one day he discovers that his later father made a device which would make the wearer invisible.

Sridevi plays a journalist (‘Seema Soni’) who moves in as a tenant in the same house as Arun and they fall in love.

Alongside her comedy in the film with its Charlie Chaplinesque skits, she was also an incredible siren and the film is also remembered for its iconic songs – ‘Hawa Hawai’ sung by Kavita Krishnamurthy, among them.

It is played in discos even today and was redone for the Vidya Balan starrer ‘Tumhari Sulu’ last year as ‘Hawa Hawai 2.1’. Balan, whose own versatility is sometimes compared to Sridevi’s remarked simply on Twitter: “My inspiration is no more”.

Also memorable and from the same film was ‘I Love You’ sung by Kishore Kumar and Alisha Chinai, where Sridevi’s character is in a blue chiffon sari, accentuating every curve with the wind machine blowing her hair and writhing in the arms of an invisible man and getting wet in the rain. Just watching it on You Tube will give you goose bumps.

Other films with Anil Kapoor were ‘Lamhe’ (‘Moments’, 1991), a romantic drama, directed by Yash Chopra, where she played the double role of mother and daughter, both loved by the protagonist, Virendra Pratap Singh (Kapoor) leading to suggestions of incest. ‘Lamhe’ won her the Filmfare Best Actress Award and it won also the award for Best Movie.

She had earlier appeared in Chopra’s 1989 film, ‘Chandni’ where most of her costumes were in white which led to a fashion trend.

Also with Anil Kapoor she starred in ‘Roop Ki Rani Choron Ka Raja’ (‘The Queen of Beauty and The King of Thieves’, 1983) directed by Satish Kaushik and produced by her husband Boney Kapoor whom she had married in 1996.

It was one of the mostly costly films of its time, ratcheting up ₹92 million – but did not fare too well at the box office.

Sridevi could pull of a range of acting styles, from comedy to romantic to sassy and in ‘ChaalBaaz’ (1989) – the word means ‘trickster’ – she displayed such panache that critics commented that she left her male co-stars, Rajnikanth and Sunny Deol “looking like sidekicks”.

Directed by Pankaj Parashar, the film is a remake of the film, ‘Seeta Aur Geeta’ (1973), where she plays twins – one spunky, one timid and it landed her first Filmfare Award for Best Actress.

Sridevi starred alongside another Bollywood icon, Rajesh Khanna, in four films including ‘Masterji’ (1985), and ‘Nazrana’ (1987); and also opposite Amitabh Bachchan in ‘Inquilaab’ (1984) as a politician’s daughter and in ‘Khuda Gawah’ (1992).

She was reputed to have been one of the highest paid actresses of her day and it is also said Steven Spielberg wanted her to appear in ‘Jurassic Park’, but she declined.

In her personal life she was romantically linked to Mithun Chakraborty but married Boney Kapoor (older brother of actor Anil Kapoor) and the couple had two daughters, Jhanvi (Janhvi) and Khushi. Jhanvi is set to make her starring debut in ‘Dhadak’, scheduled for a July 2018 release.

After Sridevi’s marriage, she didn’t work so much, but made television appearances on popular shows, and then acted in the comedy serial, ‘Malini Iyer’ (2004/5) as the eponymous South Indian Brahmin girl who marries a Punjabi guy and brings the two cultures together.

Sridevi in the poster for her last film 'Mom'. She wowed the critics

Produced by her husband, some could argue it was real life meeting reel life.

She returned to film acting with her 2012 hit ‘English Vinglish’ (directed by Gauri Shinde) as a small-town wife, ‘Shashi Godbole’ who travels to New York to see her sister, enrols in English classes and blossoms. It was shortlisted as India’s entry for the Oscars that year. It proved an unlikely hit and she won huge plaudits in her role. She was awarded a Padma Shri in 2013, India’s fourth highest civilian award.

In 2017 she appeared in the thriller ‘Mom’ by Ravi Udyawar considered to be her 300th role and will be seen in the Shah Rukh Khan starrer, ‘Zero’ due out later this year.

She is survived by her husband, Boney Kapoor and two daughters, Jhanvi and Khishi.

One of the most fulsome tributes was from Shekhar Kapur on Instagram.

You were the most exciting actress I ever worked with. Your energy on camera was scintillating. There was not a moment on screen that you did not have the audience in your grip. Be it an emotion, a comic moment, a dance. You were so innovative. You always did far far more than I asked of you . You were never less than surprising. As a human being you were incredibly supportive of those you were close to. I remember when everyone was going at me for a film that was threatening to fall apart .. you fought for me like a tigress. You were so loyal to your Directors. It’s unbelievable that you passed. Unexpected, sudden and shocking. It shook us all. We were waiting for Mr India 2 ! Honestly .. that film should have been made by now .. It’s devastating for Boney, your daughters and your family .. I know up there you will still be looking forward to your daughters debut .. but we will never get over your presence on this Earth, Sri Devi ! #sridevi #mrindia #film

Have witnessed Sridevi's life from an adolescent teenager to the magnificeint lady she became. Her stardom was well deserved. Many happy moments with her flash through my mind including the last time I met her. Sadma's lullaby haunts me now. We'll miss her

Rajinikanth was also deeply moved by her demise.

I’m shocked and very disturbed. I’ve lost a dear friend and the industry has lost a true legend. My heart goes out to her family and friends. I feel the pain with them #RIPSridev … you will be missed.

I have no words. Condolences to everyone who loved #Sridevi . A dark day . RIP

Top Indian film critic Anupama Chopra summed up a prevailing view in much of Bollywood.

I first met #Sridevi on the sets of Chandni – she was a vision in white. But she hardly spoke. I don’t know of any other actor who transformed so completely in front of the camera. Her acting had such range & depth & power. What a loss. RIP