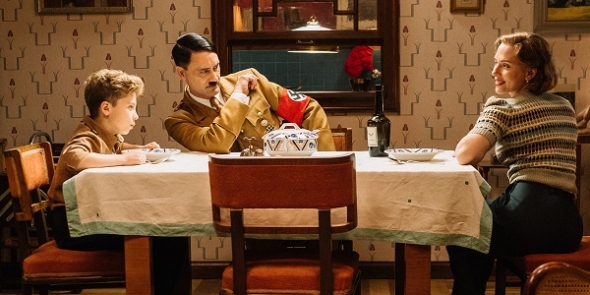 Our reviews from what we saw at the TIFF19…

Jojo Rabbit
Director: Taika Waititi
ANYONE queasy at the thought of a jokey, New Age, jaunty Hitler (played by Waititi himself) should stay well clear of this film. Maybe it’s just a film for kids…
Adapted from a book, ‘Caging Skies’ by Christine Leunens, Waititi’s idiosyncratic take on the Nazis and Hitler himself is a tough watch to start.
Waititi reduces Hitler and the Nazis to a bad phenomenon and something that made people a bit strange and dangerous.
To present Hitler with something of a jokey persona – even as a child’s imaginary friend – is a difficult feat to pull off on its own.
If you don’t live in Europe – Waititi is a New Zealander of mixed Jewish and Maori heritage – this might work from the outset and as a film to be watched on its own terms. Looks and feels a lot like a Wes Anderson creation.
It has its laughs certainly, and a great message – but it still makes for uncomfortable viewing (at times) for those who live in the shadows of rising Anti-Semitism and the march of groups in Europe that are not ashamed of their hatred of all things, other. A top performance from Roman Griffin Davis as ‘Jojo’ and an all-star cast that includes Rebel Wilson, Alfie Allen and Stephen Merchant.
ACV rating: ** ½ (out of five – might have been 3½, if Jojo’s imaginary friend had not been Hitler himself, but just another Nazi with same bad hair and moustache and crazy, idiotic ideas).

Rocks
Sarah Gavron
TOUGH and tender, director Sarah Gavron brings empathy, insight and sisterly vibes to this tale of a schoolgirl having to grow up very fast.
‘Rocks’ (Bukky Bakray) is a nickname and our central character is close to her mum and little brother. The film takes its time in establishing the characters and the plot – one fine day, Rocks discovers a note – her Mum has gone away. It isn’t clear whether this is just for a few days or something more permanent – Rocks does not know herself. Resourcefully, she manages as best as she can – helped by friends initially and then checks into a guesthouse. Likeable and determined to keep things as normal for her brother as she can, she takes the responsibility on her uneven shoulders.
Beautifully acted, it’s a tale about London and young Londoners many would appreciate, and it has power for showing black teenage girls just as themselves, not a mass media representation of them (which tends to be negative).
ACV rating: ***

Lucy in the Sky
Noah Hawley
WHAT was Natalie Portman thinking? Haha. Overheard shortly after the press screening, “men go to space and when they come back, talk about their fathers, when a woman returns home from space, she goes crazy”.
Inspired by true events, it’s actually a decent film (and produced by Reese Witherspoon) and directed by TV talent Noah Hawley (‘Fargo’) as his first effort for the big screen, it’s a study of a woman in a crisis. Lucy Cola (Natalie Portman) is a straight A student who made it from the Navy to NASA and after her first space visit, everything pales. EVERYTHING. A stumbling marriage, an alluring colleague (Jon Hamm), and a niece Lucy wants to do right by, cause her to lose her bearings. A curious sort of film that does have good moments and Portman really is hard to take your eyes away from in a role like this.
ACV rating: ***
Seen our interview with Natalie Portman and others? Psst, Jon Hamm is very good on the film.
https://youtu.be/HekwEg0fzV8

Uncut Gems
Josh and Benny Safdie
STARRING as a gem dealer in New York, Adam Sandler, playing ‘Howard Ratner’, puts in one of his most engaging and impressive performances to date.
The whole film rests on him and he infuses his character with the right kind of charm and menace you would expect of a man living on the edge and with a wife, kids, mistress and many creditors in tow.
Banking on a rare wedge of gems found in Ethiopia, he sets about settling, wheeling and dealing and making sure the women in his life are ready for the next chapter – divorce from wife (Idina Menzel and a new life with mistress ‘Julia’ {Julia Fox}). In on the gem deal is assistant Demany (Lakeith Stanfield from ‘Sorry to bother you‘) and as the dude who brings him lots of black clients, arranges a meeting with basketball icon Kevin Garnett (playing Kevin Garnett) who is transfixed with the Ethiopian gems. They make a deal. To say not all goes to plan is a bit of an understatement… Everyone is on their A-game. Watch it!
ACV rating:****
Seen our red carpet interviews?
https://youtu.be/gp7Zd7ih9eM

Motherless Brooklyn
Ed Norton
THIS project – to bring 1950s New York to life is a treat for anyone who enjoys the private investigator period drama piece.
Working from a book about a different era – the 1990s, Norton’s central character (‘Lionel Essrog’), played by himself, has Tourette’s and the nervous tics and flicks that go with it. When his sympathetic boss (Bruce Willis) dies in what was meant to be a routine ‘negotiation’ – Lionel sets about trying to find out who was behind the hit.
Opposite Gugu Mbatha-Raw (as ‘Laura Rose’) as a crusading lawyer and poor rights champion, there is chemistry and care as the two see the same enemy.
Corruption and political shenanigans loom large, it has resonances and the fine cast do the film justice. It’s a breezy, jazzy extravaganza with a hard exterior but a soft heart.
ACV rating: ***
https://youtu.be/hG3eboBt_1k

Honey Boy
Alma Hare’el
THIS was at Sundance earlier this year where it enjoyed its world premiere and made an impact.
Not hard to see why – it’s a searing tale of father and son and the showbiz life.
It is made all the more compelling by the fact that LaBeouf not only wrote but also plays the wayward father part. There’s a lot in this movie, probably way more than you expect from the publicity image which suggests it is a comedy. It’s not; it’s loosely based on LaBeouf’s own childhood and its screen depiction is messy, difficult and challenging. LaBeouf has had his personal problems – this may give some perspective on them. Bold and different – well worth seeing if you believe films only represent winners. The film is something of an ode to his Dad, but it ain’t pretty, mostly and in common parlance, he is a ‘loser’, redeemed by a son who has what it takes, in the end.
Acv rating: ***½

Reviews to come:
To come ahead of LFF: The Sky is Pink and Bombay Rose
In line with November 1 Netflix release date: ‘Bikram, Yogi, Guru, Predator’