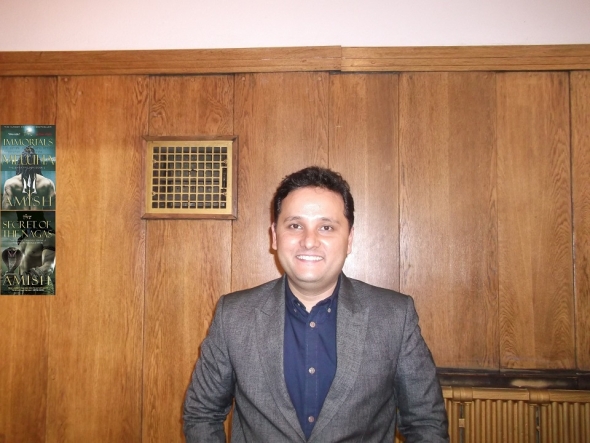 HIS BOOKS have sold in millions in his native India and he is described there as a literary ‘rock’ star.

On his very first visit to London, last month, Amish Tripathi dazzled an audience of admirers, acolytes and those who barely know him or his books – but are intrigued by the phenomenon that his books have become.

Hi ‘Shiva Trilogy’ has rewritten the rules of English language fiction publishing in India, making it less elitist and overtly intellectual, selling almost two million as a first time author (and that too self-published).

And yet the paradox is that he is a man full of ideas and philosophy, whose first book will be turned into a Bollywood blockbuster with top producer Karan Johar vowing to do ‘Lord Shiva’ justice – and speculation that superstar Hrithik Roshan will play the lead.

“Contractually, I can’t talk about that,” he told those gathered at the Conway Hall in London for his appearance at  South Asian Literature Festival (Salf) on October 29 and co-hosted by The British Council, which supports cultural exchange.

His story is remarkable for many reasons – the banker turned writer, the meticulous corporate planner who morphs into an instinctual artist, and most surprising of all, perhaps, the atheist turned believer.

“Yes, I was an atheist,” he confessed to www.asianculturevulture.com a day after his Salf talk. “ I turned into an atheist – it was something very specific in the early 1990s, as a teenager in the city that I lived in, Mumbai.

“We sadly passed through a phase of insanity at that time, there would be repeated religious riots almost every six months, with counter-riots, and bomb blasts and this was over a period of two years.

“The majority of us (Tripathi’s college friends) were Hindus but there were various other denominations as well, Christian, Muslim, Parsi, and all of us started blaming religion for these fights.”

Tripathi had been born into a very religious family, describing his father as a Pandit, a learned scholar with knowledge of ancient Hindu texts.

“My father, a very devout man, said you can’t blame religions for what a few religious extremists do and he used to tell me that the answer to this religious extremism is not atheism, but religious liberalism,” said the 39-year-old.

One might add ‘extreme’ religious liberalism – for Tripathi made the point that in India, liberalism and religion go together and are actually a condition of the country’s inherent but sometimes obfuscated pluralism.

It isn’t political in a left or right sense, but a sensibility and an accepting (even supporting) disposition towards others and their beliefs.

It didn’t (in ancient times) matter what faith (or none) you followed, so long as you were prepared to let others practise as they wished without harming anyone.

“My family were both very religious and very liberal,” Tripathi, the father who has a son of his own called Neel, explained.

“In countries like India, religious extremists are a very tiny minority – except they are very loud and he (my father) used to say that the fault is with us as religious liberals – why the hell do we keep quiet? We don’t speak loudly enough.”

Let the religious extremists speak too much and they will define the terms of a debate – something the mass media in the west continues to grapple with – but hate, professionally, makes for good copy and helps to heighten and sell stories.

“I didn’t really understand my Dad at that point when I’d turned into an atheist,” confessed Tripathi. “I was a teenager but I understand his words today, and the books kind of brought me back to faith.”

The popular appeal of these works, his first, ‘The Immortals of Meluha’ (2008),  his second, ‘The Secret of the Nagas’ and the final one in the set – which will be released in the UK in June 2014, but is already available in India – ‘The Oath of the Vayaputras‘, is that on the surface they are not particularly religious or fist-thumpingly Hindu.

In the West, these books are often stacked in the science fiction sections or adventure, which is how Tripathi later conceived his tales, having come to it first through philosophy.

Based around the myths – with more than an essence of reality contained within them believes Tripathi – surrounding the figure of Lord Shiva, he brings alive the thoughts and feelings of a group of people who lived in one of the earliest established civilisations on earth, The Indus Valley (3000BCE).

“The books began as a pure philosophical treatise which was converted into an adventure to convey that philosophy,” Tripathi disclosed.

At the talk, he said his writing was first prompted by a discussion with his wife, who is Parsi, about the nature of good and evil following a TV programme.

The words for gods and demons from a Parsi perspective were almost the mirror opposite for good and bad, as conceived by the ancient Indians.

In other words, the Parsi good was the ancient Indians’ bad and vice-versa.

Parsis is the name in India for followers of Zoroaster, who founded the faith some 3,500 years ago. Many emigrated to India and Gujarat specifically following the spread of Islam in Iran (Persia) in the 10th century.

It set Tripathi thinking, but he had never written a book before.

So, as an MBA graduate from one of the country’s leading educational institutions, the Institute of Indian Management Calcutta, now making his way in the world as a banker, he set about a plan to compose his first novel.

“I had no idea what to do, but as all MBA students are taught, you have to make a strategic plan.

“So, I made one and I read a lot of self-help books on how to be an author and about creating a structure and drawing character sketches and being disciplined – it was a super flop!”

As he began to write the story, it took on  a life of its own, and his wife, Preeti, gave him a memorable piece of advice, he revealed.

“She said: ‘Don’t approach the story with the arrogance of creator, approach it instead with the humility of a witness’.

“And: ‘The characters have a life of their own, they live in a parallel universe and you’ve been given the privilege of entering that universe and recording what you see, so go with the flow.”

It gave him the confidence to continue but once he had completed it – he faced another massive hurdle. No publisher wanted it. There were around 20 that he approached.

“They all said it was a religious book. I didn’t think it was.

“It is an adventure fiction book which happens to have some philosophy but it’s not a religious book.”

Finally, he took the plunge and published it himself, and managed full control of the whole process from design to marketing and publicity.

It’s been a stupendous success and has touched something in India and among some members of the Hindu community in the West.

That probably rests on the way Tripathi has made complex ideas accessible and intelligible to the masses, or at least to those who are curious and hungry for knowledge but are not intellectuals and don’t normally read English language fiction in India.

He writes in a very direct way and it isn’t literary, but he’s a vivid storyteller and a passionate advocate of philosophy – and not the dry academic discipline it has become.

“Not just the ancients in India, but in China, Greece, Egypt, Mesopotamia, there was an attitude that philosophy was the building block of life – that is philosophy – as in how to live.

“It was the first subject that you studied whatever you did. I strongly believe that is the way it must be. Philosophy not put into action is a waste, just words on paper – useless.”

He said writing the books has led him to important places as a person and helped him re-centre his priorities.

“I have made a 180 degree turn – I used to shout and scream a lot. Most of my career was in banking and insurance and I was one of these hyper competitive MBA banker types – we are always comparing ourselves with our batch mates, no matter how much of a bonus we get, we  always think we deserve more and that we should have a bigger office.”

At the heart of his writing and beliefs is a Hindu saying from the ‘Bhagavad Gita’, often quoted as the embodiment of Hindu philosophy.

“It is Karma Yoga,” he explained. “That is, do your Karma (duty) but be detached from the fruits of that Karma, whether it be success or failure.

“It’s been misinterpreted many times that we should be fatalist, no.

“You have to focus on what you have to do – don’t give two hoots about whether you will be successful or fail – you will become unstoppable, success will not fill pride in your head and failure will not lead to demotivation in your heart.

“You are doing your Karma because you love doing it – that’s it.

“Success is a happy by-product and if it doesn’t happen, no problem.”

He said he will continue to write but if the books don’t sell, he will go back to banking, as he has to earn a living. It’s not even a joke.

He said writing the books – not necessarily their success or impact – has changed him so much for the better.

“I can’t remember the last time I shouted…faith doesn’t provide you with miracles, but you can accept who you are and find happiness – that’s more important than anything else.”

•           Other stories from the South Asian Literature Festival http://asianculturevulture.com/portfolios/south-asian-literature-fest-an-overview-good-and-bad/