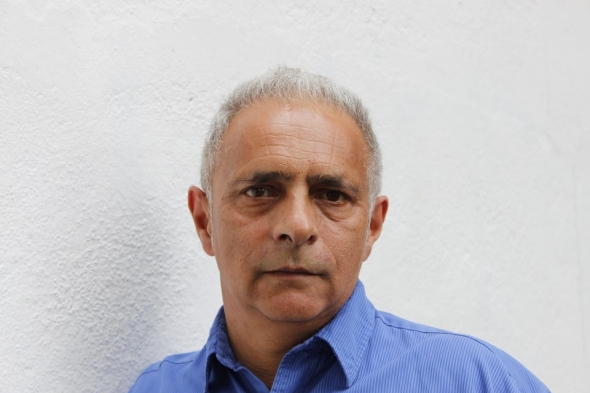 From the Buddha of Suburbia to his latest novel, Hanif Kureishi has always had something provocative to say and didn’t disappoint when he appeared at the South Bank this week…

WRITER Hanif Kureishi says he remains completely indifferent to the charge that he has fictionalised the real life encounter between Sir VS Naipaul and biographer Patrick French in his latest novel, “The Last Word”.

Kureishi said his new work primarily aimed to grapple with the big issues of life and that the concept of a young writer assessing the life of an older and grander one presented him with a great idea that he simply felt compelled to explore.

Speaking at the Purcell Room at Southbank South Bank Centre in London on Wednesday evening, the 59-year-old said he wasn’t really bothered if people mistakenly thought the book was loosely based on the real life encounters between Naipaul and his last biographer, French.

Answering a question from moderator and arts critic Maya Jaggi about the pre-publicity, Kureishi said: “I knew what everyone was going to say…well, I thought, what do I do now? Is someone going to turn up and sue…that’s the smart arse answer and then I thought I really want to write this idea, it’s about writing, it’s about ageing and it’s about marriages. I never wanted to write a picture of a particular person – why would I do that?”

In “The Last Word”, Kureishi pits Harry, a young buck of a writer, who has enjoyed some literary success with a biography of India’s first prime minister Jawaharlal Nehru, against the very venerable and much decorated novelist, Mamoon Azam.

Harry’s publisher desires an ‘extreme biography’ where every dark secret the older writer has hidden must be exposed and preferably in juicy, lurid tabloid headlines, which will also fetch wads of cash and pave the way for a best seller.

Harry admires the older writer deeply and travels to Mamoon’s English country pile to stay with him and his younger, rather dissolute wife, Liana, to write the definitive biography.

Jaggi described it as a “country house comedy”, but for an acute a writer as Kureishi, it is far more – as she later elaborated.

“This is a state of a nation novel,” Jaggi said after the audience heard Kureishi read the opening chapter from “The Last Word” at the beginning of the talk.

“There’s a sinister edge between the metropolitan world (represented by Harry) and the countryside (represented by Mamoon and all the people who live there),” suggested Jaggi.

Kureishi said he remained interested in the plight of immigrants – his novels, especially his earliest works, always had Asian characters at the centre of them, full of conflicts and neuroses and unable often to find a stable identity.

Kureishi said: “I was in Paris recently and they told me London has too many immigrants.

“I said: ‘Yes and they are all French’. You can’t hear a word of English being spoken around Shepherd’s Bush.”

Kureishi said the continuing negativity spread about immigrants by some of the mass media, both amused and worried him.

Terming it the “subversion of the undead”, he said the media had raised the spectre of Romanians coming to “take your jobs, your houses and your women”.

“It strikes me as not just being stupid but something dangerous and alienating,” he confided.

Jaggi asked Kureishi whether there were parts of him in both Harry and Mamoon.

The book explores the two writers’ loves and lusts and Jaggi asked how important it was in assessing a life. She pointed out that Mamoon had said the intellect and the libido were strongly connected.

“It’s an interesting question, isn’t it? You always want to know how much sex the other writers had. Whether it was disappointing or whether they’d had too much. You’d wonder whether that could really be the truth about that person. Where do you find the truth about the person? Who did they love and why did they love them and in what ways? Those to me seem important questions.”

With the 25th anniversary of the Fatwa against Sir Salman Rushdie looming on Friday, February 14, Jaggi asked what it meant to him.

Kureishi said it reminded him how important writing could be and while there was a tendency in the West to treat it casually, in some parts of the world such as Pakistan, it mattered considerably more.

He told the audience he had a relative there who taught post-colonial literature.

“I asked her how are you getting on with Rushdie? She said: ‘I can’t do Rushdie, if students went to the bookshop in Karachi asking for him, they would be thrown out and if the bookshop was selling Rushdie it would be burnt down’. It made me think about writers and writing and it does matter. We are complacent about it.”