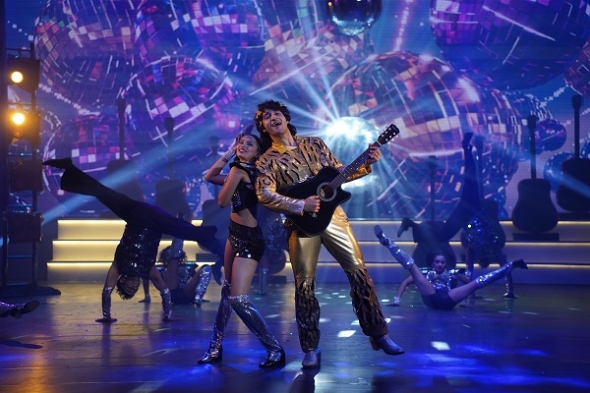 A HOMAGE to the 1982 blockbuster Bollywood film of the same name by Babbar Subash, this production has a cheesy plot, good production values with high energy disco songs and dance numbers and is a fun night out and will bring a smile to your face.

It also features comedian, Shazia Mirza as a MC narrator character who appears in between scenes to entertain the audience with her custom brand of humour delivered in that dead pan manner of hers.

Although that label ‘Bollywood’ wasn’t much used in the 1980s, the story is loosely based on the film plot, Sam Oberoi (Varun Tiwari) – thinks he’s the greatest Disco Dancer – which gives him the licence to behave badly.

He considers himself to be untouchable because his dad, Mr. Oberoi (Gautam Berde) and their henchman Bob (Zachary Coffin) – modelled on a bad Russian gangster – always protect him.
When his manager Mr David Brown (Gavin Methalaka) asks him to apologise to compere Pooja (Ana Ilmi) for his sexist behaviour, he refuses, so Mr Brown dumps him to find a replacement.
He goes to Goa and finds a sweet boy called, Jimmy (Arjun Tanwar), who arrives in Bombay and soon becomes successful.

His friend and sidekick, Anthony (Soham Joshi) provides some of the comedic relief in the story.

In a departure from the usual international Bollywood shows of recent years like – ‘Mumbai Masala’ and ‘Beyond Bollywood’, this one has live singing by its cast and on the night we went Tanwar’s radio mike was falling and the reverberation was audible – but he carried on and has a beautiful voice.

And with his dancing, he becomes a star reaching the dizzy heights of fame and sponsorship, falls in love with Kim (Tia Kar), who is Sam’s sister, and it is revealed they knew each other as kids: the backstory is beautifully illustrated through some hand drawn animation projected on stage.

‘Disco Dancer: The Musical’ is directed and choreographed by Rajeev Goswami (who was also behind ‘Beyond Bollywood’) and it has a cast of 10 actors and a dance ensemble of sixteen, with music – directed by the duo, Salim–Sulaiman.

Although having said that most of the songs are from the original film, composed by Bappi Lahiri and when the familiar numbers such as ‘Ae Oh Aa’ ‘Auva Auva’ or ‘Star Ban Gaya’ or the perennial club favourite, ‘Jimmy Aajaa’ were performed the audience responded enthusiastically.

The backdrop of the scenes are projected on stage and the lighting design by Gaurav Sharma creates a vivid Bollywood look of 1980s disco culture with lots of colours and loud bright costumes with big collars, padded shoulders, leather jackets, and gold and silver lame tassels.
Although, Mirza’s role is not integral to the story, www.asianculturevulture.com enjoyed the humorous interludes by Mirza, which ranged from absurd to edgy and she provided her own unique beginners guide to Bollywood – as if it were needed!

In one moment when Jimmy is badly beaten up by Bob and his goons, Mirza delights in telling the audience: “You probably think he’s dead, but he’s not. When you’re a mum in a Bollywood film, you’re more a hero then the hero himself and a mum ‘s prayers are stronger than Valium”. Sure enough, it works, Jimmy miraculously gets up and in this production, his mother is played by Sam Sera, a UK actor.

Most of the audience know the story, and the first act is more song and dance fun with the second having more plot development

It’s a guilty pleasure and you leave the auditorium humming, “I am a Disco Dancer”.
ACV rating: **** (out of five)