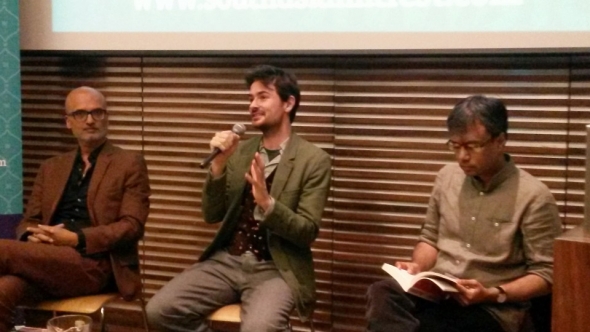 DEEP, thought-provoking and occasionally very spiky – the final talk of the South Asian Literature Festival in on Friday (November 1) did not disappoint when authors Jeet Thayil and Amit Chaudhuri removed their metaphorical gloves.

Despite being nurtured and nourished by the same city – Mumbai (or Bombay) as both authors preferred to call it, there was a contrast in delivery and tone – almost the product of two different English-speaking cultures as the two were brought together to discuss, ‘Addictive Cities’.

Thayil whose family is originally from Kerala, played music and lived in New York before turning his back on the artists’ life as it is conceived by some, and composing his first novel, ‘Narcopolis’, which was published to great acclaim and nominated for the Booker Prize last year.

Chaudhuri, also a musician, grew up in Mumbai, but his family is Bengali and he visited Calcutta often and for long periods, making his accounts of the city (in ‘The Immortals’ and ‘Calcutta’) – those both of the outsider and the inhabitant, at the same time.

A poet before being a published novelist, Thayil spoke with great power and passion on the evening, and had his audience spell-bound when he extemporised his hardly short, own 2010 poem, addressed to 19th century French literary giant, Baudelaire.

Very much the poet of the modern, and modernity, Baudelaire rather romanticised excess and aesthetic values and Thayil spoke of his own one-time enthrallment to this, and his Booker-nominated book Narcopolis, he said, was a “memorial to intoxication” and an ode to false gods.

Now more enlightened, he wants other young minds and aspiring aesthetes not to fall for the easy seductions he did or fall prey to a city, virtually dedicated to them, as was the Bombay of ‘Narcorpolis’ in the 1970s.

The poem, ‘To Baudelaire’, ends this way as he recounted…

“At times like this,
if I catch myself talking to you,
I’m always surprised at the words I hear
of regret and dumb boyish devotion.”

Both writers were scathing about the political dimensions of the city’s name being changed from Bombay to Mumbai.

It was, cursed Thayil, an act of verbal vandalism, perpetrated by those who were illiterate and ignorant of Bombay’s rich history and keen to assert an empty, meaningless (Marathi – Mumbai’s official language) nationalism.

In earlier decades, the city was probably unique to others in India, in the way that it offered migrants solace and comfort, he felt.

“Your background or religion did not make a difference – it was a democratic city in its addictive inclusiveness and acceptance,” Thayil pointed out.

While the first part of the talk was a little dry and academic and too abstract in parts, the discussion became far more lively when moderator Ted Hodgkinson from the British Council, which co-organised the talk, opened the floor to questions.

You got a richer sense of what Bombay and Calcutta meant to both authors.

Chaudhuri was especially enlightening on the rise and decline of Calcutta and its place within Bengali culture.

Its renaming for him too something that played to the politics of language more than any intrinsic idea that the city’s British heritage be officially obliterated.

“When I speak Bengali, it is Kolkata – in English it is Calcutta and it feels silly to call it Kolkata,” Chaudhuri lamented.

Hosted by the Free Word Centre, in Farringdon, London, the talk brought to a close nine official days of literary events in what was the fourth edition of South Asian Literature Festival.

A pre-festival event on October 22, involving authors Sathnam Sanghera and Damian Barr, at Asia House, in London, discussing being on the margins, growing up in the 1980s can be read here, http://asianculturevulture.com/portfolios/invisible-lives/