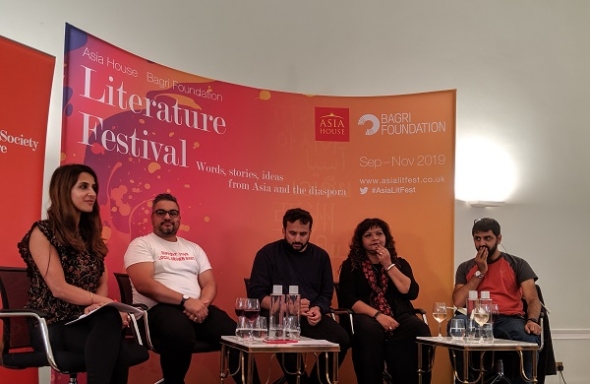 Top talent covers a lot of ground including the Booker, Brexit divisions and Dr Who…

IN A WIDE-RANGING and at times humorous debate, four prominent creatives discussed their work, successes and problems – with comedian Nish Kumar stating that white working class communities have been pitted against other minority groups in a spurious battle.

He went onto say that it is a narrative designed to create division and separation and had to be tackled.

He joked, last night (October 15), that it was not something he could say on air in the way that he told the packed Asia House London audience or fellow panellists – writers, Nikesh Shukla, Tanika Gupta and Vinay Patel.

“They would think someone’s gone serious here!” he joked, talking about his colleagues at ‘The Mash Report’.

He added: “And so the most important thing that has happened in the last 10 years is the idea that the interests of the white working-class in this country are diametrically in competition with ethnic minorities or anyone from any other background – pitting working class people against other minorities is the reason why America and Britain are in the state we are in.

“That is the most important myth that needs to be exploded.”

Gupta, who has been writing successful plays for 20 years and whose recent adaptation of Ibsen’s classic, ‘A Doll’s House’ has been widely acclaimed, talked about her adult daughter being physically attacked recently by a white man in Whitechapel, who randomly punched only Asian women.

Her daughter managed to avoid the full force of a blow and was not badly hurt – but Gupta raised the subject as an example of increasing hostility and racism.

“The Police said she was lucky – the man broke another woman’s jaw” and slightly dismissing the severity of the incident, said: “They said he was probably mentally ill.”

In response to a question, from moderator Nomia Iqbal, about how the creatives respond to negative reviews and racist ideas and beliefs sometimes contained therein – Gupta said over the years, she had noticed that some reviewers would always draw analogies or metaphors with curry.

“It wasn’t spicy enough – it’s like they have an obsession with curry,” she half-joked.

Touching on the decision to award the Booker Prize to two women on Monday (October 14) – Margaret Atwood (‘The Testaments’) and Bernardine Evaristo (‘Girl, Woman, Other’) – who became the first black woman to win the award, Gupta said: “A lot of people are asking why was it shared?”

Some feel that it would have been a powerful statement to give it to Evaristo on her own. Atwood has won many prizes and is a global literary superstar already, because her ‘The Handmaid’s Tale’ (1985) has been turned into a very successful TV franchise more recently and her Booker award winning title is the sequel.

Shukla said that in the (white) mainstream publishing world, they regarded Evaristo as being ‘obscure’.

“Obscure to whom?” he questioned. “In my circle, people know about her. She’s been writing for 20 years and is brilliant.”

Earlier, the panel discussed representation and diversity – all are champions and Shukla broke new ground when he brought authors of colour together, edited them and published the award-winning, ‘The Good Immigrant’ in 2016 to huge success – much against mainstream UK publishing’s expectations – which mostly regard authors of colour as commercially risky and difficult to market.

Iqbal highlighted Shukla’s role, saying he would take on people who often thought that like that.

“You have to invest money in diversity, if you are serious about it. It’s not good enough just to say you are diverse…”

‘The Good Immigrant‘ is a collection of essays about living and working in Britain as a person of colour. A US edition was released earlier this year.

Patel, who wrote a seminal ‘Dr Who’ episode, screened last year, featuring Partition, said it was a strange phenomena to have what at times felt like a couple of million people attacking his work.

“It’s amazing to have millions see it,” he stated – putting the number of critics in context (‘Dr Who‘ is watched by about six million viewers in the UK and many more abroad).

Many hailed it as the first time many (young) Brits would have become aware of Partition and the immense human suffering it caused.

The episode features a cross-cultural love story involving Yaz’s (Mandeep Dhillon) grandmother as they travel back in time.

“I wanted to write it from the bottom up – of ordinary people affected,” revealed Patel, eschewing the temptation to write about the politics and politicians responsible for Partition.

The panel agreed that it was important for British colonial history to be taught in schools.

Both Shukla and Patel said they would be keen to write Marvel or Star Wars, respectively – if given the opportunity. The panel said it was important writers did not feel inhibited and presume anything was off bounds.

To make the point, Kumar said: “You need to be a fan of your own work”.

Last night’s talk was supported by the Royal Society of Literature.

📚Hanif Kureishi talks about his latest book, a collection of essays, ‘What Happened?’ tomorrow… (October 17) https://www.eventbrite.co.uk/e/hanif-kureishi-what-happened-tickets-72936259315

Look out for our interview with him about his own stage adaptation of ‘My Beautiful Laundrette’ – it plays next at Birmingham Rep from November 5-9, having been staged at The Curve in Leicester last month.