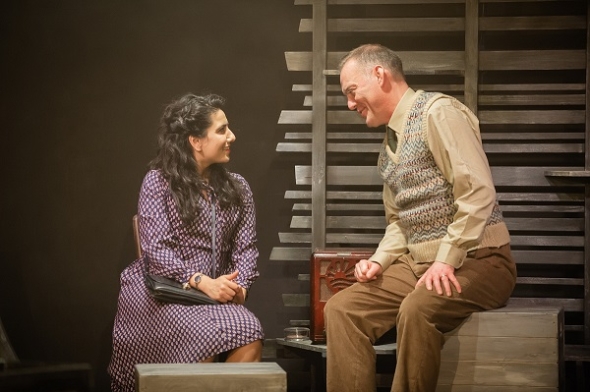 This is a new play by Azma Dar for Kali theatre company, currently on at Southwark Playhouse in London…

THIS is the story of the Second World War unsung heroine, Noor-un-Nisa Inayat Khan, who worked as a undercover wireless operator in Occupied France and gave her life for her country.

What is it about Noor, this delicate looking Indian heritage spy executed at Dachau (Germany) which has cast a spell over generations of artists and authors?

Asma Dar, the writer behind the play which opened at Southwark by Kali theatre, has spent 16 years being obsessed by the enigma that is Noor.

Variously known as Madeleine, Jean Marie, Nurse and Nora Baker and initially totally erased from the post Second World War narrative whilst being posthumously awarded the George Cross medal – the highest award a civilian can get for ‘acts of great heroism and courage in extreme danger’ – Noor’s story is as fascinating, as it is gripping and it is right that her sacrifice is finally being acknowledged.

Since the 1980s, Asian artists and the wider community have began to articulate and campaign for the name of Noor to be included in the pantheon of Second World War heroines.

A bit of brief factual information: Noor was born in Moscow on January 1, 1914 to an American mother, Ora Ray Baker (who became Ameena Begum) after marrying the Indian Sufi mystic Inayat Khan and was the eldest of four siblings. The others were her brothers, Vilayat Inayat Khan, Hidayat Inayat Khan and sister, Khair-unissa Inayat Khan.

She grew up in London, then Suresnes (near Paris), before coming back to the UK when Germany invaded France.

Although a pacifist by birth and inclination, she and her brother, Vilayat wanted to support the war to defeat Nazism and prove that as Indians they were loyal to the Allies.

In the show, Noor brilliantly directed by Poonam Brah and beautifully designed by Helen Coyston in shades of period 1940s noir and romanticism -with a soundscape of music ranging from jazz, Sufi to swing, the story is presented as a straight linear narrative, set during the last two years of her life from 1943 until her death on September 13 1944.

It begins at the moment when Noor (Annice Boparai), is recruited by Vera Atkins (Caroline Faber) into the Special Operations Executive (SOE), and then covers her time in France working as an undercover wireless operator, learning how to perfect her espionage skills and there are some funny scenes such as putting the brewed tea in first before you put milk.

Interestingly, both Noor and Atkins are seen as ‘other’ – and their loyalty or ‘otherness’ does come up in the arguments. Atkins is Jewish Romanian.

Noor features five actors performing on a traverse stage going across the auditorium with seats on both sides, shaped as a long broken train carriage.

The play’s characters are all real historical figures or drawn from composites of real people with Chris Porter as (Kieffer, the German Major who captured her in Paris), Ellie Turner (as Renee, the wanna-be spy responsible for betraying Noor) and Laurence Saunders in a double role as Buckmaster, the British head of Section F SOE and Professor, head of a cell in Paris.

The performers bring the characters alive so vividly, especially Boparai, Faber and Porter and as an audience you are swept into their world and can only weep over the futility of war.

Noor continues to remain a captivating figure and through this personification you can only say, “if only”.

This is a must see show.

Show is 1 hour 45 mins straight through no interval and unreserved seating.

Privacy & Cookies: This site uses cookies. By continuing to use this website, you agree to their use.
To find out more, including how to control cookies, see here: Cookie Policy
← VE Day: Imperial War Museum’s ‘Voices from the War’ including Daljit Nagra and popular representations of Indians in the Second World War…
Remembering Rishi Kapoor: actors Nina Wadia, Aly Khan, Bollywood music composer Pandit Dinesh and others… →