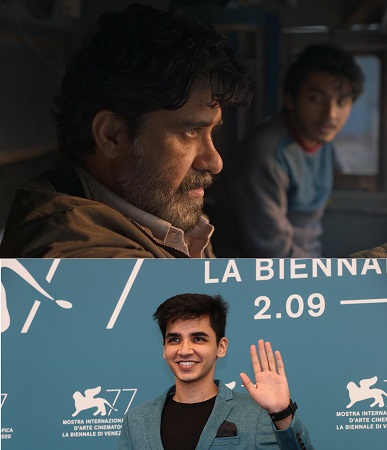 Truck drivers and two famous artists whose words are still very much with us – one who wrote ghazals in the 19th century and the other who fomented revolution in the 20th century…what is their connection…?

It screened in the Orizzonti (Horizons section) and we caught up with Ayr who could not travel to Venice to present his work, which is about an ageing truck driver in India, who is facing various challenges.

www.asianculturevulture.com (ACV): Your film is in Venice, but you are not. What happened?
Ivan Ayr (IA): What happened is, I showed the film to the Venice programmer in June, just to have some ideas, and then I got a very positive response and a letter from the selection Committee saying that I needed to finish the film as quickly as possible. All of July and August we were just slaving to get the film completed. At the beginning of the summer we did not have the right colours, sound, and we literally had to work on every frame. There was no time for me to arrange a visa or organize my trip because I barely finished the film and delivered to the festival on time.
What interested you about truck drivers? Is it a world you’re familiar with?
My initial idea was to make a film about truck drivers who work outside of India. I used to live outside of India myself – 13 years in the US. Also, in my extended family there are drivers and people who work with trucks. I heard a lot of stories from them and I wanted to explore the life of truck drivers who are immigrants in a different country and also away from home. I wondered whether they (drivers) are searching for something else or they are happy with what they are doing and what life on the road is like.

ACV: The names of your protagonists are very symbolic?
IA: I named them after two very famous Indian poets. The elder protagonist is called Ghalib after the celebrated Urdu-Persian poet Mirza Asadullah Baig Khan, and the young intern is named Pash after the revolutionary Punjabi poet, Avtar Singh Sandhu. It came probably out of pessimism as well because these names don’t hold any meaning any more.

ACV: Is this a film about a person’s usefulness in an economic system and once that is done – what else? It seems bleak…
IA: I wanted to show what life is like in an excessive capitalistic society that India is becoming. Maybe I am too pessimistic. I don’t feel I am doing this intentionally, but maybe it’s because nothing much is happening in the society that gives me optimism. At the same time the film has positive moments for example when you would observe the young boy, leaning driving a truck, who is optimistic and aspirational which conflicts with the pessimism of the older driver. However, towards the end, the experienced driver feels that he has got it all wrong. Sometimes we are too confident about our understanding of the world. There is a scene where he cannot see clearly because of the rain… I used it as a certain reference that life is not always as clear as we think it is.

ACV: In your director’s statement, it says you like to “explore individuals in modern India” (Ayr’s last film, ‘Soni’, also screened at Venice in 2017 and is about a young woman police recruit from a working-class background) but this modern India is not one we see in much of Indian cinema…
IA: Modernity is relative, it very strongly depends on a class. For the working class being modern means just to have an apartment, a mobile phone and to work in a capitalistic system. Even-though I am showing life in Delhi, my story is set in the outskirts of the city, in an industrial zone, where the whole industry takes place and makes civilised life in Indian cities possible.

Privacy & Cookies: This site uses cookies. By continuing to use this website, you agree to their use.
To find out more, including how to control cookies, see here: Cookie Policy
← Venice 2021 (wrap): Awards for ‘Happening’; Penelope Cruz; Jane Campion, Maggie Gyllenhaal, Erik Matti; John Arcilla and Paolo Sorrentino’s ‘The Hand of God’ among others…
Venice 2021 (video): Bengali star actor Sreelekha Mitra – “Sometimes a woman can manipulate a man and if she wants it to be physical, it’s her choice” →