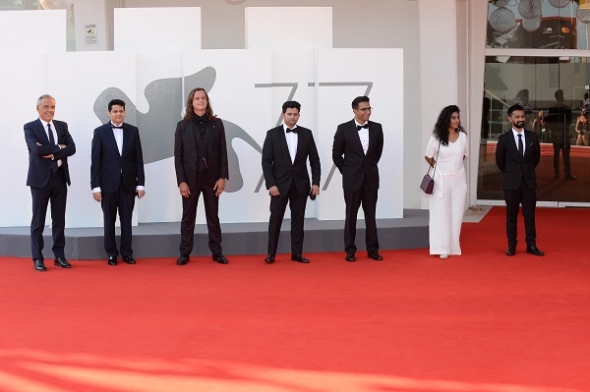 🎥 Another film from India, ‘Meel Patthar’ (‘Milestone’) also had its world premiere at Venice in the Orizzonti (Horizons) section and interview with director Ivan Ayr coming…

CHAITANYA TAMHANE – the young director behind the Indian film, ‘The Disciple’ is basking in the glory of a Venice Film Festival award and a prestigious international critics’ badge of approval too.

Tamhane’s film was the first Indian film to feature in the competition section of a major European international film festival since Mira Nair’s ‘Monsoon Wedding’ won the Golden Lion – the festival’s top prize in 2001.

At Saturday’s (September 12) closing ceremony and awards, Tamhane and his film, ‘The Disciple’ was presented with the best screenplay award at the festival.

The film was also given the FIPRESCI award – chosen by a group of international critics on the day before (September 11).

‘The Disciple’ is still looking for distribution and Tamhane, 33, told the Mumbai Mirror (see link below) today that they are talking to interested parties, both about a possible online and theatrical release. Cinemas in India remain closed due to the pandemic.

He told the tabloid the win was “special” – his previous film, ‘Court’ (2014) also had its world premiere in Venice and won two awards there – see our Venice preview.

He has received a round of plaudits from the Indian film industry with Richa Chadha, Manoj Bajpayee, Varun Grover, Ali Fazala and Anurag Kashyap among those all expressing their admiration and pride via social media.

Earlier reacting to his award from the Federation Internationale de la Presse Cinamatographique – Fipresci – he said this award touched him because of its reach, representing critics from the around the world.

The last Indian film to be given a FIPRESCI was ‘Mathilukal’ by Adoor Gopalakrishnan in 1990.

Taking home the top prize, The Golden Lion this year, is a film by Chloé Zhao and starring Frances McDormand as a widow who takes to a camper van to eke out a living in the American northwest.

Russian Andrei Konchalovsky took home the special jury prize for ‘Dorogie Tovarishchi!’ (‘Dear Comrades’). The best actress prize went to Vanessa Kirby in ‘Pieces of a Woman’ by Kornel Mundruczó. Pierfrancesco Favino won the best actor prize for Padrenostro by Italian Claudio Noce. In the best young category Rouhollah Zamani won for ‘Korshid’ (‘Sun Children’) by Majid Majidi. He made ‘Beyond the Clouds’ with Ishan Khatter two years ago.

The top winner in the Orizzonti section is ‘Dashte Khamoush’ (‘The Wasteland’) by fellow Iranian Ahmad Bahrami. (For the full list, see below)

Venice went ahead pretty much as normal, but practised social distancing and took other measures to prevent the spread of the coronavirus.

Tamhane travelled to Venice from India and had to comply with regulations – he took Covid-19 tests before leaving India and on arrival in Italy.

You can read more about the film and its making in our Venice interview. Oscar winner Alfonso Cuaron is an executive producer. (See the link below for more).