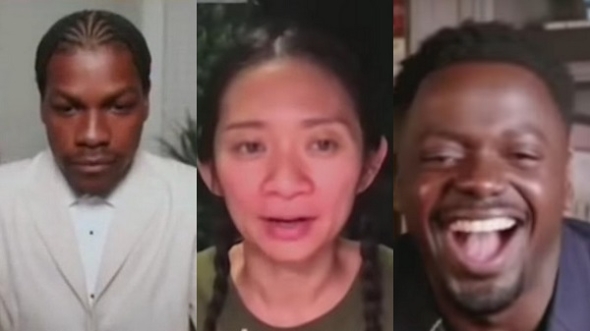 Britons did well as awards season gets underway…

THERE was joy for British stars John Boyega and Daniel Kaluuya as the Golden Globes were presented last night in a virtual ceremony.

Chadwick Boseman, who sadly died from cancer last year, was also presented with a Golden Globe posthumously for his role in the drama, ‘Ma Rainey’s Black Bottom’, available on Netflix currently.

His wife, Taylor Simone, accepted the award in a short but powerful acceptance speech, saying her late husband would thank “his parents, and his ancestors for their guidance and their sacrifices”.

The Globes organised by the Hollywood Foreign Press Association came under fire for having no black journalists. It has 87 members and while there are journalists from Asia and Latin America, none are black – and several winners drew attention to this last night.

Director Chloé Zhao made history as the first Asian woman – and is only the second woman – to win the Best Director prize for her film, ‘Nomadland’. Barbra Streisand won previously in 1992 for ‘The Prince of Tides’.

China-born Zhao said: “I fell in love with making movies and telling stories because it gave us a chance to laugh and cry together, to learn from each other and to have more compassion for each other.”

A festival favourite, it charts the experiences of Fern, played by two-time Oscar winner Frances McDormand who travels around the US in a campervan after economic and personal tragedy.

Boyega won in the Best Supporting Actor in a Series, limited Series or TV movie for his role in the BBC’s Small Axe set of films. There were five films in the series that screened on the BBC last year is directed by Steve McQueen. www.asianculturevulture.com reviewed them all and carried interviews with two of the writers who helped to make the film – Courttia Newland and Alex Wheatle.

‘Star Wars’ icon Boyega featured prominently in the episode entitled ‘Red, White and Blue’ and based on the experiences of the first black police officer in London, Leroy Logan. It was written by Newland.

Kaluuya won for the Best Supporting Actor in Any Motion Picture for his role in the film, ‘Judas and the Black Messiah’, which is a period drama about the US Black Panther Party being infiltrated by an FBI agent. Kaluuya plays Fred Hampton, the chairman of the Black Panther Party and who was shot in 1969.

On receiving the Golden Globe Kaluuya said he hoped people would be inspired by Hampton’s example and that he had learnt much from the character. ‘Sorry to Bother You’ star Lakeith Stanfield plays the FBI agent.

There was praise for Kaluuya from Boyega himself on his Instagram.

He praised the star, calling him “King Kaluuya” and saying he waited for him outside the green room to talk to him when Kaluuya appeared in ‘Sucker Punch’, a Roy Williams play about two black boxers looking back at their careers.

There were also top awards for Netflix’s ‘The Crown’ about The Royal Family, with British actors Emma Corrin (Princess Diana) and Josh O’Connor (Prince Charles) winning in their respective Best Actor in a Drama series categories. It also won the in the Best TV series category, while Gillian Anderson (as the late Prime Minister Margaret Thatcher) triumphed in the Best Supporting Actress in the TV series drama category.

Andra Day won in the category Best Actress in a Motion Picture – Drama for her portrayal of the legendary singer Billie Holiday in ‘The United States Vs Billie Holiday’, directed by Lee Daniels.

Sacha Baron Cohen won big for his ‘Borat Subsequent Moviefilm’ – in which he travels America under President Trump in mockumentary style in character, as the buffonish Kazakhstan broadcast journalist with his fictional daughter, played by Maria Bakalova and getting into all sorts of weird and unusual scrapes.

Cohen was one of those who commented on the organisers’ lack of diversity.

“Thank you to all-white Hollywood Foreign Press,” he joked.

The 95-minute film dropped on Amazon Prime late last year is a sequel to a similar film in 2006.

Briton Rosamund Pike won in the Best Actress Category in a Musical or Comedy Film for ‘I Care a Lot’. This is a drama about an unscrupulous legal guardian who is looking after herself and not her elderly charges and then meets her match.

Icon Jane Fonda was presented with the Cecil B D Mille Award for her lifelong contribution to the film industry, winning seven Golden Globes, garnering 15 nominations and her work on the environment and civil rights.

Some commentators see the Golden Globes as an indicator for what might happen at the Oscars which will be held on April 25 this year. There were nominations at the Golden Globes for both Riz Ahmed and Dev Patel.

Ahmed was nominated in the Best Actor category for a Motion Picture for his role in ‘Sound of Metal’ which has been getting rave reviews and is widely tipped to be on the Oscars list. The main awards shortlist will be released on Monday, March 15.

Dev Patel was nominated for his leading part in the Armando Iannucci film, ‘The Personal History of David Copperfield’ and appeare in the the Best Actor in a Motion Picture – Musical or Comedy section.

www.asianculturevulture.com saw both films at their World Premieres at the Toronto International Film Festival in 2019.

‘Sound of Metal’ is a powerful film about heavy metal drummer, Ruben losing his hearing and trying to adjust to the consequences. Ahmed gives a pitch perfect performance.

Iannuci’s film, a take on the Charles Dickens’ classic is a beautiful ode to Britain but told with a contemporary and colour-blind eye, and has many characters played by Brits of diverse heritage.

Both films were very impressive and both stars shared their thoughts with acv on the red carpet before their first ever public viewing (see below).

Riz Ahmed and ‘The Sound of Metal’.

See the review for ‘The Personal History of David Copperfield’

‘The Personal History of David Copperfield’ at TIFF

At the British Independent Film Awards 2020

*Ahmed and his co-written film, ‘Mogul Mowgli’ fared far better at the British Independent Film Awards (BIFA) hosted las month, winning Best Debut Screenwriter, and Best Music for composer Paul Corley. Ahmed also got an a Best British Short Award for his Youtube film, ‘The Long Goodbye’, directed by rising star Aneil Karia.
Ahmed said on getting his BIFA: “It is a real honour, it means the world much to me, because British independent film as a culture and as an industry is one where we continue to take risks and redefine what Britain really is…” and he sent a shoutout to his co-writer Bassam Tariq.
The big winner on February 18 was ‘Rocks’ which won in five categories, including Best Film and Best Actress and Best Newcomer for Kosar Ali.
ACV saw the film at its world premiere at TIFF in 2019.
The film is centred around the character of Shola ‘Rocks’ Omotoso (Bukky Bakray) who is abandoned by her mother suddenly and has to continue her schooling and looking after her young brother and how this affects her relationships at school in London and especially with her best friend, Sumaya, played by Ali.
Directed by Sarah Gavron (‘Brick Lane’) it is both a tender and tough tale of survival in London for a person who is not an adult but has such responsibility thrust upon her.
See the review here.