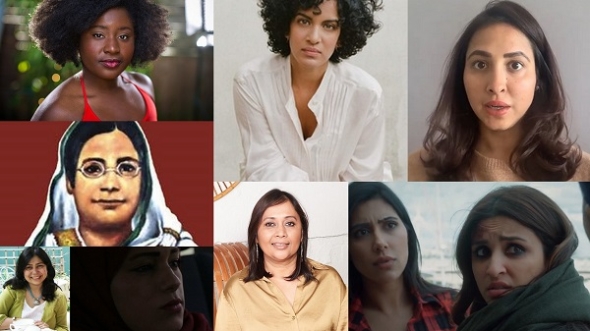 CONTINUING its 21-day long celebration of Women is the Women of the World (WOW) Foundation.
It has a day-long speical programme of online events on Monday, including a performance by Anoushka Shankar (pictured right) in the evening.
One of the major talks on Monday will be ‘Women, Power and Change’ and it will look at how countries led by women tended to have done better facing the challenges of the global pandemic crisis and why more women aren’t in politics. Julia Gillard, one-time Prime Minister of Australia will join Mandu Reid, the first black leader of the UK Women’s Equality Party and others to talk about the issues with WOW founder Jude Kelly.
This is followed by a chat with broadcaster Sandi Toksvig about her latest book which looks back at 2020.
Earlier in the day there will be contributions from women in Bangladesh, Nepal and Pakistan among others (see the link below for the full programme).
Originally set up as a festival celebrating women and created by former Southbank Centre chief executive Jude Kelly, WoW has grown into a worldwide organisation that pushes for gender equality globally. The Wow online festival started on March 1 and ends on March 21.
Listing: Monday (March 8) From 9am – Women, Power and Change talk at 8pm-9pm (£1-5) GMT https://wow.ticketco.events/uk/en/e/women_power_and_change
Day programme from 9am GMT: https://thewowfoundation.com/events/iwd-at-wow

Calling women behind the camera…

TALKING about women in film and marking International Women’s Day will the UK Asian Film Festival (UKAFF) on Wednesday (March 10.)
The festival’s regular monthly film club (Filmwallah) will meet online to talk about the challenges of being a South Asian woman filmmaker – the club last discussed the BBC programme, ‘Death in Bollywood’, about Jiah Khan.
More details about the Women in Film talk will be released shortly on the festival’s social media channels.
The festival has also announced its dates for annual festival screenings from May 26 to June 6.
UKAFF (formerly Tongues on Fire) is also hosting a mental health conference on Saturday March 20. It launched a talk helpline for creatives shortly after the first lockdown last year – and is still available on 07930 491915
Listing: For programme details about the Women Filmmaker talk click https://www.instagram.com/ukasianfilmfestival/

MARKING the contribution of a leading 20th century feminist Bengali poet, Begum Rokeya (pictured right), are a number of cultural groups which have come together to celebrate her unique voice in a day of online activities on Sunday (March 7).
There will be talks, readings, music and an awards segment honouring three women for their role in elevating women and fighting for gender rights.
The awardees are Geeta Upadhyya OBE, co-founder of culture organisation, Kala Sangam; Indian Kathak dancer Nayanika Ghosh Chowdhury who is battling cancer; and Salma Khaled, the wife of celebrated Bangladesh military liberation leader Khaled Mosharraf Bir Uttom.
Among the speakers are Dr Dipu Moni, Bangladesh education minister, well-known journalist and filmmaker Gita Seghal and academics both from Britain and Bangladesh.
Among the musicians performing will be British Iranian Niknaz Mirghalami, Supriya Nagarajan, Sumana Malik Basu and several others.
Rokeya (1880-1932) is regarded as one of the pioneering voices of feminism in South Asia and set up one of the first schools for girls in Kolkata in 1909; as well writing essays and penning a celebrated novel about a fictional country ruled by women ‘Padmarag’ (1924), Bangladesh recognises her achievements with Rokeya Day on December 9, conferring annual awards on women who have excelled.
The day has been organised by The Gronthee, a UK based South Asian literary platform, Saudha, Society of poetry and Indian music and La Ninfa Eco, a British-Argentine literary magazine.
Listing: You can follow the celebration from 2pm from Saudha’s Facebook page https://www.facebook.com/groups/saudha/

LAUNCHING this month, is Tara Arts’ Tara Table Talk – which will start with the conversation – ‘Unconscious? Exploring Bias in UK Theatre’.
Charing the discussion will be Anu Giri, a trustee and BFI executive with acclaimed author Dr Pragya Agarwal (pictured right), author of ‘Sway: Unravelling Unconscious Bias’ and Anne McNulty, freelance casting director and once of the London’s Donmar Warehouse and Yasmin Wilde, an experienced actor, writer and singer.
Listing/Tickets/more: Thursday (March 11), 7.30pm Free online but register with EventBrite https://www.eventbrite.co.uk/e/tara-table-talk-unconscious-exploring-bias-in-uk-theatre-tickets-128501522513

CATCH Kali’s first Winter Solos – the theatre group has just released ‘Exposed’ featuring Sheena Bhattessa (pictured right) in a near short monologue.
Written by Martha Pothen, it’s a piece about lockdown, heartbreak and betrayal and directed by Natasha Kathi-Chandra.
All three women are established talents – Pothen has a career as an actor, as well and has appeared in ITV’s hit series, ‘Cold Feet’ and on the stage in ‘The Visit’ at the National Theatre.
Bhattessa voices the character of Zakira in the ‘Paddington’ series and has appeared in many TV dramas and on the stage in high profile productions, while Kathi Chandra has assistant directed on plays at The National, The Royal Court and Theatre Royal Stratford East and has her own talk show, ‘In a Nutshell with Natasha Kathi-Chandra’, available on Rangmunch TV, a Youtube channel.
Listing: Watch Exposed: https://youtu.be/81ueoMNrFGM

On board and going places…

PROMINENT in the opening scenes of Netflix Hindi version of ‘The Girl on the Train’ starring Parineeti Chopra is British actor Nisha Aaliya.
“I play the role of Piya, the best friend of the Parineeti character” Aaliya told www.asianculturevulture.com. “It was a great experience being in those scenes.”
Shot in the UK, the Netflix Hindi version got the big sell and is reported as trending on the streaming platform, dropping last week.
Theatre-trained Aaliya is based in London and is of Indian Burmese descent.
“Yeah, my Hindi’s ok,” chuckled the modest London-based Dutch born actor.
Her previous feature film cast credits include appearing in a pivotal scene in ‘Shakuntala Devi’ alongside Bollywood icon Vidya Balan and acv readers may remember her as the lead in the big touring production, ‘Bring on the Bollywood’. She also has an impressive list of appearances in mainstream ads for Deliveroo to Google Pixel. Expect to see more of her on the big screen soon and Aaliya telling us about it!
Listing: Netflix https://www.netflix.com/gb/title/81144153

AUTHOR and journalist Shrabani Basu (pictured right) has just released her latest book,‘The Mystery of the Parsee Lawyer’. It is about the curious case of George Edalji, who because of his dark skin and Parsi convert father was almost certainly wrongly convicted of crimes he did not commit.
What precisely were his motives for maiming a horse in a village called Wyrley, near Birmingham, and threatening his own father – the local vicar who had married an English woman – with cryptic and increasingly violent warnings about further violence – was a mystery to all but Captain Anson, the Staffordshire Chief Constable, during the late 1890s. He framed Edalji for these crimes which were more likely to have been the work of an aggrieved local butcher who also had racist feelings towards the Indian origin family.
Edalji, a small town solicitor, was jailed for seven years thanks to Anson, but on his release managed to pique the interest of Sir Arthur Conan Doyle, the man behind the literary Sherlock Holmes. Doyle championed Edalji in an attempt to clear the brown man’s name.
Basu looks at a cache of new papers that show how Anson and Doyle slugged it out and in doing so how Edwardian Britain viewed men (and women) of colour.
‘The Mystery of the Parsee Lawyer’ by Shrabani Basu was released yesterday (March 4) https://www.bloomsbury.com/uk/the-mystery-of-the-parsee-lawyer-9781526615282/

TWO new plays will premiere on Monday (March 8) as part of The Old Vic’s celebration of International Womens’ Day.
Screened as part of Your Old Vic programme they will be available from the theatre’s Youtube channel (see below for link).
These two monologue plays star Susan Wokoma in ‘Putting A Face On’ and Jade Anouka will appear n ‘Aisha (the black album)’. Both are new commissions written by Kiri Pritchard-McLean and she directed ‘Putting A Face On’, while Tinuka Craig will direct ‘Aisha’.
The former is primarily about ‘gaslighting’ – where one person seeks to sow doubts in another so as to lower their self-esteem, making them easier to control and manipulate.
‘Aisha’ traces the history of women voting in the US, the recent inauguration of Kamala Harris as vice president of the US and the history of black women’s political power through the ages to Black Lives Matter and beyond.
Pritchard-McLean said: “The support from the theatre has allowed me to articulate my thoughts and fears about this bizarre period into this monologue. Don’t worry, there is jokes.” Listing: See here – https://www.youtube.com/user/OldVicTheatre

SCREENING as part of International Womens’ Day for free is the documentary, ‘What Walaa Wants’ which will be available through Monday (March 8) and Tuesday (March 9).
The film covers the journey of Walaa, a 15-year-old girl who wants to become a member of the Palestinian Security Force and has to face many obstacles in her ambition.
The film look at Walaa’s six-year journey from 15 onwards and the screening is followed by a Q&A with director Christy Garland and hosted by Palestinian photographer and filmmaker Kholoud Al-Jarma.
It is screened by Bertha Dochouse, a London cinema which specialises in documentaries and has online offerings currently.
Listing: From 7pm GMT see March 8-March 9 (11.59pm)
Eventbrite (UK only and in conjunction with Leeds Palestinian Film Festival). https://www.eventbrite.com/e/international-womens-day-what-walaa-wants-qa-tickets-141750785415?aff=DocHouseWebsite

Bangladeshi women in the public eye…

A GROUP OF Bangladeshi origin professionals are hosting a Womens Day conference on Sunday (March 7) marking International Womens Day.
Organised by the Women For Equality & Respect (Wer) group, the conference is being broadcast on a TV network’s Facebook page.
Among the speakers is author Shahida Rahman and Nutun Huq Ahmed, sister of Rupa Huq, the MP Ealing Central and Acton and a host of other professional women of Bangladeshi origin from solicitors to doctors, and architects to academics.
Piya Mayenin (pictured right), current chair for Wer, said she is keen for professional women in the community to raise the profile and discuss common issues.
Listing: From 8pm here Facebook https://www.facebook.com/ARTVN.TV/

All times are GMT.