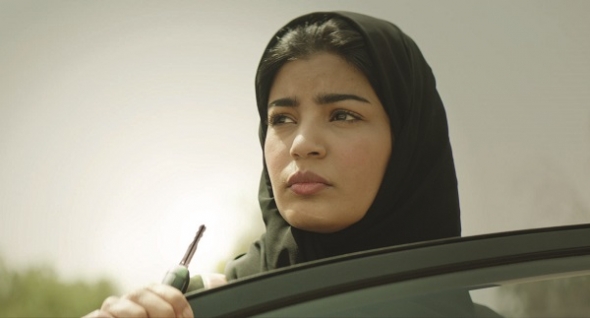 Undoubtedly one of the festival’s most popular choices…

ONE OF THE MANY highlights of the BFI London Film Festival was ‘The Perfect Candidate’, a film by the Saudi Arabian film-maker, Haifaa Al Mansour, shown in the Official Competition section and is now the Kingdom’s nomination for the Oscars 2020.

The story centres around Dr Miriam (Mila Al Zahrani) who works in an emergency room of a hospital in a small suburb somewhere in Saudi Arabia – the town is never named and everyday she has to negotiate a water logged path into work which is even more dangerous for the emergency ambulances.

She dreams of getting a better job in Riyadh but then life takes an unexpected turn. While at the airport to go to a conference in Dubai, she learns that her paper travel permit is no longer accepted and she needs a new one.

Dad is not around so the only ‘mahraam’ male guardian she can think of is a distant relative called Rashid, so off she goes to find him. He works in a local office and thinks she’s come to sign up to stand for the local municipal council, which she ends up doing.

On the way we observe a culture in transition and the difficulties women face doing even the smallest things and while Al Mansour shows us all of them, she never labours it on. There is the injured man who won’t let her examine him and refuses to meet her eyes. There are segregated wedding parties with separate entrances, and how she as a political candidate cannot address male voters directly.

We peer into the family life of Dr Miriam who is one of three sisters. Her other siblings are Selma (Dhay) — a videographer who films weddings hosted by a fabulous Grace Jones type presenter, Khadeeja (Khadeeja Mua’th) who sings live. Selma has the best dry lines, while younger sister, Sara wants to live a quiet life.

Their grieving father, AbdulAziz (Khalid Abdulraheem), earns his livelihood teaching music to a young student – is a musician dreaming of a tour.

Al Mansour shows us all the contradictions of life in this gently political film such as seeing all the men going travelling on a bus touring around the Kingdom playing oud and other percussion instruments at ‘Men Only’ concerts.

At one outdoor village square, there are only three males in the audience, while, at another all the men are moving to the music and the country’s cultural minister is out talent spotting as the Kingdom wants to form a national band.

Producers Gerhard Meixner and Roman Paul of Razor Film Production were at the London Film Festival and responded to a post screening Q&A.

The duo explained that the film was supported by the Saudi Film Commission- and film-making was much easier now then it was in 2012 when they filmed, ‘Wadjda’ (the debut film by Al Mansour which was also at London Film Festival that year). Subtle changes have been occurring in the country as it also lifted a ban on cinemas last year when it showed the film, ‘Black Panther’.

The film also features a lot of traditional music, which is making a public comeback and this was very “important to the film-maker whose father was a poet” and the singing scenes were shot live in the street.

Written by Al-Mansour and her husband, Brad Niemann and a great score by Volker Bertelsmann, the film with its fine performances and dry humour gives a great insight into the everyday lives of ordinary people in a country which is little known to outsiders as it is only since September 27 that Saudi Arabia announced it would issue tourist visas for travellers from 49 countries.

The Perfect Candidate has been picked up by Modern Films and will be released in the UK on 13 March 2020.