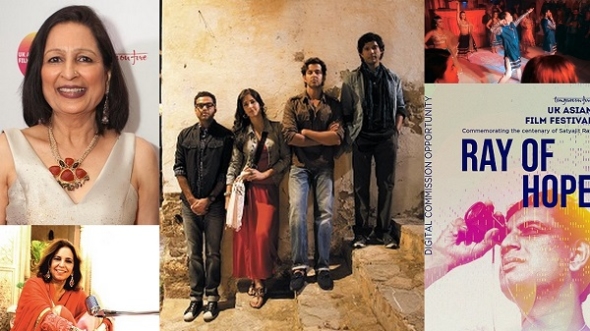 IT’S SUMMER and while there’s not too much of a tradition in the UK of watching films from your car – all that could change.

Certainly, if ticket sales to the UK Asian Film Festival’s (UKAFF) first drive in-movie this Friday (July 10) and Saturday are anything to go by – it sold out very quickly.

The screening of ‘Zindagi Na Milega Dobara’ (2011) at Ponsbourne Park in Hertfordshire in partnership with Bollywood Company is a first for the festival in its 22 years and has been carefully thought through by Dr Pushpinder Chowdhry, the founder of the festival, as Tongues on Fire and its present director.

“We’re only having 50 cars and it was just supposed to be a Saturday night, but tickets sold out and we’ve added a Friday.

“We are social beings, and entertainment is such a big part of our lives, so when the opportunity came up for us to do this we started looking into it,” explained Dr Chowdhry to www.asianculturevulture.com

She said UKAFF would not have been able to do it without the support and backing of the Bollywood Company and others who have experience of putting on outdoor screenings. There will be entertainment and food and drink to pre-order.

The film, directed by Zoya Akhtar, was a considerable critical and commercial success and played outside India well. About three male friends on an elongated stag do – who go on a road trip around Spain, it also has a plethora of Bollywood stars in it – Hrithik Roshan, Katrina Kaif, Abhay Deol, Farhan Akhtar and Kalki Koechlin.

The Drive-in heralds a busy period of activity for UKAFF as it adapts to the changing environment, in these Covid times. The festival would have run from March 25-April 5, this year but the Government effectively pulled the plug on anything and everything with the lockdown just two days earlier.

“We’ve been super busy over Covid, we want to keep our audience for the next festival,” Dr Chowdry said.

She also told ACV there may be a return for the festival to Wembley Park and free open-air screenings there. Last year UKAFF held a popular summer programme.

And not everything is centred around films either – a counselling service for creatives launched during the pandemic has been hugely popular and leans on Dr Chowdhry’s experience as a psychotherapist.

“It’s quite amazing the number of people who have been ringing – some just want a one-off chat, others we are providing ongoing help.”

She said UKAFF hopes to organise a Zoom chat where creatives and mental health experts can share their knowledge and experiences.

“We’ve been dealing mainly with people in the media, film and the arts and what is coming out generally is a fear of the unknown.

“This is not like breaking your arm, where you have a plaster put on it and everyone knows what to do. Everything looks normal out there but it’s not – and it’s getting your head around that.”

UKAFF is also entering the world of ‘Mushaira’ – an Urdu word that in modern parlance could be slightly mischievously termed, a poetry slam – if rather more refined in terms of etiquette and social conventions. It will also be digital and an afternoon affair. Hosted by well-known singer, lyricist and poet Minu Bakshi – who also happens to be the UKAFF chairperson – five competition winners will present their work in English, Urdu, Assamese, Punjabi and Hindi this Sunday. (See the link below for more).

There will also be continuing directors’ chair interviews with those whose films had been selected for 2020, and will now talk about their work digitally.

Next Saturday (July 18) sees a Q&A with Singapore-based Shilpa Krishnan Shukla. She spoke to acv just ahead of her online world premiere Covid film ‘Dots’ and you can watch her ground-breaking film anthology of eight stories in eight different languages, ‘Kathaah@8’ for a limited period free on Youtube. (See link below).

There are other director chairs in the pipeline for the films, ‘14th Feb and beyond’ (a documentary), ‘Sons and Fathers’ and ‘Made in Bangladesh’. There are also features available new to the website, ‘Axone’ and ‘The Last of the Varanasi Weavers’.

Earlier this year, UKAFF launched its ‘Ray of Hope’ competition celebrating the birth centenary of the great Indian director, Satyajit Ray, and inviting submissions to be commissioned. Nine successful filmmakers are now in the process of making their work.

UKAFF also continues to run its weekly Antakshari classes – this is a form of singing in Hindi where one person takes up a song based on the final lyrics of the previous singer. It’s proved very popular with those suffering from isolation, said UKAFF.