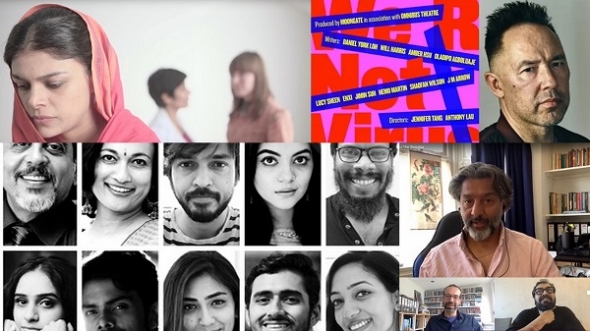 Are you missing the festival experience? Want a chance to watch a film with others and then pose the cast and crew some questions…
Shilpa Krishnan Shukla’s film, ‘Dots’ is getting a world premiere on Saturday (June 13) and is being supported by the UK Asian Film Festival (UKAFF, formerly Tongues on Fire).
While the film is ‘sold out’ currently, as UKAFF festivalgoers snapped up spaces, you can still see the film made during – and as a response to – the Covid-19 Lockdown – and watch the filmmakers answer questions.
Written in April by Krishnan (pictured) and assembled by her as the director living in Singapore, the film depicts five sets of people meeting online for the first time.
There’s a range of characters and experiences and not all of them are looking for romance. There are some distinctly bumpy encounters.
All the 10 actors (pictured above) – seven from India and the remainder from Singapore – are professionals and the film has been put together by Shukla and four others as part of her production team.

The characters speak in a mixture of English, Malayalam and Hindi and are based either in India or Singapore and all find themselves in lockdown, just as all are in real life too – before restrictions eased in India. Some of the actors are well-known in the respective language cinema.
Shukla – who is an award-winning short filmmaker, has also completed two features, and has participated in several festivals, told www.asianculturevulture.com, speaking from Singapore this week: “We really wanted to recreate the festival experience – all the cast and crew will be available after the premiere to answer questions.
“I wanted to see how we could work during these lockdown conditions and I got in touch with all the actors who responded to the challenge.
“We were supposed to be coming to London for UKAFF with our feature, ‘Kathaah@8’.”
That film is also multi-lingual and believed to be the first film of its kind – in having eight different Indian languages in it. UKAFF has plans to screen it.
Shukla, married and the mother of a seven-year-old daughter, moved to Singapore from her native Kerala in India, some years ago and continues to work in marketing for a pharmaceutical firm in Singapore.
To catch the premiere at 1.30pm (British Summer Time); 9.30am (Eastern Standard Time) and 6pm (Indian Standard Time) on Saturday (June 13) tune into this Youtube channel – http://www.youtube.com/akathaahproduction

Dropping onto the London Indian Film Festival channels this week is the interview with Anurag Kashayap (pictured right), one of India’s best-known independent filmmakers.
He talks to The Guardian newspaper’s Steve Rose (pictured left) about his latest film, ‘Choked’ – see last week’s acvlockdownlistings. The director also discusses ahis prolific career and points out he and LIFF go back a way – who remembers ‘That Girl in Yellow Boots’ screening long before he became a near household name in India?
He attended the festival last year and spoke very frankly about the demons that have plagued him.
To see this interview, you will need to register and it is part of LIFF’s ongoing initiatives to keep the festival active over this summer. Find it here – under ‘At Home Conversations‘ – https://www.londonindianfilmfestival.co.uk/

IT was hugely controversial and a peek into an almost secret world and now you have a chance to see online, ‘Made In India’ – a play about the surrogacy industry in India.
Though later laws banned the practice of commercial surrogacy in 2015 in India, it had been a more than a decade-old industry and thousands of babies had been born and delivered to western couples via Indian mothers before that.
British playwright Satinder Chohan’s play developed by Tamasha Theatre and staged at Soho Theatre in 2017 is a three-hander with memorable characters. ‘Dr Gupta’ is the Indian fertility clinic owner; ‘Eva’ is the English client, desperate to have a child, as she enters her 40s, and bring the toddler up on her own, while ‘Aditi’ is the impoverished villager hiring out her womb.
It isn’t a smooth process as these three different worlds collide and the fallout makes for powerful drama. Directed by Katie Posner, it was brought to the stage by Tamasha, The Belgrade Theatre in association with Pilot Theatre.
You can see ‘Made in India’ from Tuesday (June 16) to June 30.
Watch on Youtube here – https://www.youtube.com/watch?v=HhG62Nxk-vY

One of the terrible social consequences of the coronavirus crisis in the UK has been the rise in racism towards people of Chinese and East and South East Asian origin.
Physical attacks on people of this heritage in the UK increased 21 per cent between January and March of this year.
A collective of leading actors, writers, directors and creatives have joined together to make ‘We R not Virus’ – in part to call out and make a stand against racism.
These are 10 newly commissioned stories which will be performed this weekend and available through Zoom – more tickets are being made available this week.
The performances consist of film, poetry and dance and song, and is being produced by the Omnibus Theatre, an online outfit and Moongate Productions.
Among the performers is Daniel York Loh (pictured), the actor and activist who was, until quite recently, chair of Equity (the actors union) Committee on Diversity. Omnibus continue to put out work online and find out more about #WeRnotVirus below – it starts on Saturday (June 13) at 7pm and 3pm on Sunday (June 14) and is free – and keep a lookout on social media about more tickets with daily ticket releases.
More: https://www.omnibus-clapham.org/oto-we-r-not-virus/

Continuing uncertainty about when schools in England will be running as normal (or as near to normal as possible with the current regulations) means that you might be looking for more content to keep you little ones occupied during the lockdown.
We did report on Tara Arts dropping their tales from ‘The Panchatantra’ in the week that it first dropped and now they have added ‘The Donkey and the Rooster’, read by former ‘Eastenders’ star Nitin Ganatra (pictured).
A recent study showed that only four per cent of the nearly 10,000 children’s books published in the UK in 2017 had black, Asian, or minority ethnic characters (BAME). It dropped last week (June 5). For more info and to see ‘The Donkey and the Rooster’, click here – https://www.tara-arts.com/whats-on/the-donkey-and-the-rooster

To submit an entry for next week, please use hashtag #acvlockdownlistings and tag us on social media or email to editor@asianculturevulture.com for anything starting from next Thursday (June 18) and email us by 4pm on Tuesday (June 16). Thanks!

*Please note the text alignment does not appear as it should on some devices – apologies!