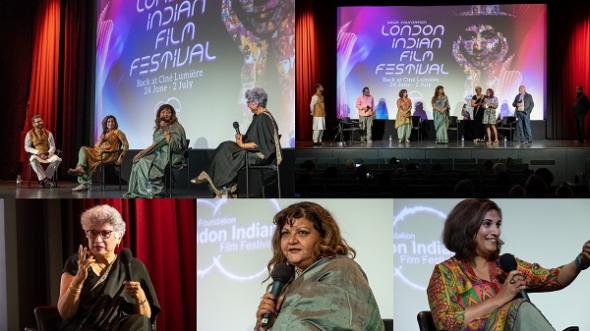 AND SO THE curtain came down on the London Indian Film Festival’s (LIFF) 11th edition last night (July 2) in London with the screening of the film, ‘Flight’.

Made for TV in 1997 with an all-star cast – many of the actors from the film were there for the screening at the Lumiere Cinema in South Kensington, and it wasn’t simply a nostalgia ride.

Writer Tanika Gupta is one of Britain’s best-known playwrights and remarked how there was no sense of career progression after she had written ‘Flight’ and she went into the theatre because there was more of structure to writing for the stage than there was for film.

This view – about the lack of a career structure – was also echoed by several of the actors who featured in this film very early in the careers and were also present last night.

The film was their big break, but didn’t necessarily lead to something cumulatively bigger for much of the talent involved – though many have gone onto become successful and established – for example, Nitin Sawhney composed the music for ‘Flight’.

The film, ‘Flight’ is set in the north of England with fine performances all around – especially Anwar as the spirited teenager, ‘Shika’ who falls in love with a good-looking Muslim guy (Ravi Kapoor) and then faces the wrath of her Hindu father, played by Roshan Seth, when the couple are rumbled by Anil (Kulvinder Ghir).

Ghir’s character goes on to track down Shika – who has escaped – to a women’s refuge in London. It there that she meets Vrinder (Sunetra Sarkar) and they form a close bond. Shika also befriends Meera Syal, as one of the refuge’s managers and a young mother, played by Nina Wadia.

Shika is only able to get away because her mother (Shaheen Khan) gives her the money and supports her daughter’s independence, especially in the face of her husband’s unwavering tyranny.

Gupta had spent time in a women’s refuge in Manchester, researching the story and said the film is rooted in an authenticity which continues to this day – with young girls and women having to seek sanctuary from the controlling men in their lives.

Ghir encouraged young people to persevere in telling their stories.

Liff continues in Birmingham and online until July 4.

*We will carry a wrap story with final reviews and reflections this coming week.

A video of the post screening on stage Q&A will be available from LIFF later….

To view (on desktops & tablets) click on picture and use arrows < > by moving cursor to the middle; to close picture, click x on top right; to close gallery, click outside the picture frame…
For caption only, hover cursor over picture. For mobiles, click on pictures to enlarge and read caption and flick through as above.