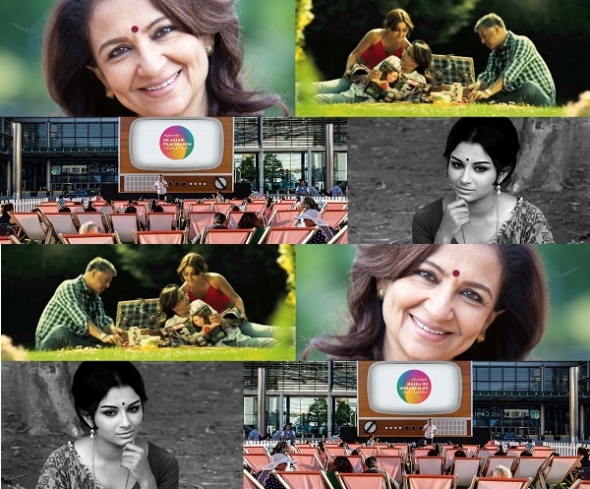 HERE’S your chance to get up close and personal to one of the undoubted icons of Indian cinema – Sharmila Tagore.

The star, who celebrates 60 years in the Indian film industry is all set to attend Sunday’s (July 7) screening of ‘Life goes on’ as part of the Tongues of Fire summer film programme of outdoor film events at Wembley Park. Entrance is free.

There will also be a tribute to one of the stars of ‘Life Goes on’. Girish Karnad was not just an actor but a director, writer, activist and intellectual. His death on June 10, led to an emotional outpouring, especially among the arts community, both in his native India and in the UK, where he spent much time and was director of the Nehru Centre (2000-3), the Indian High Commission’s cultural centre in Mayfair, London.

‘Life goes on’ is loosely based on Shakespeare’s ‘King Lear’ and the story revolves around an ageing father (Karnad), who has just become a widower after his wife (Tagore) passes away…the film charts how the family adapts to their loss and uses reverie, dream sequences and memories to articulate the narrative.

Tagore will be joined by UK-based director Sangeeta Datta and other members of the cast to talk about her screen roles – past and present.

Cast in her first movie ‘Apu Sansar’ (1959 ‘The World of Apu’) by the legendary Indian film director Satyajit Ray, Tagore went onto become a screen siren, marrying Nawab (Prince) Mansoor Ali Khan Pataudi, better known as Tiger Pataudi and India’s youngest ever cricket captain. Pataudi hailed from a royal family and the couple are widely considered to have embodied the idea of glamour. Pataudi died in 2011. Tagore is a UNICEF goodwill ambassador, and served as India’s Central Board of Classification of Films chief between 2004-2011, served on the international competition jury at the Cannes Film Festival in 2009 and was awarded the Padma Bhushan (the third highest civilian award) by the Indian government.

The couple cut a dashing presence from the mid-1960s, and had three children – two of whom have also become stars in their own right – Saif Ali Khan is a Bollywood pin-up and his marriage in 2012 to acting icon and scion of another famous family – Kareena Kapoor – only increased his celebrity status. Their son Taimur already has a following on social media.

Soha Ali Khan who stars in ‘Life goes on’, studied at Oxford University, and the London School of Economics, has appeared in several films and is the author a book, ‘The Perils of Being Moderately Famous’ (2017). She married in 2017 and gave birth to a daughter in the same year.

This screening is part of a summer season of South Asian films at Wembley Park and is organised by Tongues of Fire which is also behind the UK Asian Film Festival. This part of the season comes to an end on July 23.