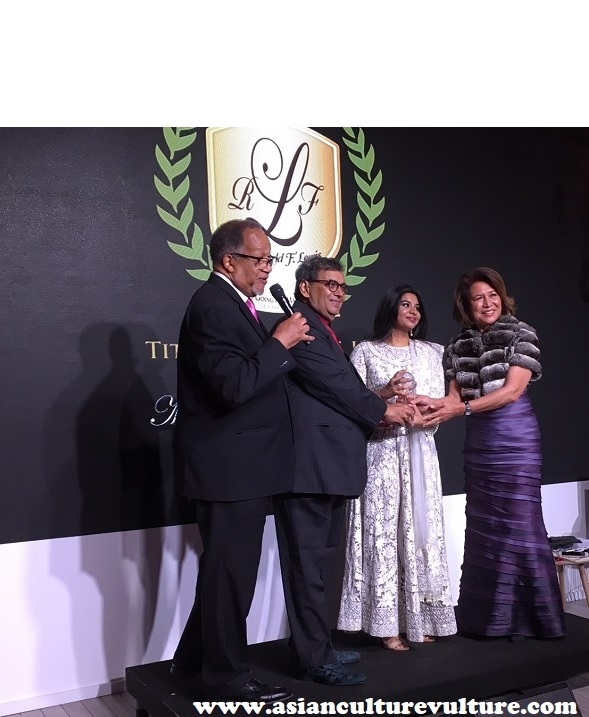 ONE OF THE GREAT icons of Indian cinema – Sridevi – was recognised in a special prizegiving ceremony at a private event promoting diversity – at the Cannes Film Festival on Wednesday evening (May 16).

The actress, who had a long career, accidentally drowned in a hotel bath earlier this year while attending a family wedding in Dubai.

Known for her versatility, range and depth as an actor, her rather sudden passing left a considerable emotional heft on film lovers, not just in India, but in many parts of the world where Indian cinema is followed and much revered.

Her niece Namrata Goel was on hand to collect the award as part of the Titan Reginald F Lewis Film Honours (which recognises diversity and excellence) at the glittering event at the Majestic Beach in Cannes.

Guests were treated to a three-minute film of some her most iconic roles. Husband Boney, and daughters Janhvi and Khushi were unable to travel to Cannes and remain in a state of mourning. Boney issued a statement and posted to his late wife’s Twitter account.

Many members of the Indian filmmaking fraternity still attending the festival were there to see the prizegiving.

Bollywood star Sonam Kapoor whose uncle Boney Kapoor was married to Sridevi, was unable to attend as she continued to fulfil commitments as a L’Oreal Paris ambassador.

Among those figures from the Indian filmmaking community were Subhash Ghai, a regular in Cannes and the director behind the film that many say helped Shah Rukh Khan establish himself in Bollywood, ‘Pardes’.

Ghai is understood to to be working on a biopic of the controversial late Indian godman, Osho (also referred to as Rajneesh Osho) and has a deal with an Italian production company, it has been reported.

As well as Indian filmmakers, there were many also from Nollywood, the Nigerian film industry and Afro-French filmmakers.

The audience initially watched a 30-minute documentary, ‘Pioneers: Reginald F Lewis and the making of a billion-dollar empire’.

Lewis is believed to have been the first African American ever admitted to Harvard Law School (former US President Barack Obama is also an alumni).

After leaving law school, Lewis joined a New York trading firm, eventually departing to set up on his own as an entrepreneur and achieve his goal of becoming one of America’s richest men and the first African American to make a billion dollars.

His investment in supermarkets, food and clothing saw him achieve his goals in the 1980s and he was an active champion of change, diversity and social progress. His company TLC (The Lewis Company) took over Beatrice Companies for $1 billion in 1987.

He was also close to the leadership of Democratic and civil rights champion Jesse Jackson and advocated many of the same causes and the two were good friends.

Lewis became more involved in France in 1988, moving there and looking after Beatrice concerns in Europe from his base near Paris. He died in in 1993, aged just 50 from a clot, after being diagnosed with brain cancer just months earlier.

Widow Loida Lewis was in attendance and was deeply touched by the number of people paying tribute and attending the event and prize-giving.

Among the other hosts were Dr Benjamin Chavis, CEO of the National Newspaper Publishers Association, and a close friend and business associate of Lewis.

Privacy & Cookies: This site uses cookies. By continuing to use this website, you agree to their use.
To find out more, including how to control cookies, see here: Cookie Policy
← ‘The Good Karma Hospital’ – back tonight promising an explosion (not literally, we think…) Preview
Director Bong Joon Ho at the BFI Southbank: ‘How I lied to Harvey Weinstein’, working methods and advice to aspiring directors… →