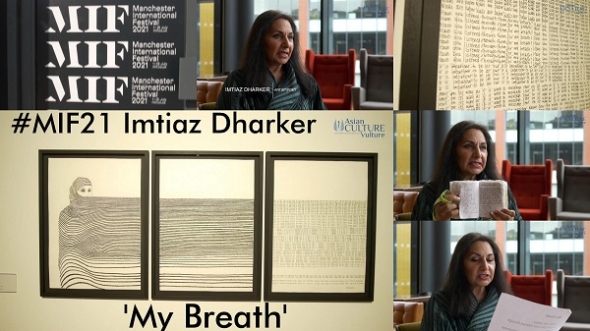 ARTIST Imtiaz Dharker talks to acv about her work currently on display at Manchester International Festival (July 1-18) and referred to online as #MIF21.

Her work appears as part of a specially curated strand, and as selected by Hans Ulrich Obrist (director of Serpentine Galleries, London) and poet/broadcaster, Lemn Sissay, entitled, ‘Poet Slash Artist’.

This sees some of the country’s leading writers and visual artists combine work that involves both images and words and defies traditional easy genre classifications.

In this interview, Dharker, talks about these ideas in relation to her original MIF21 poem/artwork, ‘My Breath’ and reads it out aloud at the end.

She also talks to acv’s Suman Bhuchar about her artistic process and how she often sees words and images and how they collapse into each other.

She reveals how her time in India inspired her to see the sharpness and contrast of the sun and its black and white effects and how this is borne out in her sketch work, notebook and final published poetry books.

Privacy & Cookies: This site uses cookies. By continuing to use this website, you agree to their use.
To find out more, including how to control cookies, see here: Cookie Policy
← Anish Kapoor – Some 60 exhibits and new controversial work at Gallerie dell’ Accademia and Palazzo Manfrin in Venice
‘Three Pounds in my pocket’ – Seminal BBC radio series on South Asian migrants goes deeper and gets more personal… →