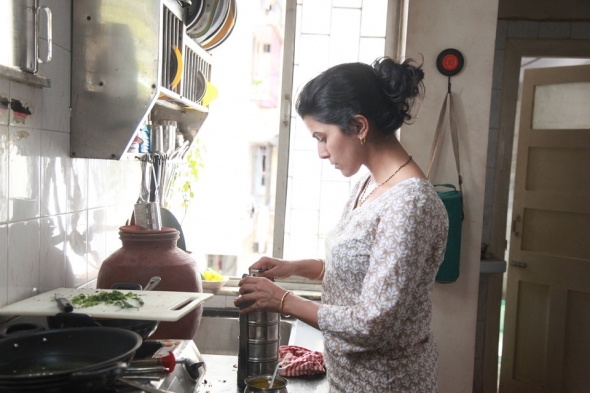 NIMRAT KAUR is a name to watch.

When she was in Cannes this year with ‘The Lunchbox’ (Dabba), she exuded a warmth, positivity and general good humour that was hard not to resist.

And she looked every inch the star in the making.

But you would hardly recognise any of that from her central character in ‘The Lunchbox’.

She plays a slightly dowdy housewife, who tries to invigorate her marriage through her husband’s stomach. But he is too caught up with his career to appreciate the concealed beauty and charm of the wife by his side.

Ila, as she is called in the film, finds inspiration in cooking and it helps to open up a world of romance and longing that has long since fled the centre of her rather mundane existence.

“I read the script and I knew I wanted to be part of it,” Nimrat Kaur told www.asianculturevulture.com in Cannes.

At that time, she had only appeared in ‘Peddlers’, an independent gritty production about a drug dealer, from the Anurag Kashyap stable of films. Very different.

“I’ve been doing a lot of plays in Bombay (Mumbai) for the last 8/9 years. It was very conscious. I was sure of what I didn’t want to do.”

Her father was in the Army and so pursuing a career in the arts was looked upon with some suspicion, she revealed.

“My mother keeps saying… ‘when are you going to be done with your hobby?’”

Since ‘The Lunchbox’, which won an audience award at Cannes, she has been getting more offers of work, but she planned to be careful and selective about the choices ahead.

“I am taking it slow and steady and am not in a hurry. I want to be here as long as I can. It’s not about doing 10 years of work and burning out and then disappearing and marrying an NRI (non-resident Indian),” she chuckled.

We’re pretty sure she won’t – she’s too smart and talented for that.

*The Lunchbox opens in India, September 20 and shows at the London Film Festival in competition on October 19 and October 20. A UK general release is expected later.