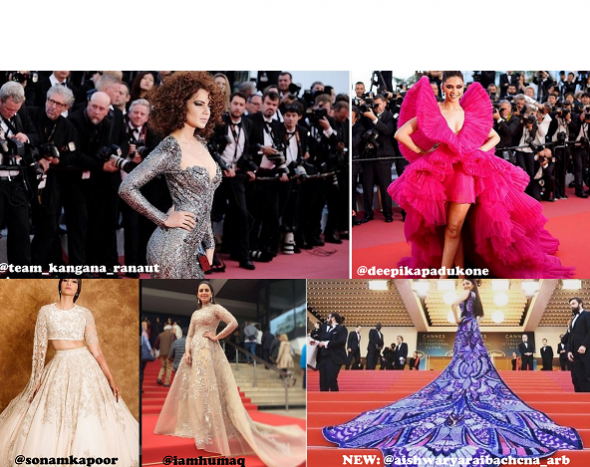 Our resident fashion expert finds much to admire about the Indian contingent at Cannes this year, but there were some big faux pas too she believes…

FORGET the movies. The Cannes Film Festival is a fashion spectacle like no other; the place the world’s fashionistas, including the leading ladies of Bollywood aspire to be seen at… and who can blame them? Cannes is the epitome of glamour, chicness and creativity, with outfits far more show-stopping than Oscar’s frocks, but not as eccentric as the statement pieces required for The Met Ball (usually held in the first week of May in New York).

For many years, Aishwarya Rai Bachchan has led the trends in how to master the art of Cannes dressing, turning up in all manner of dazzling haute couture. The press attention she receives has clearly peeked interest amongst her contemporaries. In recent years many Indian stars have followed suit, turning up to the South of France in all their finery with one simple aim: to get papped.

This year was no different with a host of Botown actress competing to make the biggest impact. The overwhelming winner of which was Deepika Padukone. Her Instagram feed was updated throughout the festival with her endless outfit changes; all of which she instantly nailed from ‘That Pink Dress’ by Ashi Studio, a lacey bridal inspired number by Zuhair Maurad to a sharp purple trouser suit by Mao and various floaty dresses, the ‘Padmaavat’ actress took wardrobe planning to another level.

Ash (or Aish) of course never fails, but what was so great was seeing her wearing Indian designer Manish… no, not the usual Bollywood choice of Malhotra, but the kind who’s all about creativity, colour and sparkle: Manish Arora. She wore his sequinned jackets for her casual appointments, while on the red carpet she once again showed her Indian heritage, wearing a peacock butterfly themed printed gown by Michael Cinco.

A post shared by AishwaryaRaiBachchan (@aishwaryaraibachchan_arb) on May 12, 2018 at 10:16am PDT

Shimmying onto the scene in silver, Kangana Ranaut made her Cannes debut wearing a disco jumpsuit by Nedret Taciroglu looking every inch the rockstar, superstar that she is.

Also making the trip to the French Riviera was Mallika Sherawat who opted for figure hugging dresses by Tone Ward Couture.

Taking a more classical approach, Huma Qureshi wore one of the more modest outfits seen this year, a classic princess dress followed by a striking beige and metallic suit but the strangest decision was opting for a red and white striped suit, looking oddly similar to Sonam Kapoor’s.

Perhaps Sonam’s fashion radar wasn’t switched on properly this year, fresh from her wedding day, her outfits weren’t as striking as the choices she’s known for and often admired. As great as it was to see her in France, a better strategy would have been to skip this year, go on honeymoon and not try so hard, but that’s celebrities for you.

Some just don’t know when enough is enough.

The personal views expressed in this piece do not necessarily reflect those of www.asianculturevulture.com

Huma Qureshi See our interview with Huma in Cannes here

A post shared by AishwaryaRaiBachchan (@aishwaryaraibachchan_arb) on May 12, 2018 at 10:15am PDT

Privacy & Cookies: This site uses cookies. By continuing to use this website, you agree to their use.
To find out more, including how to control cookies, see here: Cookie Policy
← Berlinale 70: Riz Ahmed in ‘Mogul Mowgli’ ; Indian indy smash ‘Eeb Allay Ooo’, ‘The Shepherdhess and Seven Songs’, and ‘Sthalpuran’ and filmmaker Rima Das in Berlin, as well Indian rugby film ‘Jungle Cry’…
The Bong effect; what happened to Diversity? →