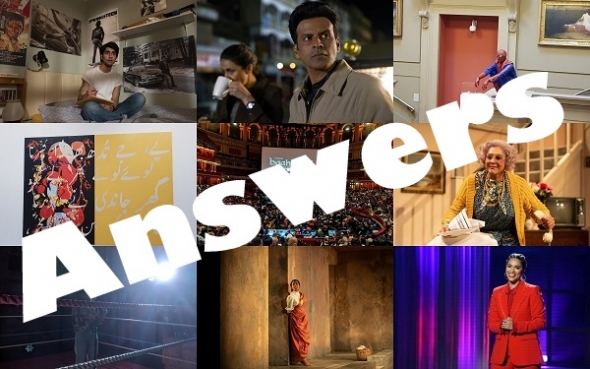 IT’S THAT time of year again where you can put you artistic wits to the test with our easy annual quiz.
Check out whether you know your art from your creative elbow and can busk it with the cognoscenti and show off at dinner parties or even get on Mastermind with your ‘special subject’!
No cheating now or consulting Google ….or any other internet based dictionary.
You will see most, if not quite all, of the answers are on www.asianculturevulture.com

Scoring
If you get the bonus question correctly, you will get 2 points, all other correct answers get 1 point.
If you get everything correct, you will get a maximum of 101 points.
Between 81-101 Congratulations! You’re a culturevulture genius and should definitely be applying for cultural diversity arts jobs that might come up in 2020…
41-80 You can definitely busk it in artistic circles with your art savvy credentials.
0-40. Mmmm. You just about know your art from your elbow but you need to get out more in 2020 and keep up to date with www.asianculturevulture.com!
So how did you fare? Answers are in bold…

1. Which Asian actor appeared in the film ‘Yesterday’ as the only man who remembers the Beatles?

2. Who was the first woman of Indian origin to win the Camera D’Or at the Cannes Film Festival

Bonus point: Name the film and the year. ‘Salaam Bombay’ 1988

3. ‘Blinded by the Light’ is a film based on the memoir of which journalist?

Bonus point: Name the title of the book. ‘Greetings from Bury Park’

5. Which film is the highest grossing Pakistani film of 2019 and featured Mahira Khan?

1. Which high-profile multi-arts festival that takes place in May was cancelled this year after nearly a decade?

2. Which Bollywood star made his first ever visit to Ireland to talk movies, producing and cricket?

3. Which Indian film had its world premiere at Berlinale 2019 (Berlin Film Festival) and was India’s entry to the 2020 Oscars?

Bonus point: Name the director of this film. Zoya Akhtar

4. A Youtube Star who began by making her videos in her bedroom smashed the glass ceiling by being asked to host her own show on American television. Who is she?

Bonus point: Name the show and the television network. ‘A Little Late With Lilly’, NBC

5. Name the photo journalist and activist who was recently released from prison and was one of the shortlisted nominees for 2019 Prix Pictet award

1.Who wrote and appeared in the play, ‘Does My Bomb Look Big in this’?

Bonus Point: Who wrote the play? ‘A Doll’s House’ by Ibsen and adapted by Tanika Gupta

3.Which play was inspired by a real-life story of a young man with a stammer?

4. Who stepped down after 40 years of running a theatre company and creating a unique venue in South London?

5. Who directed the play set in a taxi firm dealing with Asian masculinity?

Bonus point: Name the play and the writer. ‘Approaching Empty’ by Ishy Din

1.Which dancer/choreographer was a South Asian Dance Judge on the BBC Young Dancer 2019 show?

2. Which performance artist who has done Bruce Lee impersonations and been Spider Man and uses autobiography and humour to discuss identity, won a prestigious prize this year?

3. Which dance show inspired by The Mahabharata returned to the Roundhouse in London this year?

Bonus point: Name the writer of the text. Karthika Nair

4. Temple of Fine Arts is a male ensemble that performed at the Darbar Festival 2019 with a piece curated by which choreographer?

5. Who stepped down from the UK’s major’s South Asian Dance organisation this year?

Bonus point: What was the organisation originally called when it was founded in 1979? Academy of Indian Dance

1. Who performed and produced the music theatre show on the daughter of Tansen (considered to be the ‘father of Indian classical music’)?

Bonus point: Name the title of the show. ‘Saraswati: Forgotten Daughter of Taansen‘

2. Which composer and producer artist celebrated 20 years of a music album with a live concert this year?

Bonus point: Name the album and the venue of the concert. ‘Beyond Skin’ at the Royal Albert Hall

3. She is known as one of the great ‘mystic singers’ who performs Qawwali, Kafis and Bulleh Shah poetry and it delighted audiences at the Barbican this year. Who is she?

4. SS Rajamouli’s film, ‘Bahubali: The Beginning’ Live conducted by The Royal Philharmonic Concert Orchestra was a big hit at that Royal Albert Hall. Can you name the conductor who reprised the score?

Bonus point: Name the composer of the score. MM Keeravaani

5. Which British filmmaker was a castaway on a BBC radio programme and made a documentary about an artist of one of the tracks selected?

1. Which Asian poet was awarded the ‘Outspoken Prize 2019’ and also presented a programme on television dealing with mental health in young people?

2. What is the real name of the spoken word artist and rapper called ‘Humble the poet’?

Bonus point: Name the title of his latest book. ‘Things that no one can teach us’

3. What is the novel by Salman Rushidie shortlisted in this year’s Booker Prize 2019?

5. What is the Jhalak Prize and who is it awarded to?

a) International prize awarded to writers writing about South Asian themes
b) Celebrating books by British /British resident BAME writers of colour from the UK.
c) Writers writing in the English language under the age of 40.
d) Britain’s oldest literature award given for fiction, biography and drama.
e) Celebrating women writers who have written for theatre.

Bonus Point: Name the winning author and title of 2019. Guy Gunaratne – ‘In Our Mad and Furious City’

1. Who is the leading actor working secretly in the Intelligence Service in the Indian TV series on Amazon Prime, ‘The Family Man’?

3. Who presented ‘The Curry House kid’ and what is it about?

4. Which Asian actor appears in the Ricky Gervais series, ‘After Life’?

Bonus point: Name the character she plays and her job. She plays a local newspaper journalist called Sandy

5. Who appeared in the hit BBC TV series ‘Bodyguard’ as a detective?

1. Which British Asian comedian writes and appears in the television series, ‘Man Like Mobeen’?

2. Who plays ‘Dotty Otley’ in the comedy farce revival of ‘Noises Off’ currently running at the Garrick Theatre, London?

3. Name one of the Funny lassies who appeared at the Glasgow International Comedy Festival and also known as ‘The Asian Ellen DeGeneres’

5. Name the comedian and presenter, who was booed and had bread thrown at him at a charity cricket launch?

1.Which British Asian artist held a solo exhibition at the Saatchi Gallery earlier this year?

Bonus Point: Name the title of the exhibition. ‘Saiful Malook’

2. Which artist had an installation exhibition at the Tate Gallery using archive to see how they reflect the British Asian story?

Bonus Point: Name the title of the exhibition. ‘Lead White’

3. Where does the multi-media artist Chila Kumari Burman who works in print, mixed media, photography and painting come from?

4. Name the title of the exhibition curated by historian William Dalrymple?

a) Forgotten Masters: Indian Paintings for the East India Company
b) Invisible Narratives
c) Dora Maar
d) For Corners of One Cloth: Textiles From the Islamic World
e) Homelands: Art from Bangladesh, India and Pakistan

5. Queen Victoria was the subject of two exhibitions at Kensington Palace in 2019 – in fact it is still on until January 5 2020. What anniversary does this mark?

How did you get on?

Privacy & Cookies: This site uses cookies. By continuing to use this website, you agree to their use.
To find out more, including how to control cookies, see here: Cookie Policy
← ‘Bandish Bandits’ – Meet Shreya Chaudhry, Ritwik Bhowmik and director Anand Tiwari (video)
Tara Arts – new head Abdul Shayek outlines vision for more diverse, inclusive, and imaginative theatre in the UK… →